Kent City’s dream season came up just short of winning a state championship, falling to top-ranked Grass Lake, 52-50, in the Division 3 championship game Friday afternoon at the Breslin Center on the campus of Michigan State University.

The Eagles scored first when Taryn Preston hit the first of her two three-pointers on the day, and they scored the final two points of the first quarter when Kenzie Bowers did a step-back jumper as time ran out to give Kent City an 18-14 lead heading to the second quarter of play.

Grass Lake took control of the second quarter with a 10-3 run forcing Kent City to call timeout trailing 24-21 with 3:35 remaining in the first half. The Warriors scored the next two baskets increasing their lead to seven before Lexie Bowers hit her second three-pointer of the quarter to cut the Eagle deficit to four, 28-24.  Grass Lake scored the final two points of the first half to lead, 30-24, at halftime.

Grass Lake extended its lead to twelve, 36-24, after a pair of three-point plays early in the second half.  Jenna Harrison nailed a triple which was followed up by Emma Geers scoring as the trailer on the fast break, and Grass Lake quickly called timeout with their lead now down to seven, 36-29, with 4:58 to play in the third quarter.

After a series of held balls seeing the alternating possession rule get a workout, Maddie Geers connected from outside the arc to cut the Warriors lead to 36-32 with a little over two minutes remaining in quarter number three.  Grass Lake answered with a pair of field goals pushing its lead back to eight points, but Kenzie Bowers scored on a runner in the lane sending the teams to the final quarter with Grass Lake leading, 40-34.

The Warriors once again extended their lead to double digits, 44-34, by scoring the first two baskets of the fourth quarter after converting on a Kent City turnover and then a fast break following a missed shot by the Eagles.  Kent City responded once again with Kenzie Bowers connecting on a deep three to cut the lead to seven with five minutes remaining in the game.

Kenzie Bowers stole the ball once again and drove to the basket and was fouled while attempting a layup.  The ball rolled around the rim, but stayed out sending her to the line for two shots.  After connecting on one of two free throws, the Eagles were down just two points, 46-44, with 2:11 left in the game.

After a Grass Lake basket, Maddie Geers scored inside to again pull Kent City within two points, 48-46, with just :55 showing on the clock.  After Grass Lake failed to score, Kenzie Bowers drove down the side of the lane and could not get her layup to fall.

After a pair of Grass Lake free throws extended their lead back to four points,  Kenzie Bowers scored with a scoop shot off of a drive making it a two-point game, 50-48.  The Eagles fouled Grass Lake with ten seconds remaining, and a pair of free throws made it a two-possession game at 52-48.

After a pair of Grass Lake fouls forced the Eagles to inbound the ball two more times in those final seconds, a putback basket by Jenna Harrison off a missed Eagle three-point attempt made the final score, 52-50.

The Eagles finished the year at 21-1. The Eagles will also see Alyssa Larson graduate this year after being unable to play her senior season due to a preseason injury. 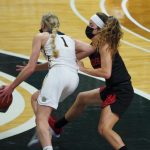