Kent City made the most of its first-ever trip to the final four with a 59-53 victory over previously unbeaten Calumet on Wednesday afternoon at the Breslin Center on the campus of Michigan State University. The win sends the undefeated Eagles (21-0) to the Division 3 state championship game on Friday afternoon where they will take on once-beaten Grass Lake (19-1).  Game time Friday is 3:00.

The two teams struggled to score early, although much of that had to do with the defensive pressure being applied by both teams.  When all was said and done, the two teams were tied at 7-7 after the first quarter.

Kent City’s first quarter points all came from girls with the last name Geers.  Maddie scored the first two points for the Eagles on the break with a nice pass from Kenzie Bowers and then gave Kent City its first lead when she took another nice pass along the lane, this time from sister Emma.  Emma then scored her first point making one of two from the line after securing an offensive rebound, and then she scored inside off of a well-executed inbounds play along the baseline.

Jenna Harrison connected from outside the arc on the team’s first possession of the second quarter to give Kent City a 10-7 lead. Calumet scored the next eight points with a pair of threes and another field goal sandwiched in between to lead by five.

Kenzie Bowers stopped the Calumet run with a layup, but the lead went back to five after a pair of Calumet free throws. That’s when Lexie Bowers hit two triples and added a free throw to help spark a 12-2 Kent City run giving the Eagles a 24-19 lead. The run included Emma Geers scoring inside on a pass from Kenzie Bowers who also connected for three after the offense swung the ball around for the open look.

Calumet scored the final three points of the first half, all from the free throw line.  The teams went to their locker rooms with the Eagles leading, 24-22.

The third quarter began with Calumet scoring six straight points to lead, 28-24.  That’s when the Eagles changed the momentum of the game, outscoring Calumet 25-13 the rest of the quarter.

The third-quarter rally began when Jenna Harrison scored the first points for Kent City in the second half with an old-fashioned three-point play on a drive from the right wing. Maddie Geers then connected from outside the arc, and Kenzie Bowers turned a steal near half court into a layup giving the Eagles a 32-28 lead that then grew to 49-41 heading to the fourth quarter when Jenna Harrison connected on a triple at the buzzer.

The fourth quarter began with Maddie Geers scoring on a runner in the lane and then adding a free throw after an offensive rebound forcing Calumet to call a timeout with 6:29 remaining in the game and Kent City leading 52-41.  Kent City slowed the tempo down, and Calumet saw the lead reach eleven again when Kenzie Bowers hit a pair of free throws after several fouls while attempting to get a steal put the Eagles in the bonus.

Some steals and timely threes by Calumet, along with some missed opporunties at the line by Kent City, saw the lead shrink to just four points at 54-50 with under two minutes remaining. Kenzie Bowers was fouled and went to the line once again, and she again made both to give Kent City a six-point lead at 56-50.

After a pair of Calumet shots, Maddie Geers collected a defensive rebound to regain possession for Kent City. Calumet fouled then Jenna Harrison, who then made one of two to free throws to give the Eagles a 57-50 lead with fifty seconds remaining.

Calumet came down and launched a deep three that hit nothing but net, cutting the Kent City lead to just four points, 57-53, with 37 seconds to go in the fourth quarter.  A near turnover by Kenzie Bowers that saw her dive to regain possession for the Eagles and get the ball from a prone position to Jenna Harrison who was then fouled with 24 seconds to go. Jenna made both free throws giving Kent City its final margin of victory, 59-53, as Calumet missed a three-pointer and Kent City was able to run out the clock. 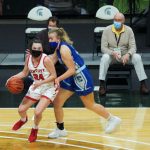