The Kent City Eagles used three of their ten three-pointers on the night to break open the game early in the fourth quarter and advance to the regional final on Wednesday night with a 53-37 victory over Western Michigan Christian Monday in the Division 3 regional taking place at Calvin Christian High School.
The Eagles led by three points after the first quarter before extending the lead to seven in the second quarter, but a 6-0 run to end the half left Kent City leading Western Michigan Christian by a single point, 17-16, at halftime.
Kent City extended its lead in the second half and went on to lead, 34-26, as the third quarter ended.  However, the Warriors scored first in the fourth quarter to make it just a six-point margin, 34-28.
That’s when Jenna Harrison hit two of her five three-pointers with yet another Kent City triple by Maddie Geers sandwiched in between as the Eagles quickly found themselves leading by fifteen points, 43-28.
Seniors Jenna Harrison and Kenzie Bowers led the Eagles in scoring with 21 and 19 points, respectively.  Lexie Bowers finished with eight points, and Maddie Geers added five points.
The victory improves Kent City’s record to 18-0 and sends the Eagles to the regional final on Wednesday night where they will face Covenant Christian. The game is set for 7:00 at Calvin Christian High School. 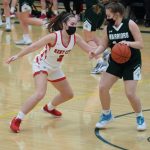 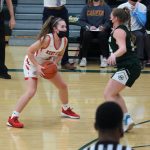 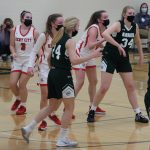