March Madness is right.   The final full week of March brought some added madness to an already maddening pandemic.   Kent City is down to one winter sports team still competing, but will not be short of stories from last week, some good and some not so good.   We are very pleased to have the opportunity to “complete” our winter seasons, which were in question as late as February.   That seems like ages ago now, but we made it, and with the exception of the varsity girls basketball team, we now know how this crazy story ends.

For the varsity girls bowling team, the season is complete for 2021, but far from over.   Kent City moved up to division 3 this season and found themselves up against much tougher competition at the MHSAA State Finals on Friday.   This did not phase the Eagles who featured one junior, and five sophomores as they tried again to qualify for the match-play as they did in 2020.   Not only did they qualify, but they entered the team vs. team tournament as the 6th seed, two spots higher than their 8th seed last year.   In their opening match-up against third seeded Jonesville, it just was not in the cards for Kent City.   The Comets seemed to have an answer for every Eagle run, holding Kent City at bay, 1218-1080.

If you are like me and like to dive into the numbers, a quick comparison to the Division 4 results shows the improvement from last year’s State Runner-Up Eagle team to this year’s 6th place team.   Kent City’s 2,846 qualifying performance would have qualified them as the 2nd seed in this year’s D4 tournament, behind last year’s champion, Bronson.   Kent City’s 1,080 in the match-play vs. Jonesville would have won the championship match as well over Traverse City Christian, who Kent City defeated in the semi-finals last year.   Our two individual qualifiers, Peytin and Madi Brake were 18 (34th) and 11 (27th) spots from making the cut following the qualifier.  In Division 4, the sisters both make the cut.   There is one thing for sure, regardless of the division in 2022, the team will continue to put in the work in the off-season and will be back and ready for another run!

The same argument could be made for our varsity wrestling team this year.   Kent City captured a District championship for the first time since 2018, but came up short in the Regional semi-finals against Comstock Park.   A back and forth match, Kent City held a slight lead going into the final match but were unable to hold on, losing 35-31.  To add to the “madness” in the finals between Whitehall and Comstock Park, the lights went out in the Nest.   To add to the craziness, Kent City found out they would be hosting the event 24 hours prior because of COVID at Orchard View.   We brought the two teams down to the wrestling room where emergency lights and the waning daylight allowed us to finish up the Regional championship.

Looking at the results from Division 4 also has the Eagles wondering, what might have been as our western neighbors earned a Regional championship and are headed to the Finals this week at Van Andel Arena.   There is no guarantee we would have beaten them, but we would have certainly loved to have a shot.   At the individual Regionals, four wrestlers (Zane Kik, Mason Westbrook, Bradley Brooks, and Brayden Armstrong) made it to the “blood-rounds” with an opportunity to advance, however, all four suffered a loss ending their seasons.

One team that did not change divisions in 2020-21 is the varsity girls basketball team.  The Eagles picked up their fourth consecutive District championship with wins over White Cloud and conference arch-nemesis Morley Stanwood.  In the semi-finals, Kent City jumped out to a 34-9 first half lead over the host school.   Then in the second half, the Indians were held to just 5 points as Kent City advanced with a 57-14 win.  On Friday, Kent City jumped on the Mohawks right from the opening possession. defeating Morley Stanwood 63-32.   Senior Kenzie Bowers led Kent City with 21 points in both games.

The varsity boys basketball team picked up a win last week as well in the District quarterfinals with a 63-39 victory over Grand Rapids Wellspring.   Sophomore Kyler Larson was the leading scorer with 12 points.   Kent City fell short in the semi-finals, losing to Carson City Crystal 41-38.

We are getting a clearer picture of what will be expected of our spring student-athletes as we navigate this pandemic.   All spring sports athletes (13 and older) will be tested once a week starting April 5 (if practicing over spring break).   We are going to need everyone’s help to make this work, beginning with a permission slip and code of conduct signed and returned by Thursday, April 1 so we can begin planning to hit the ground running when we return on Monday, April 12.   Here are links to those forms:

The other protocols are very similar to what we have been following all year.   Proper use of masks when social distancing can not be maintained, hand washing, daily screeners, and most importantly staying home when someone is not feeling well!   We want to give our spring student-athletes the opportunity to finish their season, especially considering we were unable to play in 2020!

Here are links to all of our schedules  which we will keep up-to-date as changes occur:
Varsity Girls Basketball
Varsity Boys Golf 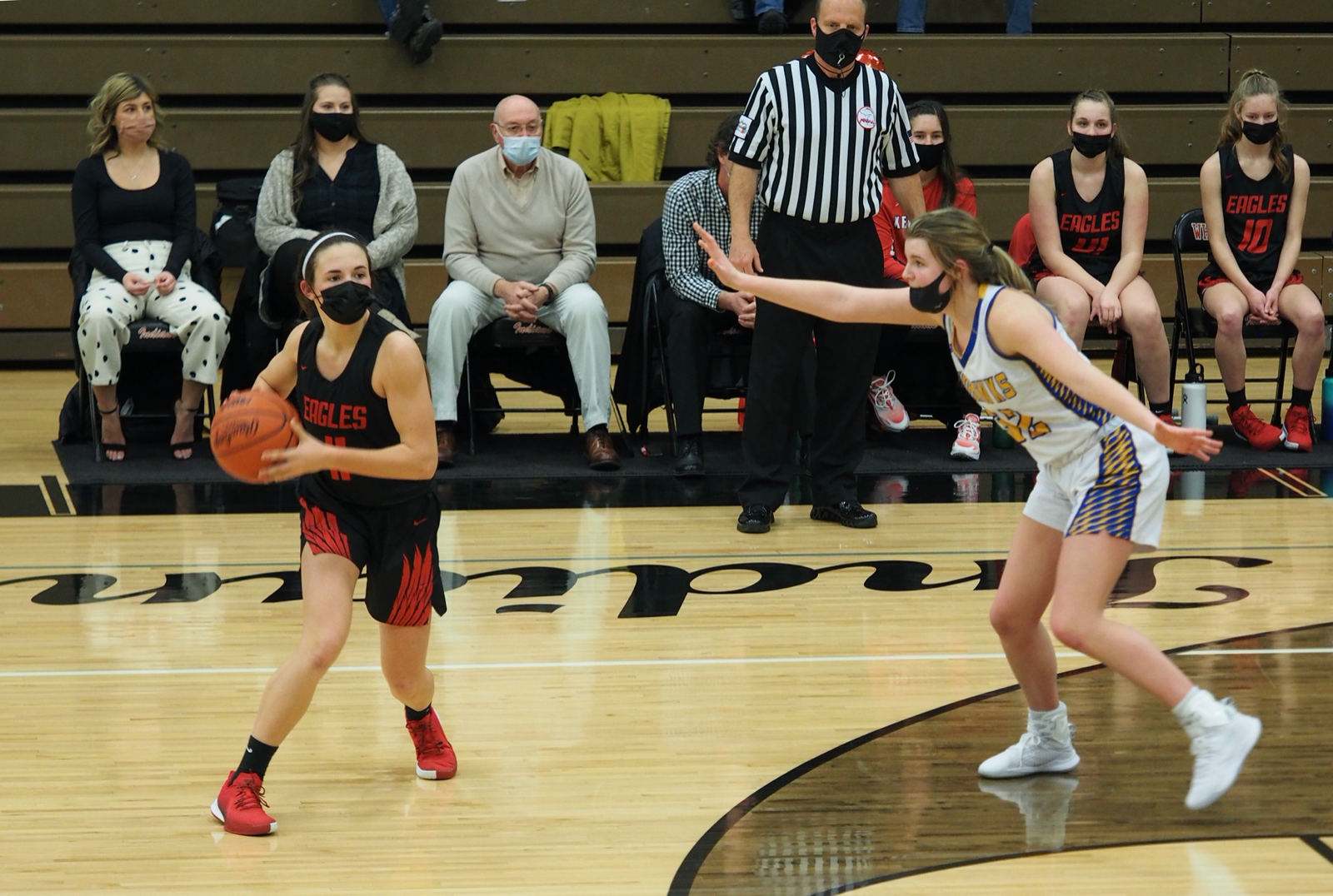 Varsity Girls Basketball @ MHSAA Regionals (at Calvin Christian) vs. WMC
Monday, March 29, 2021 @ 7:00 p.m.
The varsity girls basketball team will face a familiar foe on Monday night at Calvin Christian when they take on the Warriors of West Michigan Christian.   Over the past four seasons, Kent City has faced off with WMC two times, beating the Warriors in both meetings: winning 56-39 in 2017-2018 and again 59-31 in 2018-2019, both victories secured District championships.   Last year, West Michigan Christian won their District and then fell to Ithaca in the Regional Semi-Finals, shortly after Pewamo-Westphalia ended the Eagles’ season.   In 2021, the Warriors are 17-1 and have been improving as the season progresses.   West Michigan Christian lost to Ludington early in the season (45-32), but then turned around and beat the Orioles (49-34).   The Eagles and Warriors share two common opponents: Covenant Christian and Hart . . . both teams won those meetings.  Monday’s game will be a tale of two styles.   We know the Eagles fast-paced style . . . the Warriors are big and will look to get the ball inside and use their height to their advantage.

Here is the rest of this week’s schedule: