The writing team has also been in action throughout the winter, winning their first event.  This group is awaiting results from their second competition with hopes of capturing their second consecutive CSAA championship.  We are proud of the excellence at Kent City Community Schools in both athletics and academics.   It is part of the Kent City advantage, the opportunity our students have to experience multiple activities at a high level of achievement.

The bowling teams also started their jamborees over the weekend to determine all conference in the CSAA Silver.   Kent City has a stranglehold on the league this season with nine bowlers (boys and girls) in position to earn either first team (finish 1-4) or honorable mention (finish 5-8) in the CSAA Silver.   The girls’ team was not messing around on Saturday as they have the top four bowlers in the conference, two of which would be in the top four on the boys side as well!   Junior Peytin Brake currently sits in 1st place for both pins and average after averaging a 174.6 in six games.   Also in contention for 1st team honors are sophomore Madilyn Brake (170.3 average), sophomore Lauren Witt (159.83 average), and sophomore Abby Pecynski (156.3 average).   During the week, Kent City suffered their first loss of the season to Division 2 Whitehall, but picked up a win over Muskegon Oakridge on Wednesday.  They are currently 13-1 overall.

Our boys bowling team also had a great day at Northway Lanes on Saturday, ending the day with five bowlers in contention for all-conference honors.   Ty Pyne finished in the second spot after six games with an average of 187.  In third place and looking to move up from honorable mention last year, to first team this season, is Denver Golden who averaged a 166.8.   The next three Eagles were Curtis Poling (151.3 average), Jud Weber (150.3 average), and Webb Longcore (149.16 average).   In the Coastal Conference, Kent City also remains unscathed easily defeating both Whitehall (27-3) and Muskegon Oakridge (28-2) this past week to improve their record to 13-0.   Sophomore Corey Pecynski recorded the high score against Whitehall with a 214, while senior Ty Pyne bowled a 239 against Muskegon Oakridge.

The other undefeated team at Kent City is the girls basketball team.   Kent City added three more wins last week with victories over Hopkins (84-29), White Cloud (54-14), and Covenant Christian (56-36).  Senior Kenzie Bowers led all scorers in Kent City’s victories over Hopkins and White Cloud with 26 and 14 points respectively.   In what proved to be a closer game on Saturday against the 5-1 Chargers, Kent City used a 17 point performance by Maddie Geers to secure the victory, their ninth on the season.

The varsity boys basketball team remains in contention for a CSAA Silver title after defeating White Cloud on Friday, 53-41.   Following a dismal first half performance, plagued by turnovers, Kent City outscored White Cloud 23-7 in the 3rd quarter to put the game out of reach.   Sophomore Kyler Larson had a team high 16 points for Kent City, who improved to 4-3 overall and 3-1 in the conference.

Finally, our newest addition to our winter sports teams: hockey is also in contention for a league title.   Kent City’s Brock Hearth is a member of the Kent City/Kenowa Hills co-op hockey team who just improved their overall record to 6-2 over the weekend and a perfect record in the Fischer Division of the O.K. Conference.   Hearth is the team’s center and has brought a lot of experience from travel hockey to this school team. 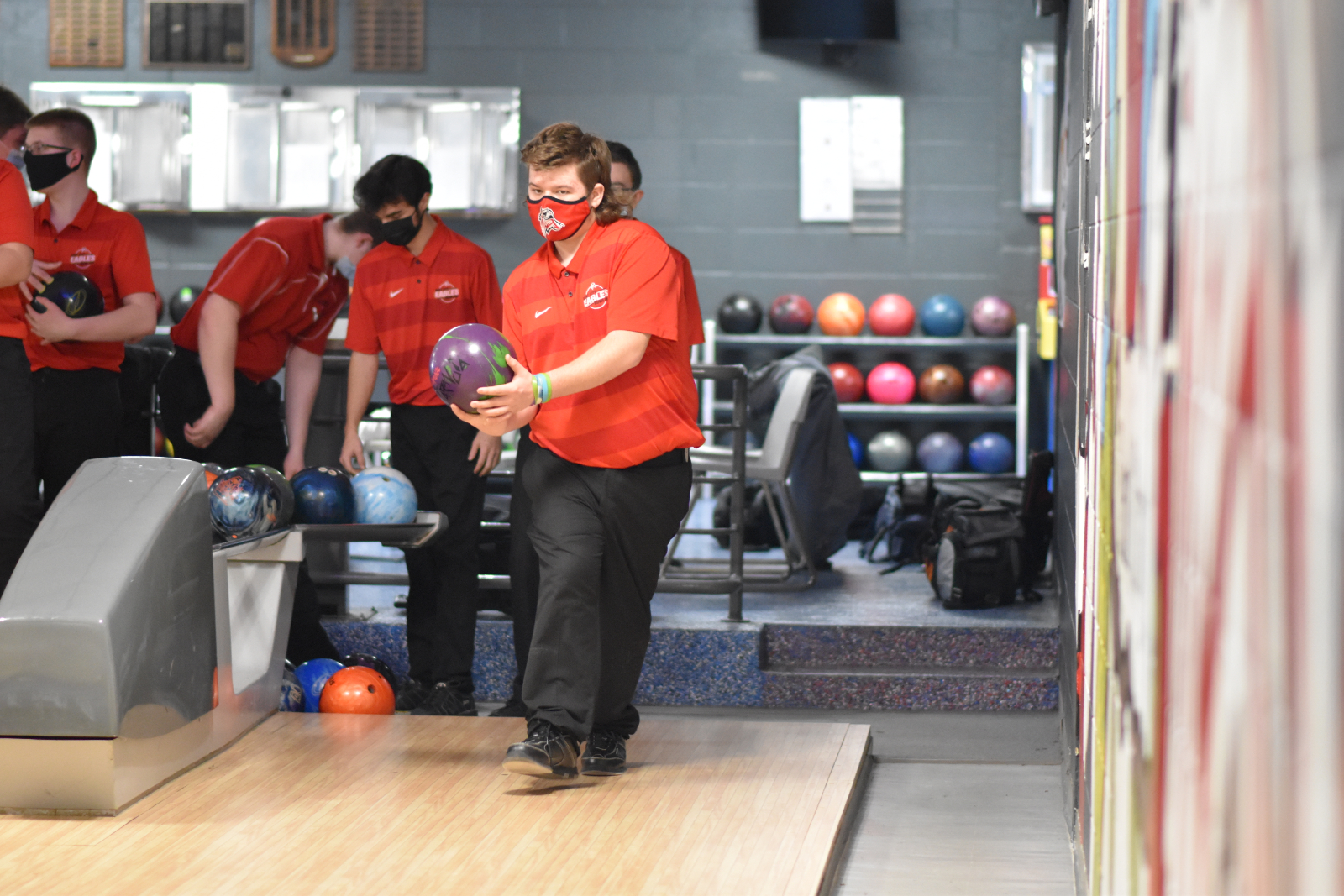 Varsity Boys Bowling vs. West Michigan Christian (Sparta Lanes)
Monday, March 1, 2021 @ 3:00 p.m.
The varsity boys bowling team will host West Michigan Christian at Sparta Lanes on Monday with a chance to take the lead in the Coastal Conference with a win over the Warriors.  Currently, Kent City and WMC remain unbeaten within the conference each with a 6-0 records.  Looking at individual bowlers, it would appear that WMC has the slight edge with a 149.14 average, compared to a 144.71 for Kent City.  However, this is the average for seven bowlers and only five will compete on Monday.   The Eagles have the advantage at the top of their line-up with their top three bowlers having a higher average than WMC’s 1st bowler.  In fact, Kent City’s top three bowlers are averaging a 188 while the Warriors’ first three are bowling a 159.   Kent City’s fate will lie with the fourth and fifth bowlers, who, as of late have been on fire.   A big day from Denver Golden, Webb Longcore, Cory Pecynski, and/or Devin Bair could put the Eagles over the top.   The other factor to consider is Kent City has already defeated Orchard View in an extremely close, come from behind win, while WMC has yet to bowl against the Cardinals.   The easiest thing for Kent City to do though, would be to just get the job done on Monday! 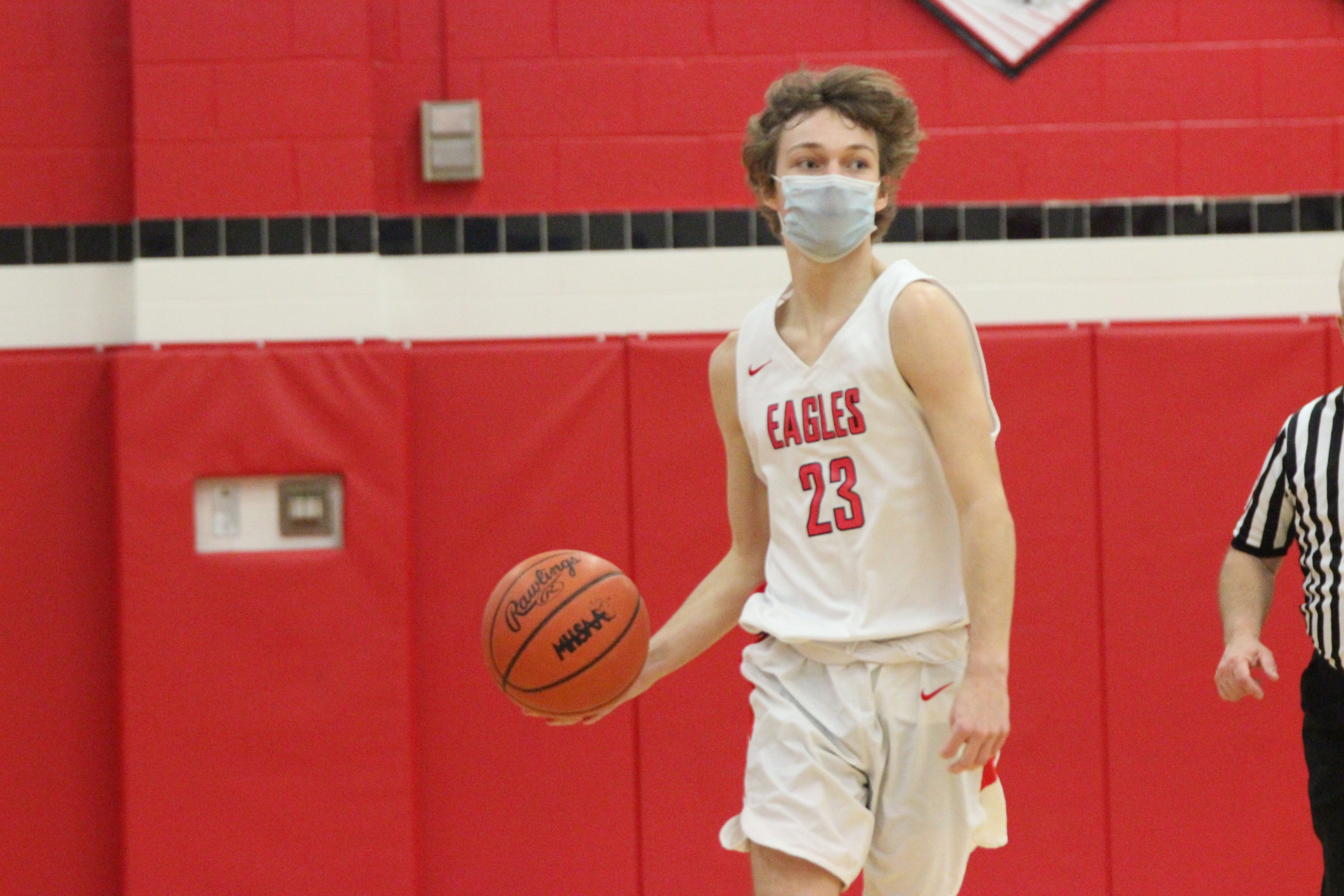 Varsity Boys Basketball @ Holton
Friday, March 5, 2021 @ 7:00 p.m.
On Friday, the Eagles will have a chance to redeem themselves, as they travel to Holton to take on the league leading Red Devils.   In their first meeting, Kent City came up short, losing 42-38 in a less than perfect performance.   Prior to the rematch, the Eagles will welcome conference arch-nemesis Morley Stanwood into the Nest on Wednesday, a game Kent City must win or Friday’s game will be a moot point.  The Mohawks are 4-4 on the season and, like the Eagles, 3-1 in the CSAA Silver with their only loss to Holton.   Expect a tight game on Wednesday and again on Friday.  Both games will come down to Kent City’s ability to take care of the basketball.   Turnovers have haunted Kent City, leading to two of their three losses and a slow first half against White Cloud on Friday.   Coach Ingles will have the team ready to play defensively, in fact, Kent City is surrendering an average of just 44.29 points per game this season.   However, squandering opportunities on offense due to turnovers and giving the opposition more chances, will not bode well for the Eagles. 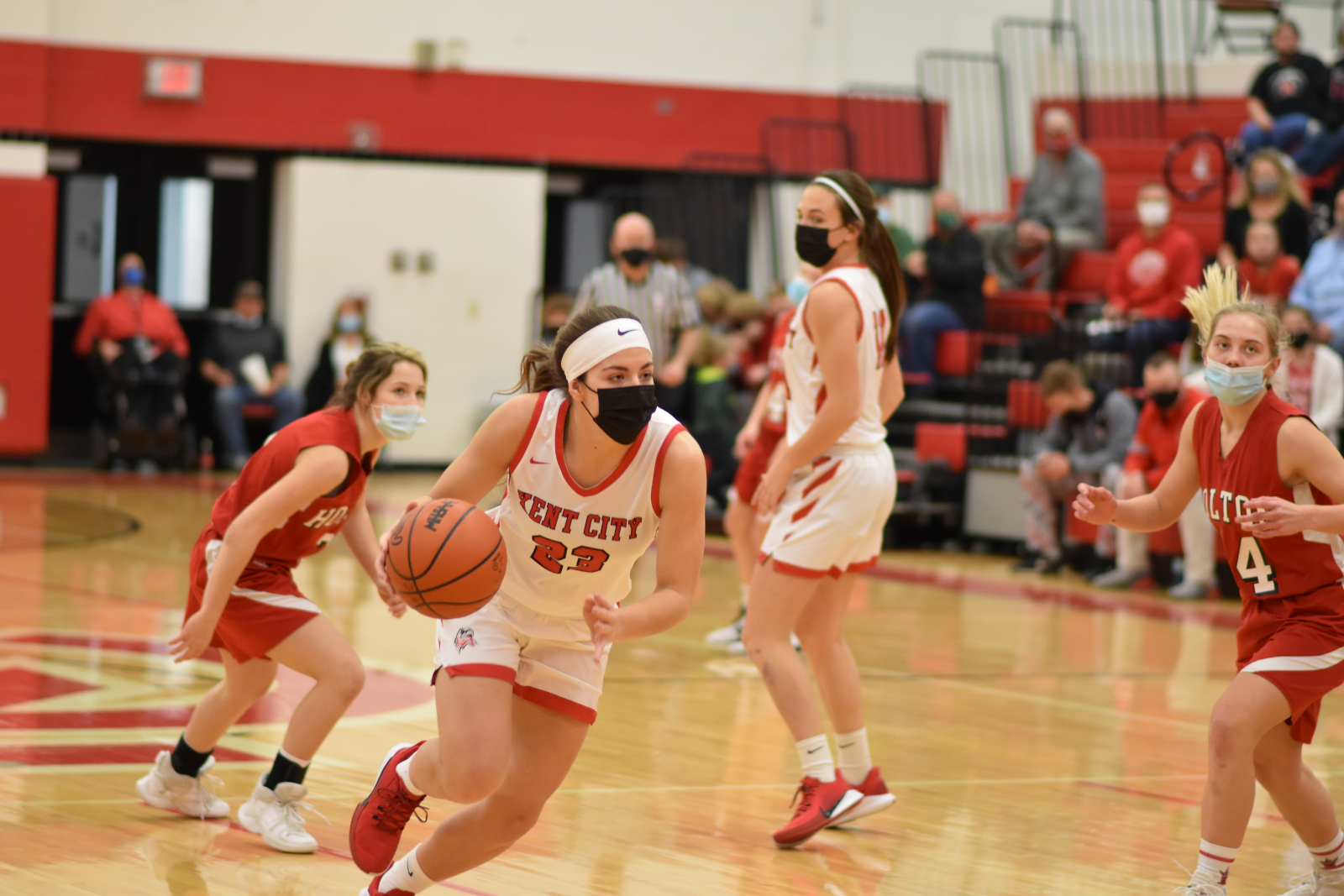 Varsity Girls Basketball @ East Grand Rapids
Saturday, March 6, 2021 @ 3:00 p.m.
Saturday’s game at East Grand Rapids has been in the making for sometime now. When the season initially started, the Pioneers were not on the schedule. We contacted EGR after the first delay and had a date all-set. A second reshuffle nixed that game because of conference conflicts for both schools. After the third (and fourth) COVID shuffles, we were in contact again trying to make it work, but to no avail. The fifth time is the charm? East Grand Rapids had a slot open up, so we did some shuffling in our schedule (for the betterment of all involved I might add) and voila, we are back on! EGR will be one of the toughest opponents our girls basketball team has ever played, and not just in 2021. With all the rankings and college bound players aside, Saturday’s game will feature two teams who are going to play high pressure, opportunistic defenses, but also have the ability to score from anywhere on the court. Taking care of the basketball and rebounding will be huge! The team with the most 2nd chance points will be victorious in this match-up.

Here is the rest of this week’s schedule: