The girls’ cross country team was so grateful to make it to the end of this crazy season and was able to end their season on a very positive note.  For the fourth straight year, the girls raced as a team at the Michigan International Speedway, the site of the cross country state finals.  This year however, the format was different, as the field was split into two races to limit the number of runners per race.  Kent City raced with all of the top individuals as well as the third place teams from every region. 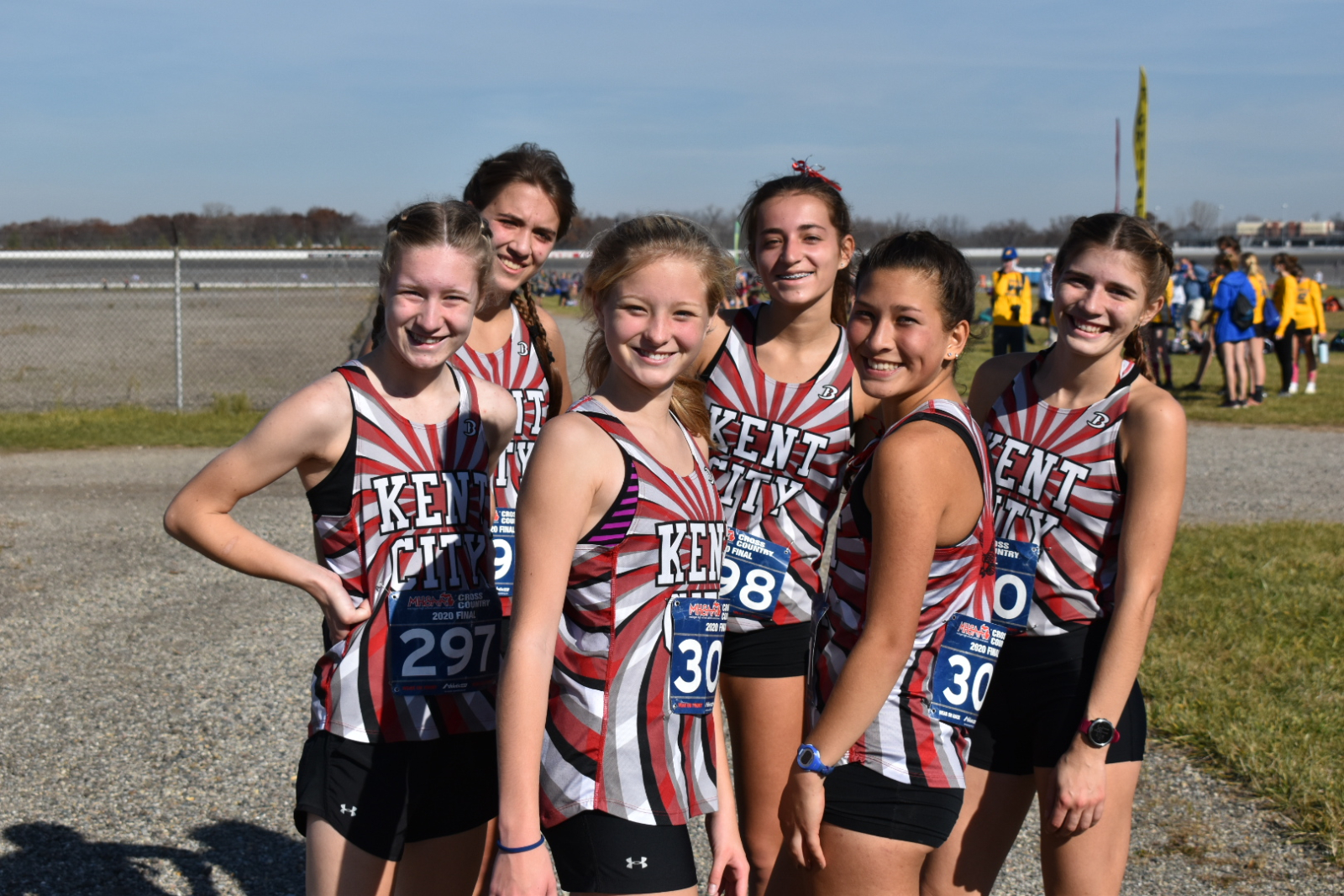 After the initial race, the Eagles were in second place as a team.  Senior Layla Martini really worked hard to stay near two other top runners and willed herself to finish 4th in 19:17.  Junior Alyeska Linsley gave it her all and finished 13th in 20:07.  Fellow junior Emily Lantzer (66th) and freshman Isabella Max (70th) came in within the same pack or “string” of runners.  Freshman Gracie Houtman (81st) and junior Kierra Flegel (95th) were the fifth and sixth Eagles to make it to the pit row finish line. 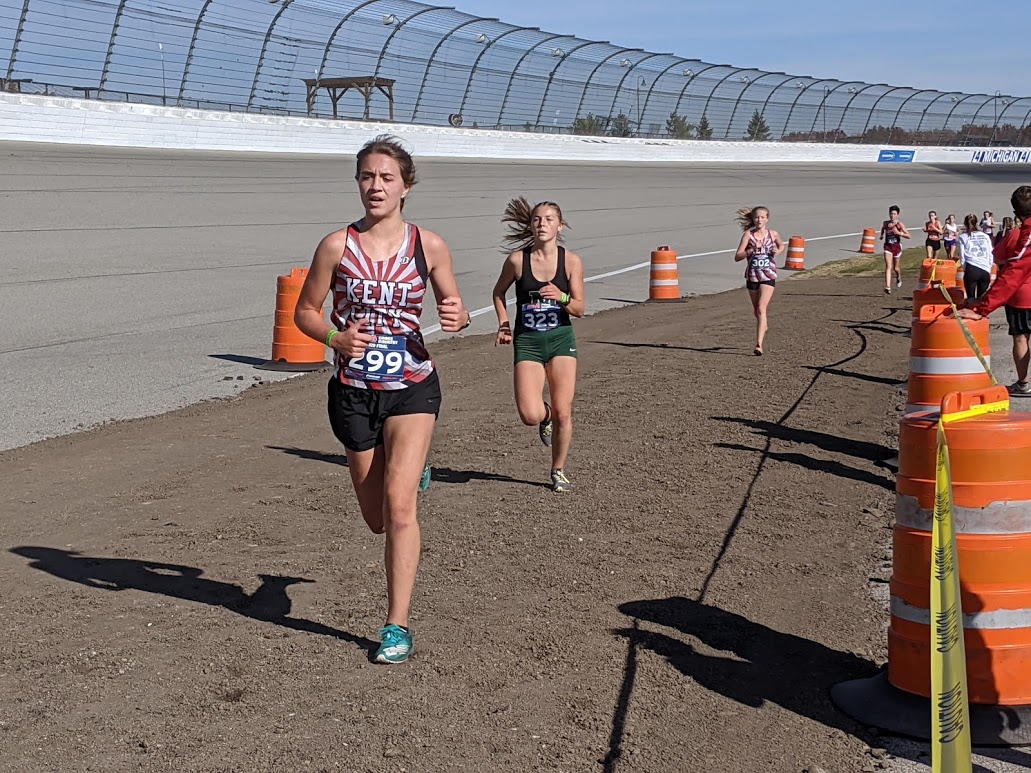 Then it was the waiting game, as the overall places were determined by the combined results of the two races.  The second race featured the top two teams from each region.  As girls finished the second race, the “live results” showed the Kent City finishers were bumped up to higher finish places.

Fortunately, Layla ended up  finishing in 11th place overall, her highest finish in her career.  Previously, she’d finished 54th as a freshman, then earned all-state medals in 18th and 16th the past two years respectively.  The dedicated and hard working CSAA Silver champion is now a 3-time all-stater! 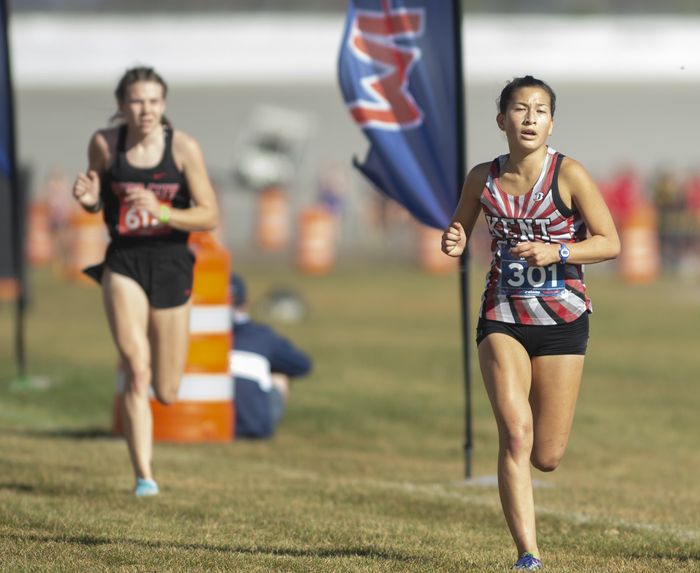 There were a few more nerve-wracking minutes waiting to see where Aly would finish; she ended up being bumped to 28th place, but that made the all-state cut (top 30)! She earned her first all-state medal after racing to 74th last season.  As a freshman, Aly was runner #8 and hadn’t even run at the state finals.  This is a wonderful ending to her season and is a real tribute to what the Kent City work ethic can do. 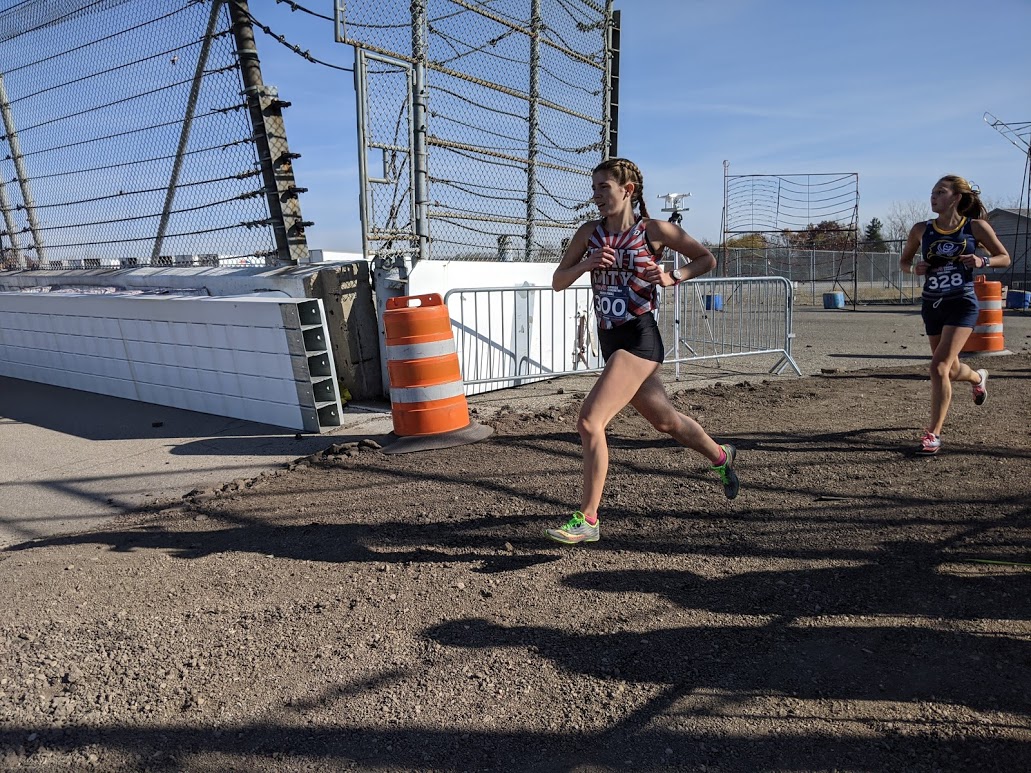 As a team, the Lady Eagles ended the day in 12th place overall, just two points out of 11th!  This was an improvement from their statistical ranking and was better than 2019’s 14th place!  With 146 division III teams in a crazy year, 12th place is a great place to be! 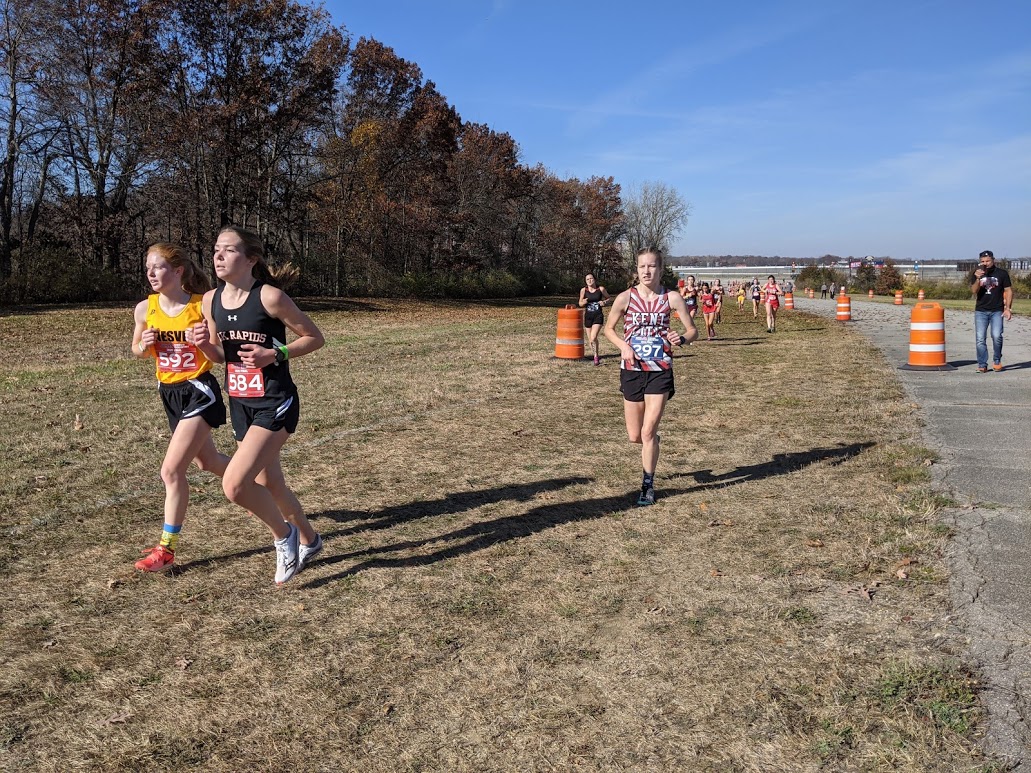 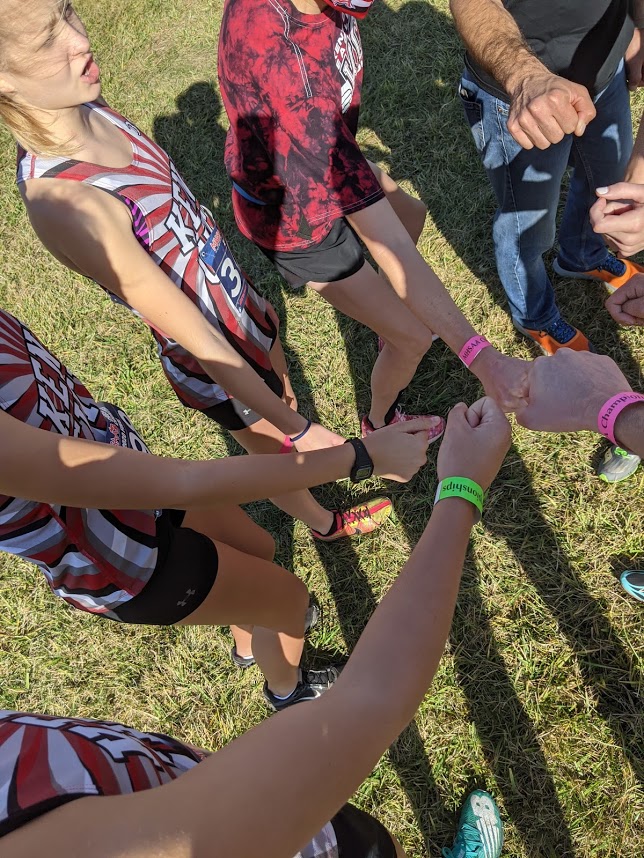 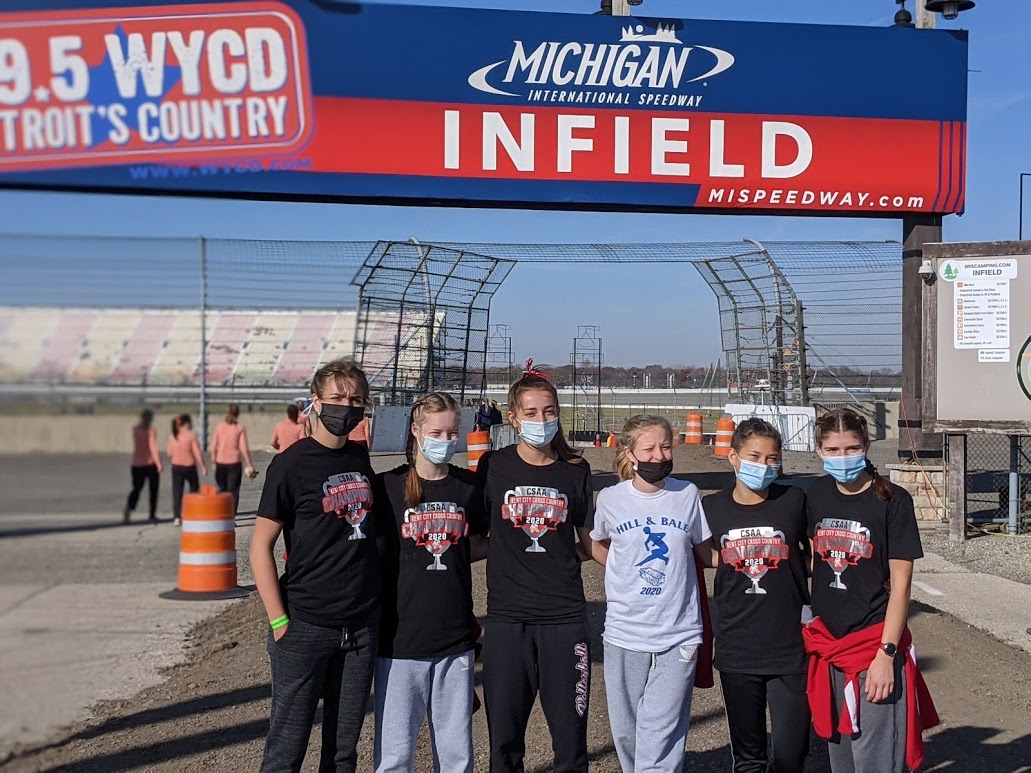 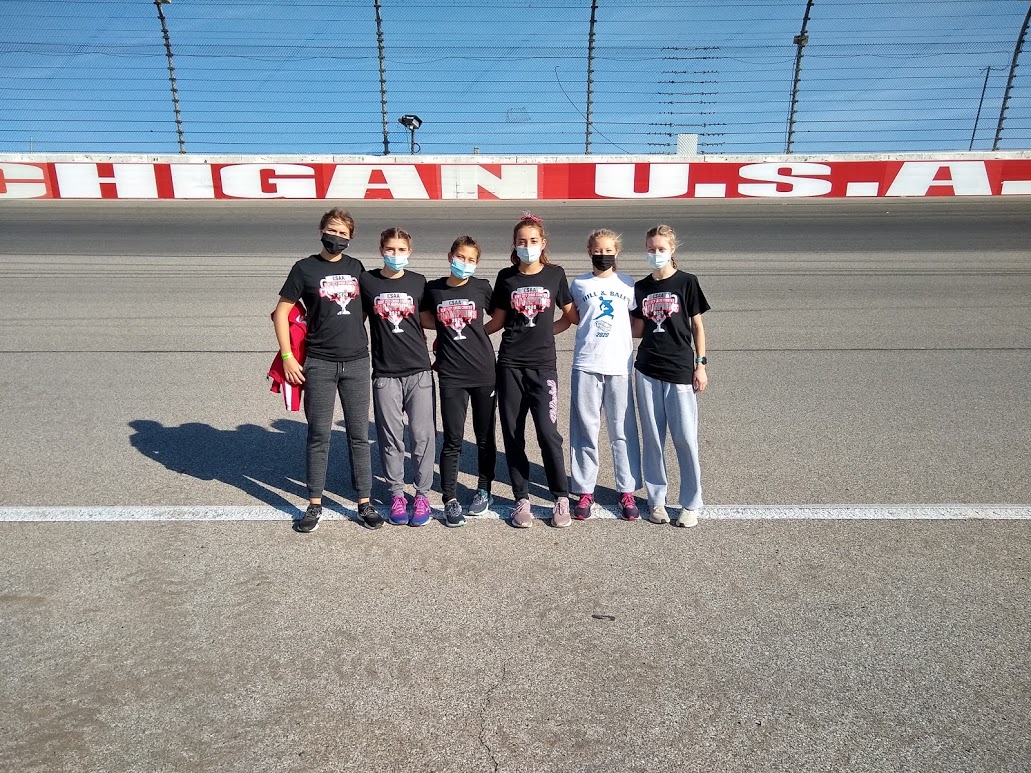 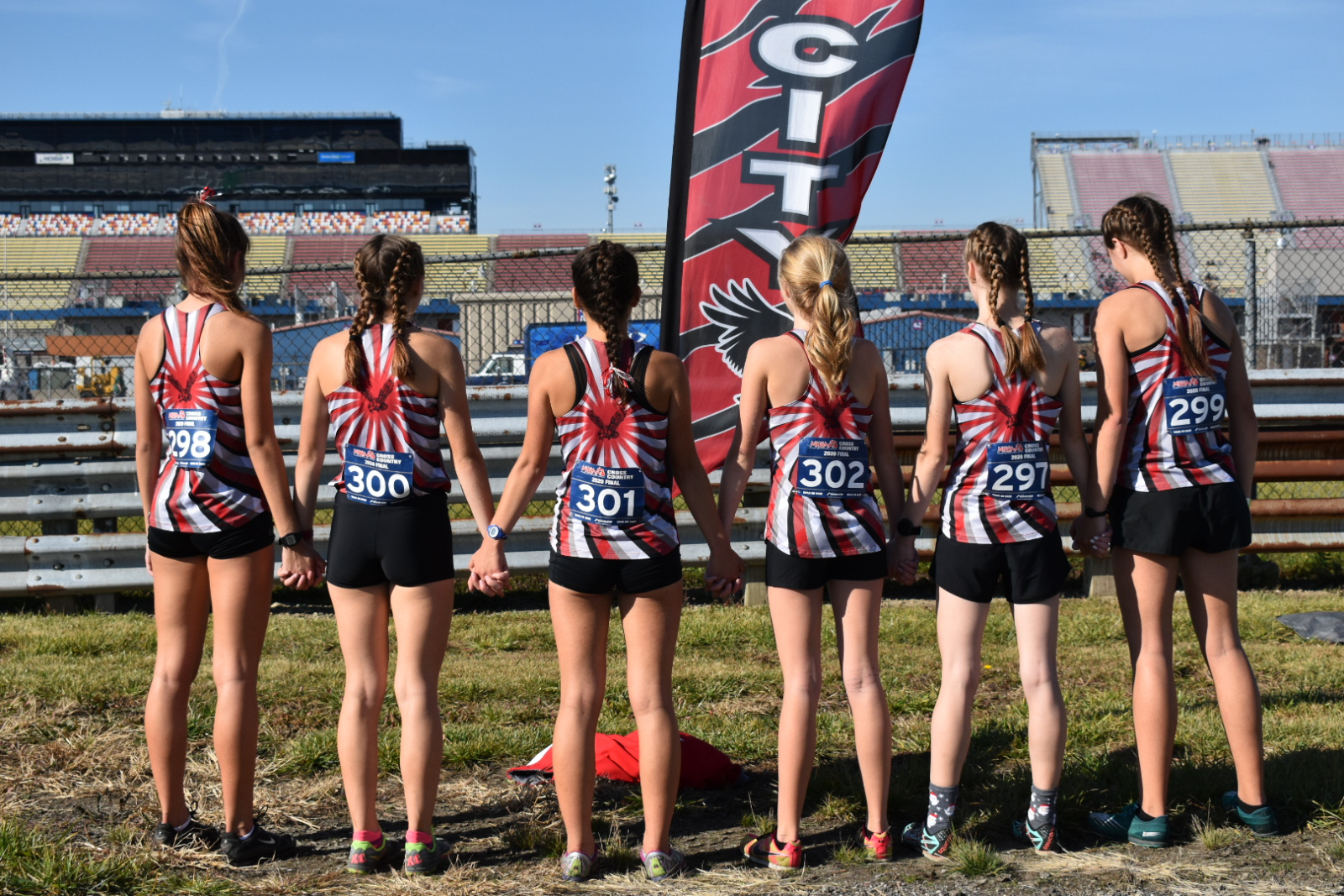