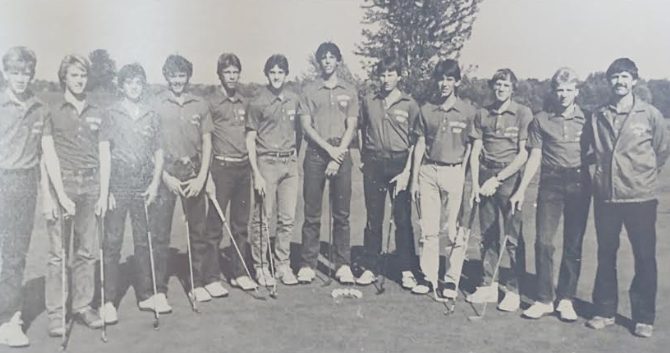 Eagle fans are no strangers to the teams from Pewamo-Westphalia.  The recent past has brought multiple match-ups with the Pirates in both football and basketball.  However, few may realize that the KC – PW rivalry dates back at least to the mid-’80s when the Eagles and Pirates both experiencing remarkable success in boys golf.

The Kent City golf team was noticeably on the rise in 1984 when the team earned a spot in the Class C LP State Finals held at Vassar-Golf & Country Club in late October.  The Eagles team carded a 346 total, good enough for ninth place.  The state champion that year?  None other than the team from Pewamo-Westphalia who finished 20 strokes better than the Eagles with a team total of 326.  One other notable story line was the absence of Troy Pelak from the line-up due to a broken leg.   With the Honorable Mention All-State (1985) and All State (1986) in the Eagles line-up, surely Kent City would had made a stronger run at Pewamo Westphalia.

Kent City (and Pelak) was back in the Class C LP State Finals in 1985 once again held at Vassar-Golf & Country Club.  The Eagles improved upon their ninth-place finish from the previous year and finished runner-up.  Once again, those pesky Pirates from PW bettered the Eagles 332 – 309 to win their second consecutive state title.  Eagle junior Joe Martinez took home the honor of low medalist at the Class C state finals in 1985 by shooting a 75 and defeating Joe Eccelton from Stockbridge in a sudden-death playoff.

In addition to their runner-up finish in Class C, the Eagles won 11 of their 12 matches including a 1st place finish at the Oceana Regional.   Troy Pelak finished 11th at the finals earning All-State Honorable Mention while Joe Martinez was the state’s best in Class C.   Martinez was voted Most Valuable Player, while Jeff Hall and Tom Chappell earned Most Improved Players.

The Class C LP State Finals in 1986 moved to Parma-Burr Oak Golf Course and once again saw the team from Kent City finish runner-up, this time bested only by Lansing Catholic-Central and by only one stroke 330 – 329!  On that day, senior Troy Pelak was named 1st Team All-State, while Joe Martinez earned an Honorable Mention nod.