It should not take Dolan Bair long to get acclimated to living on campus at Michigan State University in the fall as he has had four years of experience “living” at Kent City High School.  Take a look at his resume from just his senior year: varsity football, varsity soccer, marching band, varsity wrestling, student-government, National Honor Society, student lifeguard, quiz bowl, and varsity track and field (prior to COVID-19).  He was there in the morning to greet everyone as they arrived at school and the last one there at night to shut the place down.   For those wondering if all of these activities affected Dolan’s school work, well it did, he will be graduating with a perfect 4.0 GPA — a common theme among multi-sport, multi talented student-athletes. 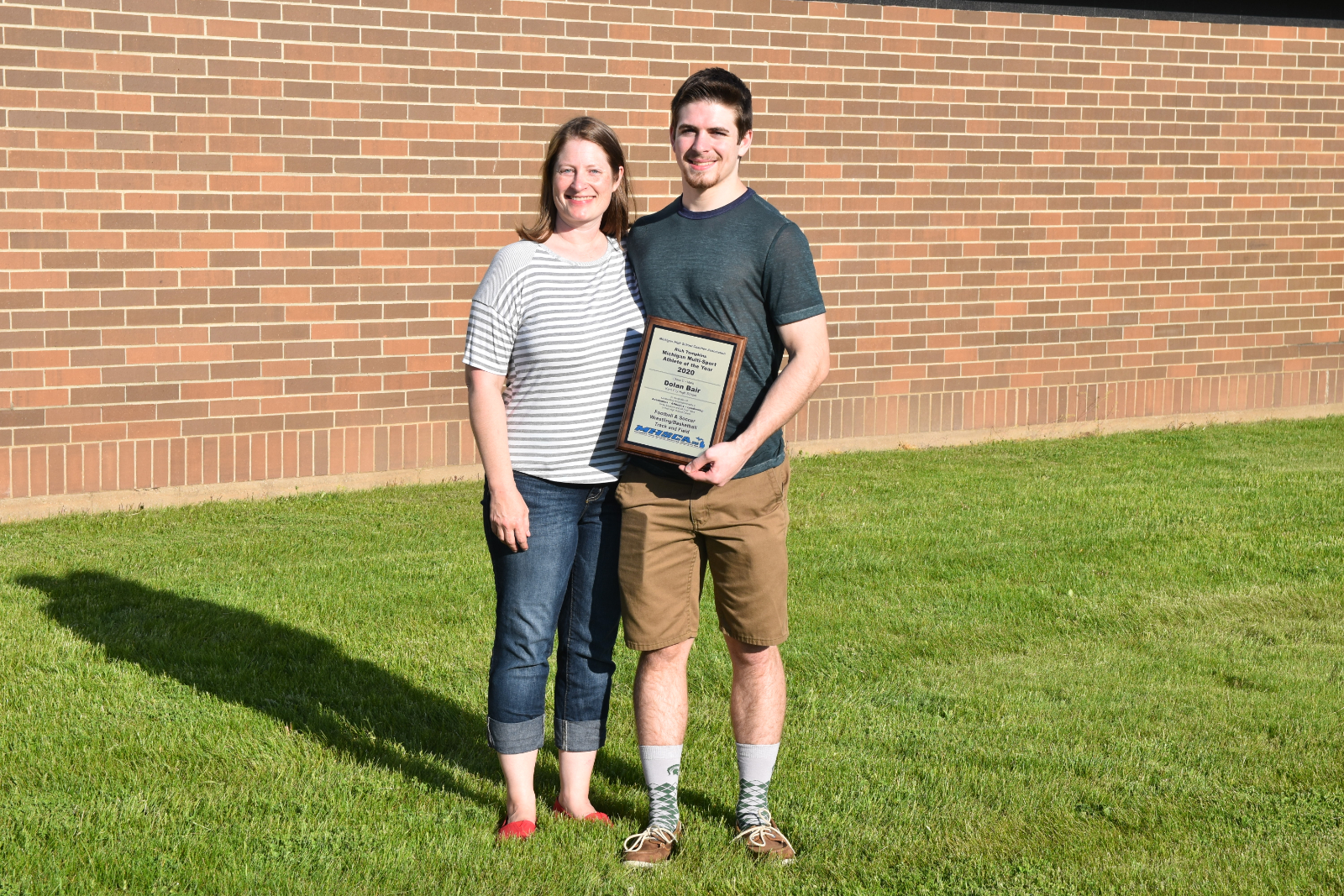 For his efforts, the senior is the recipient of the Rich Tompkins Multi-Sports for class C as chosen by the Michigan High School Coaches Association (MHSCA).  Each high school in Michigan can nominate one senior male and one senior female student athlete from their school who are evaluated on the basis of their athletic achievements (both individually and team), scholarship, leadership, and service.   From that pool of nominees, the MHSCA chooses a male and female from each class as the overall winners.   Started in 2015, after the passing of the former Executive Director of the MHSCA Rich Tompkins, Kent City has nominated two student-athletes each year.  Dolan becomes the second student-athlete in consecutive years to win the award, following Lauren Freeland from 2019.  Rich Tompkins grew up in Hart where he participated in multiple-sports and later coached multiple sports at Fremont High School, including much success in cross country and track and field.

Bair has been a part of a ton of success during his time at Kent City.   In athletics, his teams won seven conference titles (football, wrestling, and track and field), qualified for the playoffs twice (football), won two district championships (wrestling) and finished 4th and 5th in the state (track and field).  Outside of athletics, Bair was in the marching band that won the state championship last fall and finished in 3rd place during the previous three trips to Ford Field and he was a part of the Quiz Bowl team that qualified for the state meet and nationals the last three  seasons.  In athletics Bair earned all-conference honors on five separate occasions in three different sports.  He was all-state in track in field in 2019, and was looking forward to another successful spring in 2020. 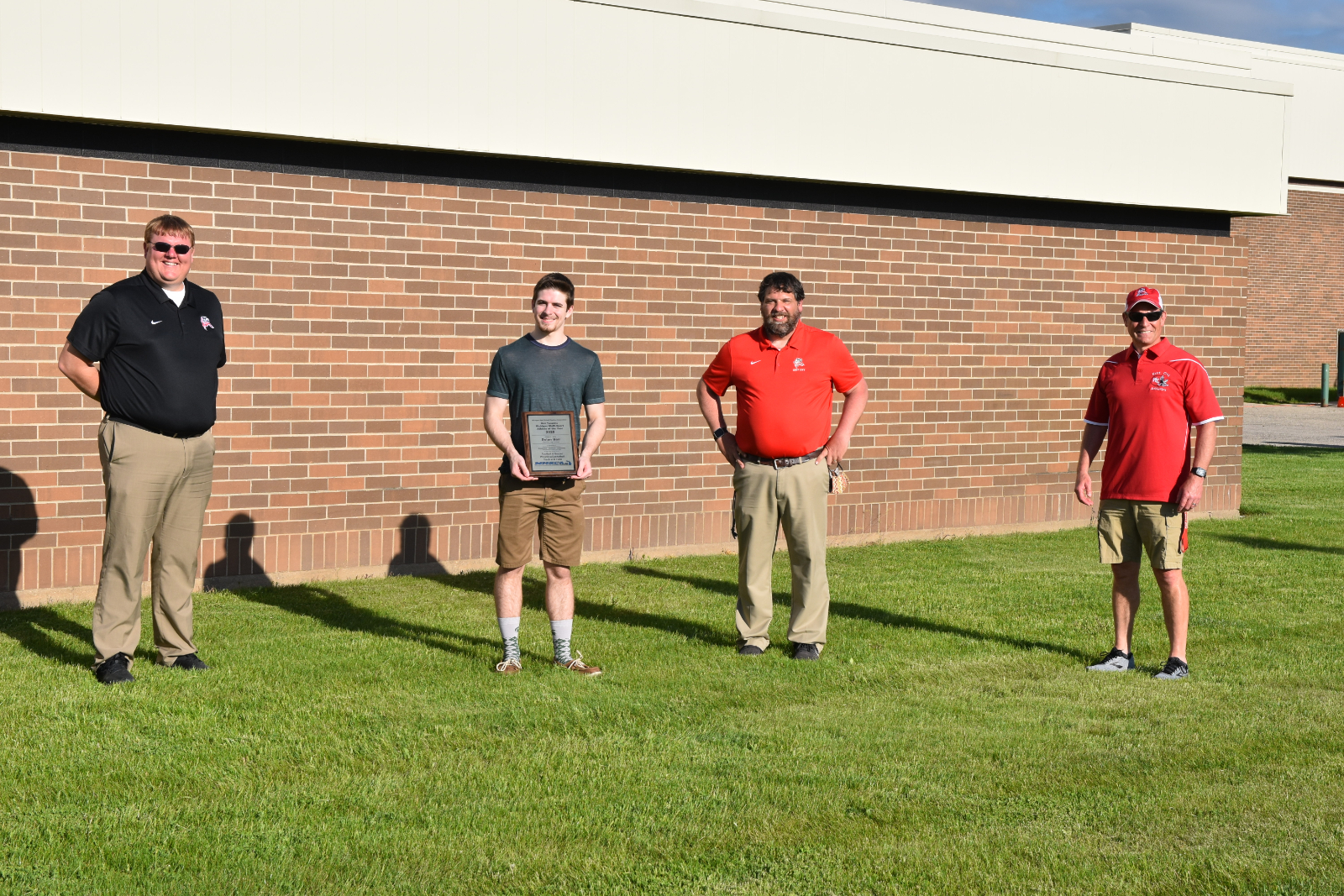 MLive/Muskegon Chronicle ran an article on Bair’s accomplishment earlier this month, to read these articles, use the following links:

Bair’s story is a lesson to future student-athletes at Kent City.  Our success hinges on student athletes like Dolan Bair, playing multi-sports throughout high school.  There are many benefits to this multi-sports mindset as opposed to sports specialization.   For one, many studies point to the increased potential for “over-use injuries” in students who focus on one sport year round.   Another drawback to single sport specialization is the higher chance of burn-out.   Student-athletes often will grow tired of a single sport when constantly working on that sport alone.   Finally, often times student-athletes think that by focusing on one sport, they have a higher chance of garnering a scholarship to play at the next level.   However, the chances of earning a scholarship to play sports in college are minimal and many collegiate coaches have gone on record saying they prefer to recruit multi-sport athletes.   In fact, in this year’s NFL draft (2020), 28 of the 32 first round selections were multi-sport athletes in high school, including 217 of the 255 (85%) overall.