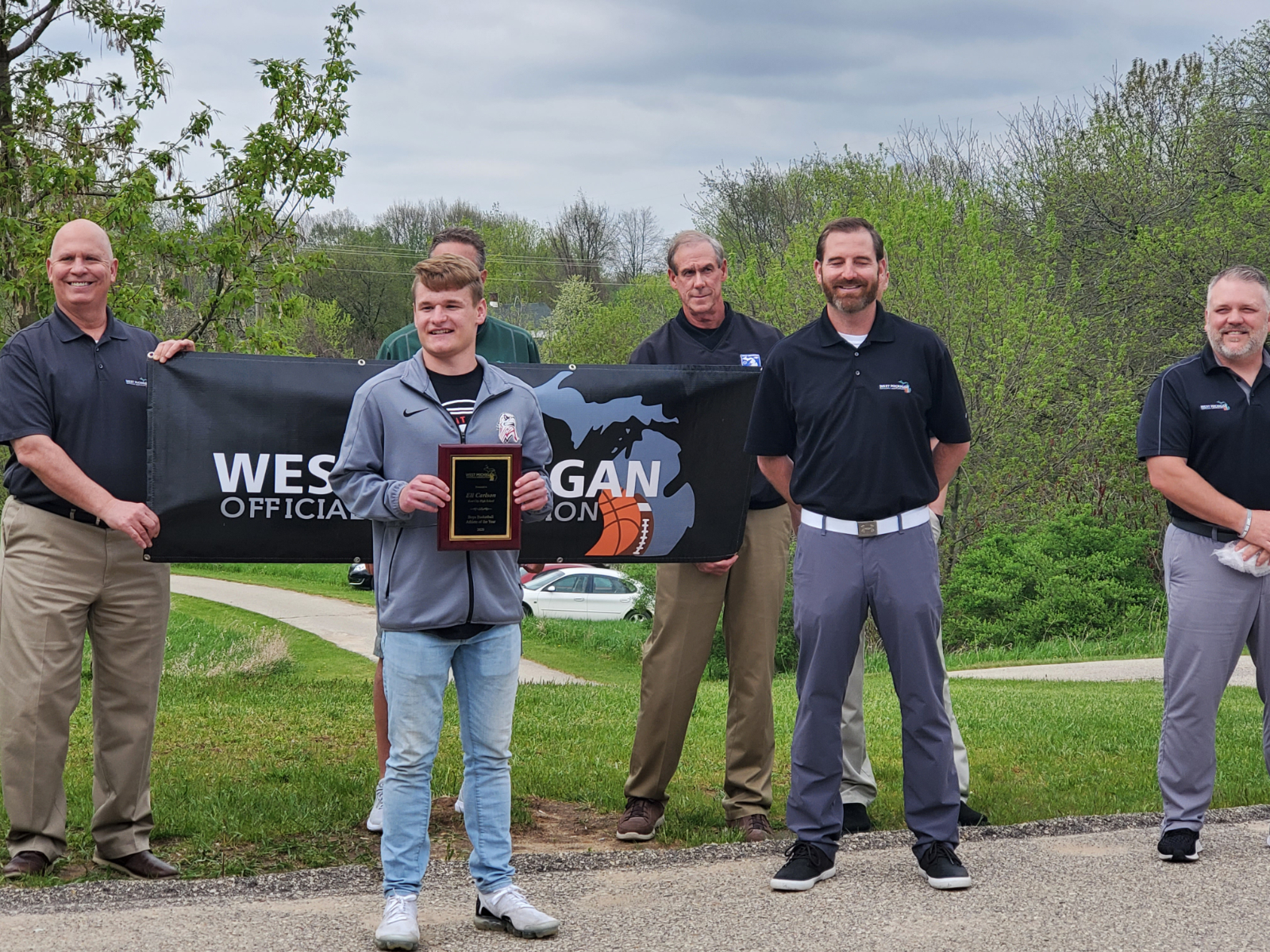 Carlson led the Eagles in scoring, averaging 20.8 points per game throughout the season, including a career high 43 points in a losing effort against Grand River Prep . . . just four points shy of the single game record held by Scott Carlson. A great shooter, Carlson shot 86.1% from the free throw line, leading the team with nearly twice as many attempts at the charity stripe with 101. Carlson was also second on the team in assists, averaging 3.2 per game.

On Tuesday, senior Eli Carlson became the first Kent City student-athlete to win the West Michigan Officials Association Boys Basketball Player of the Year Award.   Established in 1962 and given out to an area football player, the WMOA added an award for boys basketball in 1964.   During those 58 years, no one from Kent City has ever made the list (girls basketball was added in 1984).    For those familiar with the athletic scene in west Michigan, the past award winners is a who’s who in athletics in the greater Grand Rapids area: West Michigan Officials Association Student Athletes.   Joining Carlson in this year’s class of honorees were Allendale’s Owen Burk (Football) and Covenant Christian’s Abby Kaptein (Girls Basketball).  Along with the plaque and prestige associated with each honoree, the WMOA also sponsors a generous scholarship for each student-athlete.

Under normal circumstances, the WMOA hosts a banquet where each award winner and his/her family can attend along with members of the association.   This year, the WMOA held out as long as they could, but then decided to make house calls to deliver the plaque with a few of their members.   Fox 17’s Jason Hutton was at Carlson’s house to capture the presentation.  To watch Fox 17’s coverage of the award presentation, use the following link:

The name Carlson and basketball, go together like peanut butter and jelly at Kent City.   The latest in this historically talented family of basketball players (not sure how they are exactly all related) left his own mark in Kent City’s record books, leading the Eagles to 59 wins in his four seasons on the varsity squad.   Carlson moved up to the varsity team mid-way through his freshman year and made an immediate impact on the program for four seasons.   In 2017-2018, Carlson and the Eagles became the first Kent City team to finish the regular season 20-0, winning the CSAA Silver championship.   During his junior and senior seasons, Kent City finished in second place, trailing conference arch-nemesis Morley Stanwood in both instances.  This past season, Carlson led the Eagles past 21-0 squad from the town to our west in the District semi-finals, but COVID-19 put a stop to the season.

Individually, Carlson surpassed 1,000 points in his career in a game against Sparta in late January, he ended with 1,199 points, just 63 points shy of Scott Carlson.   Carlson led the Eagles in scoring, averaging 20.8 points per game throughout the season, including a career high 43 points in a losing effort against Grand River Prep . . . just four points shy of the single game record held by, you guessed it . . . Scott Carlson. A great shooter, Carlson shot 86.1% from the free throw line, leading the team with nearly twice as many attempts at the charity stripe with 101. Carlson was also second on the team in assists, averaging 3.2 per game.

The award is not based solely on achievement on the court, but also in the classroom and sportsmanship.   Carlson excelled in these areas as well carrying a 3.86 GPA in the classroom and seemingly always wearing a smile on his face regardless of the obstacle he was faced with.  In addition to basketball, Carlson also played quarterback on the varsity football team as a senior, helping Kent City advance to the District finals before succumbing to the eventual State champions.   On the diamond, Carlson was an all-conference performer as a pitcher and shortstop. 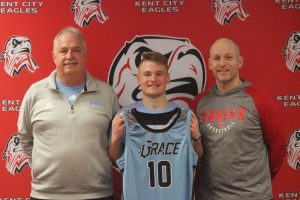 Next year, Carslon will attend Grace Christian University where he will play basketball for the Tigers.   On Friday, March 6, 2020, Carlson joined by family and friends, made that decision official, signing his letter of intent.    Carlson plans on pursuing a degree in Business Management with an emphasis on Sports Management.   To read an article from Grace Christian University regarding Carlson’s signing, use the following link: