The latest poll from the Muskegon Chronicle/MLive include two more Kent City spring sports stars who are really feeling the pain from the cancellation of the 2020 track and field season.   Junior Layla Martini and senior Nick Flegel were set to be the team leaders for the varsity girls and boys track and field teams as they pursued their sixth (girls) and third (boys) consecutive CSAA Silver championships.   If they look familiar from their pictures, you’ve probably seen them before training in and around Kent City/Casnovia — both Flegel and Martini log a lot of miles throughout the year.  One thing is for sure, both runners would have added to an already successful running career at Kent City this spring. 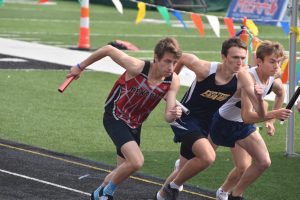 Nick Flegel
In track and field, Flegel has been a star for the Eagles beginning in his freshman year, when he earned 1st team all conference as a member of the 4×800 meter relay team. Then as a sophomore, Flegel again was 1st team all-conference as well as All-State as a member of the 4×800 meter relay team who finished in 8th place at the MHSAA State Finals.  Last year, Flegel finished in 2nd place in the 1600 meter run and 2nd place in the 3200 meter run at the conference meet, in addition to yet another 1st place finish the 4×800 meter relay and a 10th place finish at the MHSAA State Finals. Flegel set the bar high for his senior year in the waning moments of the 2019 track and field season, establishing three personal records in the 800 meter run (2:06.27), the 1600 meter run (4:38.43), and the 3200 meter run (10:15.97). In the fall, Flegel has earned 1st team all-conference in the previous two seasons and honorable mention all-conference his sophomore year. The team won the CSAA Silver championship in XC every year Flegel was on the team, qualifying for the State Finals in two of the four seasons (sophomore and junior seasons). This did not stop Flegel from returning as a senior though, as he qualified individually to race at M.I.S.

To vote for Nick Flegel, use the following link:
Who would have been the top Muskegon-area long-distance male runner in 2020 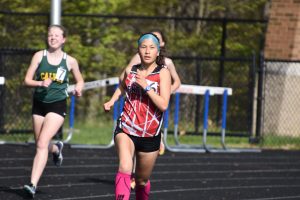 Layla Martini
Like Flegel, Martini earned All-State in track and field as a sophomore in her second appearance at the MHSAA State Finals. Her seventh place finish was five spots better than her finish during her freshman year. In both of those seasons, Martini earned 1st team all-conference, bringing home gold medals in the 4×800 meter relay and the 3200 meter run each season. Martini has also earned All-State two times in cross country with one more chance as a senior in 2020. Last year, Martini finished in 16th place, two spots higher than her 18th place finish during her sophomore season. As a freshman, Martini crossed the finish line at Michigan International Speedway in 54th place. One thing is a constant for Martini, improvement. The junior continues to see her times drop and places improve, despite being 1st Team All-Conference five times and All-State three times. Even more remarkable, Martini’s teams have won five CSAA Silver championships and qualified for State Finals as a team four times (three times in XC and one time in Track and Field).

To vote for Layla Martini, use the following link:
Which distance runner would have dominated Muskegon-area girls track?