The end of the spring sports season is a whirlwind to say the least.  It seems that following Memorial Day, everyone’s focus is turned to Michigan’s summer and accomplishments by those in spring sports do not receive the fan-fare that they deserve.   The 2019 MHSAA Track and Field State Finals at Jenison High School is one such event.   A day marked by powerful thunderstorms and delays saw Kent City grab three state titles.   It was the final performance for two of the most explosive student-athletes Kent City has ever seen as well as a glimpse of the bright future ahead. 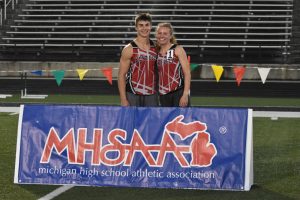 Senior Giovanni Weeks came home as a state champion in the 200 meter dash and the long jump and finished in 2nd place in the 100 meter dash and was a part of the 5th place 400 meter relay team that also included Will Wright, Jayden Williams, and Dolan Bair.   Senior Lauren Freeland took a longer route to finals stardom, finishing in 3rd place in the 1600 meter run and 2nd place in the 800 meter run.   With only one race remaining in the meet and her career, Freeland joined two freshmen — Kylie Brown and Taryn Preston — along with one sophomore — Carley Denhof to pull off the unthinkable.

There are a few moments in life when a big dream you worked for, mapped out in your mind, and put yourself in position for, comes true. This is not what happened on June 1, 2019, at Jenison High School Fieldhouse for the Division 3 Track and Field State Championships. 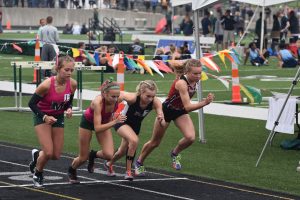 After two rain delays, I was finally on the track ready to win the 1600m run. The gun went off and I shot to the front. I led almost the whole race, and then absolutely died the last 200m and finished in third. I still ran a personal best, so I couldn’t really be upset, but after everything that had been going on then and the past three years, I really thought that the 1600m State Champ title ought to be mine. I was exhausted and crushed by the realization it was not. I gave it another go in the 800m run shortly after, and took the runner-up medal. Another good effort, but I knew if I was going to win anything, it should have been in the 1600m – and that was over. 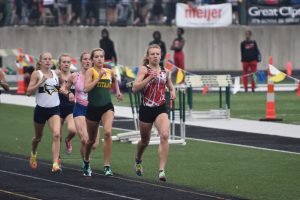 My 1600m relay team and I started to warm up for the last event of the night, and the last of my high school career, but we were soon stopped by lightning. After my dad’s close encounter with a bolt, and a long wait in the Jenison gym, we were finally cleared to go back out and warm-up, at about 10 pm.

A lot of thoughts were pounding in my head after those earlier races. I thought about how I should be so thankful I was even able to race because I was injured the whole past season, and did most of my training off of my feet. I also witnessed my future college roommate have to scratch herself out of all State Final competition because of injury. I felt guilty for being upset about a second and third place finish.

But I also thought about how long I had dreamed about being a State Champion. Years of hoping for this opportunity and plenty of work along with it, too. I was mad at myself for not racing smarter and just making it happen. I could remember my freshman state finals trip like it was yesterday: coming into the 400m dash ranked first, and falling within the last 50m of the race. The conflict in my head would have to cease fire, though, because it was almost time to take the track.

I was wearing a huge purple rain poncho, and declined to do too much warm-up before the race because my legs were pretty tired. I was stretching in the middle of the football field and looked around me: the stadium had cleared out, athletes were running around laughing and actually enjoying themselves, the big lights were all on illuminating the track in the darkness, and rain was slowly falling from up above. There was some sort of electricity in the air, and I tried to soak in every last second of that moment, because I was almost done with highschool sports for good. 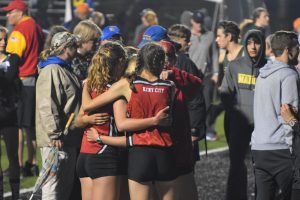 Coach Evers huddled us 1600m relay girls together and gave us a pep talk. She meant it, but a lot of it was us laughing and making fun of eachother, too. I have never had so much fun before a race, and wasn’t very nervous at the time either.

“I think you guys can do it, you know,” Evers said to us.

“Do what?” I replied jokingly.

“Win. You guys have a legitimate shot. And you should, like, make a bet or something for me to shave my head if you do.”

We all laughed and began shouting out other ideas for her hair, but I didn’t believe a word she said in that moment. We were ranked seventh, and had lost to Mason County Central a few weeks earlier by a great deal when we were racing together at our best. I shook off the thought of all that pressure and reminded myself to be happy in the last few minutes of my high school career. I turned around to start walking to the start line when Evers grabbed my arm.

“Sic ‘em,” she said to me and smiled. I don’t think either of us will ever forget that one second, two word, moment in time. 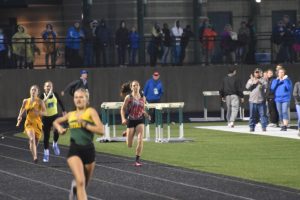 We took the track with seven other teams and that’s when the nerves started to kick in. Taryn Preston started our relay for us, and there wasn’t anyone I could’ve trusted more to put us in position from the beginning. She’s a girl who is very athletic, but so dependably strong, and strong-willed, too. She took off with the gun and handled any nerves with ease. She rounded the second turn right in the middle of all the action and handed off the baton to Kylie Brown.

I didn’t know Kylie very well until my senior track season, but I saw so much growth in this freshman within one season, and am so proud of her. She broke out of her shell and pushed herself further than what most people thought she might be capable of. She took the baton from Taryn and flew. My heart started pounding when I saw her come around the last turn – in first place. It then dawned on me that Evers was right (again), and that we had a real shot at this. I was going to have to give whatever I had left because I did not want to let these girls down. 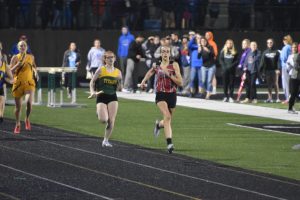 Kylie handed the baton to Carley Denhof, and I shed the rest of my sweats and started to walk onto the track. Evers put Carley in the third leg of the relay because she knew what Carley was capable of, even if Carley didn’t. She’s faster than she knows, but she’s also such a team player and that mentality is what has to carry a person through that third leg. It isn’t always glamorous, but it is more important than people give it credit to be. 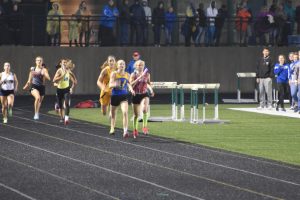 Carley had barely slipped into second place, and she was storming in towards me. Mason County Central exchanged a few meters ahead of us, and Pewamo-Westphalia exchanged right on my hip. A lot of the next minute was a blur, but after watching tape back of the race, the three of us girls were all evenly spaced behind one-another for a good quarter of the final lap, until it was just me trailing Mason County. I locked in on the back of a blue jersey, and really made no ground on her for most of my leg. 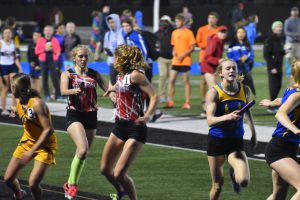 In a lot of my races, I zone in and any other thought or distraction is not part of the race at all. For the most part, this was no exception. I was just running, and truthfully, I don’t really remember much until I started to round the final turn and could see the finish line. This is a moment in my life where I had complete clarity for a split second, and a single thought that I know I won’t forget.

“You could be a state champ, damn it.”

Excuse the language inside my head, but that was my exact thought in that singular moment, and as quickly as it came, it left. I stopped thinking about anything at all, and flipped a switch. I changed gears and left every piece of me on the track that night. This was it, all I had left – of energy, of highschool track, and of chances to fulfill a dream of being a state champ. I kicked it in, but I wasn’t sure if I had enough track left in front of me to make it happen. Watching the video back, it took me six seconds from when I really decided to go, to be stride for stride with the Mason County girl. I could feel her next to me, but in that moment I knew I had her. Five more seconds, and I crossed that finish line only about a stride or two in front of her. I remember letting out a loud cry as I leaned and crossed the finish line, and soon after buckled over to catch my breath. 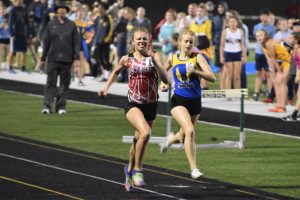 Then it hit me like a wave – I had done it. The realization set in and I instantly started crying. Disbelief, exhaustion, excitement, gratitude, and confusion all mixed together as I found myself back on the infield. Evers picked me up and shook me and it was one of the best hugs I can remember. She showed me her stopwatch and we had all run faster splits than ever before. We broke the school record by five seconds. We did it. The girls, Evers, we all did it. 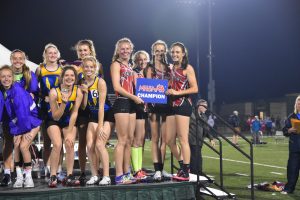 I think I cried for the next hour, but that is really beside the point, and Evers likes to give me crap about it all the time. The truth of it is that yes, there are a few moments in life when a big dream you worked for comes true. But, I think it’s the moments that we never saw coming that mean more to us than the ones we scheme over could ever. Most of life is out of our own control, and if you get discouraged by the plan of man failing, you might miss the unforeseen blessings God graces us with. I wouldn’t change a thing about how my senior year ended, and the person it shaped me into. And although highschool is over, I learned to take the disappointments in one hand and to hold onto hope in the other with everything that comes at me in life, because we can all learn a lot from both.