After setting a school record for wins in 2016 and winning the program’s first home playoff game against Montague, it seemed fitting that the Eagles would open the 2017 season on a stage like Lubber’s Stadium on the campus of Grand Valley State University against their neighbors to the west. To add to the significance, Kent City had lost twice to the Bulldogs in 2016, once in the season opener and again in the District finals amid a scheduling conflict that saw several key players unavailable at game time for the Eagles. 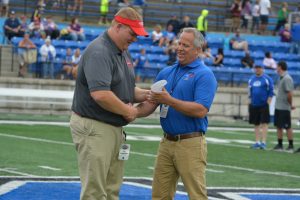 Coach Bill Crane reminisced about the milestone win, his choice for our Great Games feature. The 2017 season opener was the first step in setting a new school record for wins (10 wins) and recording the school’s first ever undefeated and tie-less regular season. “We beat Ravenna to start the season 1-0,” Crane said. “It was even better because we had lost them in the District finals the year before to end our season.” Heading into the game, Coach Crane and his staff thought defense would play a big role in capturing the victory, “We wanted to put them in a position where they had to throw the football. We thought they would struggle with a first year quarterback so we put a premium on stopping their rushing attack.” 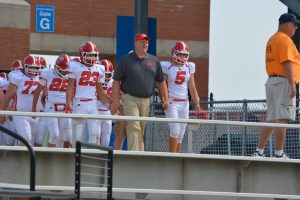 Even before the game, the uniqueness of playing in a college stadium and in a showcase game added some new hurdles for the coaches.  “When we arrived at GVSU we really didn’t know what to expect in terms of locker rooms or the warm-up situation. They (GVSU) were great hosts and took care of us, but we had to warm up on the practice field. From where we were it was difficult to see the clock in the stadium (East Kentwood vs. Macomb L’anse Creuse North). When I realized that we were running out of time I shortened our warm-up to get us on the field. The kids didn’t think anything of it and played their tails off. We opened up with 4th down stop against Ravenna’s offense and scored on the first offensive play for us.” 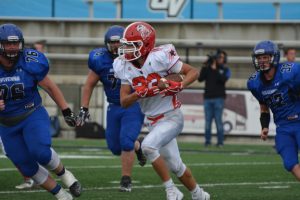 Kent City had a lot of great performances on the day, offensively, Giovanni Weeks (junior) scored three of Kent City’s touchdowns and set up a third with a great catch.   Defensively, Jace Dailey and Luke Chipman were all over the field.   Right before half, Kent City regained momentum, taking a 21-14 lead as time was running out.   “It was a close ball game as we were finishing the second quarter. We were driving the football, but running out of time. We ran a rap draw for 25 yards by Evan Jones to score with less than 10 seconds to go in the first half and take the lead. The momentum was ours heading into halftime and we never look back,” Crane said.

“It will always be a game that we talked about,” Crane added.  “Playing at Grand Valley State University against a team that knocked us out of the playoffs the year before. It was a jump-start we needed that season. It was the first of our 10 game winning streak that is still they record today for Kent City football.”  The following is the article that was posted after the game: 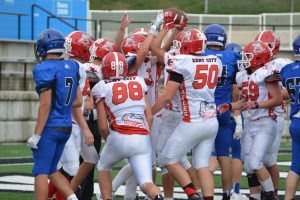 It could not have been a better atmosphere on Saturday at Grand Valley State’s Lubber’s Stadium where Kent City opened up their 2017 season in the Grid-Iron Classic.  The visitor stand was a sea of scarlet and white, the marching eagles were rocking, and the scoreboard read in favor of the Eagles.  Kent City was able to take care of some unfinished business when the game kicked off at 4:30 p.m.

Kent City’s defense took the field for four plays before stuffing the Bulldogs on a 4th short to give the Eagles the ball and a short field to work with.   The offense capitalized on the 1st play as junior running back Gio Weeks raced 31 yards for the Eagle score.  Kent City held the 7-0 lead early in the contest.   Four plays later, the Eagle defense once again gave the offense the ball, this time via a Jace Dailey hit on the running back that jarred the ball loose and Evan Jones was on the spot to recover the Bulldog fumble. Kent City’s offense would start with the football on their own 38 yard line  and use seven plays before Cody Bowers would take it in for the Kent City score — Eagles 14 — Bulldogs 0.

The opposition would not be denied though, as they put together an eight play 64 yard drive that cut the score to 14-7.  On the next series, Kent City turned the ball over via an interception followed by two three and outs by both teams.   However, field position had been flipped in favor of our neighbors to the west and they capitalized on the 31 yard field to tie the score 14-14.

With time winding down in the 1st half, Kent City needed an answer and they found one in junior running back Evan Jones.  On a 4th down play with less than 20 seconds remaining in the first half, junior Evan Jones raced 24 yards for the go ahead score.   The successful extra point put Kent City on top for good with a 21-14 half-time advantage.

The 3rd quarter was one Kent City would like to forget.  Kent City received the kickoff for the 2nd half, but were unable to get anything going offensively — going three and out.     The Bulldog’s 1st possession stalled, but they gained favorable field position after a Kent City fumble on their own 41 yard line.  They pounded the football 7 times for the 41 yards and a chance to tie the game.   On the extra point, the holder fumbled the ball and Gio Weeks was able to stop him in the backfield to keep the Kent City lead intact at 21-20.

In the 4th quarter it was all Kent City as the Eagles scored 20 unanswered points.  The first score was set up by 31 yard John Meek pass to Gio Weeks on a 4th and 8.   Senior, Luke Chipman finished the drive with a 2 yard run making the score 28-20.  The Kent City defense scored yet another turnover thanks to Gio Weeks strip of the Bulldog wide receiver.   Gio Weeks would strike again three plays later, this time on a 51 yard run that included several broken tackles.  The final score came after the Eagle defense forced a Ravenna punt on 4th and long.  Gio Weeks would score for his third and final time, this one coming from 45 yards out, making the final score Eagles 41 Bulldogs 20.

Following the game, both schools lined up across from each other at mid-field for the trophy presentation which was reminiscent of the final game for the Eagles of 2016 — only this time, Kent City’s Head Coach Bill Crane accepted the trophy for winning the 2017 Grid-Iron Classic.   Kent City is 1-0 on the season and will host Comstock on Thursday, August 31 at Ward Memorial Field for Parents’ Night.   Kickoff is set for 7:00 p.m.