The adrenaline is still high from Friday — two days later. Case and point — Friday when the trophy ceremony was done in Lansing at Royal Scot Bowling Center, I texted Bill Crane to let him know I was on my way to Kent City at 6:59 p.m. I rolled into the Kent City Parking Lot at 8:11 p.m. Mapquest says 1 hour and 21 minutes. Now I am a law abiding citizen to the extreme, in fact, many who ride with me wonder if I have ever been pulled over for going too slow. Officer Cook stop reading here . . . I broke the speed limit the entire way to the Nest trying to decide if I should just run out onto the floor with trophy hoisted above my head as soon as I got to the gym. I would have been there about five minutes earlier, but I am not real good at parking my truck when parking lots are full — people who have ridden with me will tell you that as well. I thought better of it with two minutes remaining in the game.

What our girls did on Friday was nothing short of amazing, no one in Lansing saw it coming (except Jason Brake). At one point we commiserated at the location of the event, wishing we were closer to Kent City so we could call everyone and tell them to get here and quick! Our girls went toe to toe with the best teams in the state with what could be a junior varsity team in other sports (one junior, one sophomore, and four freshman) and finally fell to the defending state champions with a strong history in bowling. You can say what you want about bowling, but if you have never been to a tournament of this caliber, you haven’t seen anything. It is a combination of mental toughness and precision, with the added variable of oil patterns and crowds of fans yelling for their teams. During the qualifying rounds (which last anywhere between 4 and 5 hours) the bowlers just do their best, not knowing for sure where they are at in the grand scheme of things. Kent City’s team was still upstairs eating their sack lunches when the finalists were announced — the Eagles were 8th and the final team to make the cut. I think we (parents and fans) were happy we had made the top eight, but if we were happy with that, we were going to be elated with how the day would end.

In the tournament play, you do know where you stand which adds another variable to the whole mental toughness category. Against the first place seed and the number one ranked team in the state in the first round, Kent City jumped on the Orioles in the first Baker game surprising Quincy.  Following the initial setback, Quincy had a stranglehold on the game until about the 5th frame when something strange began surfacing. Kent City did not let the deficit get to them and began climbing back while the Orioles fell apart. The Eagles had secured the upset before our final bowler even made her way to the approach and the celebration had begun — by the Kent City fans, not the bowlers — they were ready for the final four. An identical scenario played out in the next match against Traverse City Christian, but this time, Kent City won the first Baker by a large enough margin to pull them through at the end of the Peterson game. It could not have happened to a better group of kids either. I have heard that if you step foot in Sparta Lanes on any given day, you will find all of our bowlers, boys and girls whether there is a scheduled practice or not. On top of that, they work so well together, cheering for each other whether they throw a strike or a gutter ball. So Mia Schwartz, Peytin Brake, Abby Pecynski, Lauren Witt, Carrissa McCullough, and Madi Brake you should be extremely proud of what you have accomplished this year — everyone in Kent City is!

Our second trophy of the day on Friday went to the varsity girls basketball team for their third consecutive District championship after defeating conference arch-nemesis Morley Stanwwod, 53-47. Kenzie Bowers led Kent City with 19 points and became the school’s all-time leading scorer passing Kristi Boehm. Jenna Harrison chipped in 13 points while freshman Lexie Bowers added 12 points. The Eagles also defeated Hesperia on Wednesday for the third time this season, 61-26 and on Monday, Kent City destroyed our neighbors to the West 86-25. Kent City led in that game 40-2 after the 1st quarter alone! Kent City is now 22-1 on the season.

Kent City’s Jayden Williams earned all-state in wrestling this past weekend, finishing in 3rd place at Ford Field in the 119 lb. weight class. Williams won his first match, but then fell in the second round. He won his final match on Friday by pin, ensuring a podium finish on Saturday. Williams ended his career at Kent City winning all the rest of his matches, including revenge over his earlier loss in the consolation finals. Williams compiled a 46-4 record throughout his senior campaign.  Freshman Zane Kik went one and two at the finals, losing his first match and then rebounding for a win before he bowed out of the tournament in the blood rounds.

The varsity boys basketball team went 2-0 in the final week of their regular season defeating Orchard View and Newaygo.   On Tuesday, Kent City celebrated senior night with a big win against a solid Cardinal team, 61-54.   Three seniors led the way for Kent City with Eli Carlson scoring 20 points, Max Hudson adding 16 points and Will Wright netting 14 points.   Then on Thursday, Kent City traveled to Newaygo and defeated the host Lions 49-36.   Max Hudson led the scoring with 18 points.   Kent City ends the regular season with a 12-8 record. 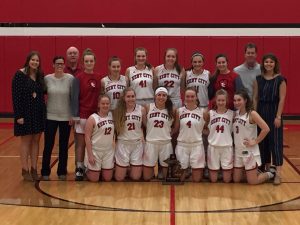 Varsity Girls Basketball @ MHSAA Regionals (@ Morley Stanwood)
Tuesday, March 10 @ 5:30 p.m. & Thursday, March 12 @ 6:30 p.m.
I am often asked about girls basketball and more times than not, post-season match-ups quickly become one of the topics of conversation. I would like to put this to rest for the final time this year, Thursday’s match-up with Ithaca will be tough, but I am confident we can beat the Yellow Jackets — and besides, they have to get by a solid West Michigan Christian team in the Regional semifinal first. Ithaca has suffered two losses this season, both to Division III power Hemlock, who also won Tri-Valley Conference West. One common opponent adorns our schedules: Lakeview. Kent City easily handled the Wildcats in both meetings (81-28 and 67-2), the Yellow Jackets did the same in the District Semi-Finals by a final score of 48-5. Kent City’s Regional has all of the number 1 seeds from their respective Districts, which is how it was supposed to work. All records and rankings are unimportant at this point in the season, 32 teams remain and it will come down to who can do what they do the best. It never hurts to play in a familiar gym either which is another advantage for the Eagles. Just a reminder that all tickets will be $6.00 for Regional action and pay close attention to the start times this week. 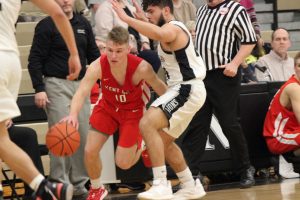 Varsity Boys Basketball @ MHSAA Districts (@ Ravenna)
Wednesday, March 11 @ 5:30 p.m. & Friday, March 13 @ 6:00 p.m.
Kent City’s boys will start their post-season on Wednesday against the host school or North Muskegon.   The last time these two met (North Muskegon and our neighbors to the west), North Muskegon lost by a mere two points (52-54). Our neighbors to the west have had a great season, finishing 20-0 and winning the West Michigan Conference. This will be the third match-up this year between the two schools. Regardless of who comes out on top on Monday night, this is a solid District once again with Holton (13-7) and West Michigan Christian (15-5) playing in the nightcap on opening night. Kent City ended up as the third seed, which means they were placed based on the alphabet. Since Holton comes before Kent City in the alphabet, Kent City got the first round bye and will have a chance to prepare for their first round opponent. The only team with a losing record in the District . . . White Cloud (7-13). Could it be an all CSAA Silver final? It is possible and Kent City would relish an opportunity to get another crack at the Red Devils. Regardless of who the Eagles play this week, they will have a return trip to the Nest in mind as the District winner will be back in the Nest on Monday, March 16 for Regional action.