The seventh Kent City Athletic Hall of Fame class was officially inducted on Friday evening and the same message was prevalent among this year’s inductees: the positive impact that participating in athletics as Kent City High School has played on their lives.   We are now up to 30 individuals and two teams but are always looking for more worthy candidates.   This year, Mike Shirey (Class of 1970), Mark Shirey (Class of 1975), Denny DeVos (Class of 1976), Monica Shirey (Class of 1984), and Coach Bill VanHorn (1986-1997) became the newest members.  As always, Kent City’s current student-athletes did a marvelous job of presenting at the ceremony, demonstrating the student in student-athlete.   Playing games in front of a crowd is one thing, but speaking in front of a crowd is a whole new challenge.   Our five speakers: Alyssa Larson, Taryn Preston, Eli Carlson, Brendan Boyd, and Max Hudson handled the pressure in style.   And speaking of grace under pressure, Lauren Schnicke showed her multiple talents on Friday, singing the National Anthem on senior night prior to the girls varsity basketball game, while two middle school students (Catie Crabtree — 6th grade and Lia Huizinga — 8th grade) and one elementary student (Mary Vandenberg — 4th grade) sang prior to the varsity boys basketball game.  Outstanding work!

The varsity bowling teams competed at the MHSAA Regionals on Friday and Saturday at Eastbrook Lanes.   The varsity girls team finished in 3rd place, earning them a trip to the MHSAA Team State Finals!  Only a year removed from winning a single dual, the girls team finished with a 10-1 record and are now among the top 18 teams in division 4 in the state.  The varsity boys were in the mix all day, but then slipped out of the top three and were unable to climb back in, finishing in fourth place just 16 pins out of a return trip to the State Finals.   On Saturday, junior Ty Pyne finished in third place while Curtis Poling finished in 7th place, earning them a spot in the MHSAA Individual State Finals.  Sophomore Denver Golden ended up in 32nd place.   For the girls Peytin Brake ended the day in 6th place, ensuring that she will bowl on Friday and Saturday at the finals.   Kent City’s fabulous freshmen had a good showing, but could not crack the top ten with Lauren Witt finishing in 21st, Abby Pecynski in 26th, Madi Brake in 34th, and Carissa McCullough in 43rd.   With 90 bowlers competing, Kent City had five finish in the top half.

On Friday, Kent City’s varsity girls basketball team put an exclamation point on their regular season, easily defeating an over matched Holton team 68-12 on senior night.   Junior Jenna Harrison led all scorers with 21 points, while Kenzie Bowers chipped in 15 points.   Kent City finishes 10-0 in the CSAA Silver for their 6th consecutive league championship and an overall record of 19-1. 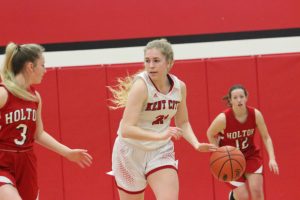 Varsity Girls Basketball @ MHSAA Districts (Kent City)
Monday, March 2 @ 7:00 p.m.; Wednesday, March 4 @ 7:30 p.m.; and Friday, March 6 @ 7:00 p.m.
March Madness is upon us! Kent City will host the MHSAA Girls Basketball Districts in the Nest beginning on Monday, March 2. The Eagles have the number one seed and should cruise to the District finals on Friday. In the first round, Kent City takes on our neighbors to the West who are much improved with a 10-10 record this season, their best record since the 2010-2011 season when they finished 11-10. However, judging by their scores against CSAA Silver opponents within the last week (41-28 loss to White Cloud and a 34-27 win over Holton) Kent City will prevent the Bulldogs from their first winning record in ten seasons. On Wednesday, Kent City will face another improved team in Hesperia, but a team they have handled in both meetings. The Panthers have dropped four in a row since Kent City beat them 71-35 two weeks ago, and will have their first meeting in the Nest on their minds when the Eagles handed them their biggest loss of the season 62-17. The finals on Friday should be what we expected, Kent City vs. conference arch-nemesis Morley Stanwood. The Mohawks finished the season 17-3 with two of their three losses coming at the hands of Kent City. The last time they played in the Nest, Kent City ran away with a 75-33 victory. More recently at Morley Stanwood, the Eagles pulled away late for a 42-30 win. Both teams have won two consecutive District championships and have not been paired in the Districts since the 2012-2013 season when Kent City defeated Morley Stanwood 59-43. 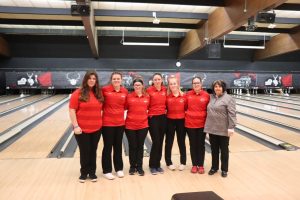 Varsity Girls Bowling @ MHSAA Team State Finals (Royal Scot — Lansing)
Friday, March 6, 2020 @ 8:25 a.m.
One of the best turn-around stories in some time, Kent City’s varsity girls bowling team has shown that they are for real this season after winning a single dual match in the past three seasons (2016-2019). Their top five bowlers consist of one sophomore and four freshmen. On Saturday, the Eagles will have to master the Baker games to be among the top eight teams who will play in the head to head tournament to determine the state champion, more precisely, eight Baker games. In addition to the Baker games each team will bowl two Peterson games. During the head to head tournament teams will bowl two Baker games and one regular game. The Baker games make it difficult for the bowlers to get into a regular rhythm, since they are only bowling ever fifth frame. Therefore, if one bowler is having a bad day and leaving open frames, the entire team suffers. Kent City is capable of success in the Baker games, on Saturday, the Eagles led the field with a 798 (133 average) following six Baker games. Last year’s cut-off following eight Baker games at the Division 4 State Finals . . . a 129 average. 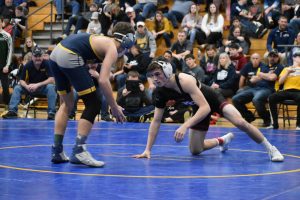 Varsity Wrestling @ MHSAA State Finals (Ford Field — Detroit)
Friday, March 6 @ 11:30 a.m. and Saturday March 7 @ 9:00 a.m.
For the third year, the MHSAA Individual Wrestling State Finals will be held at Ford Field in Detroit. Kent City has two wrestlers who made the cut, senior Jayden Williams at 119 lbs. and freshman Zane Kik at 103 lbs. Williams is making his second trip to the finals after qualifying for the first time last season. Williams is the third ranked wrestler, one of four regional champions in the 16 man bracket. Kik made it by placing 4th at the regional, which means he will face a regional champion in his first round match on Friday. The magic number is two for these Eagle grapplers, win two before you lose two and you will be wrestling for a medal on Saturday. Anything can happen, especially when you bring the top 16 wrestlers in the state together, however experience generally plays a major factor in success at this event. That definitely bodes well for Williams who was one match away from a medal as junior, and although this is the first time Kik will be competing, it is a safe bet that he has been at more state finals than any of the wrestlers in his bracket . . . as a spectator. Over half of the bracket is making their first appearance at the state finals as well, since nine of the 16 wrestlers are freshman. Two seniors are in the 103 lb weight class, Kik’s first round opponent and the Vermontville Maple Valley wrestler who defeated the freshman in the District Finals at Bloomingdale. The 119 lb bracket will have a new champion in 2020 as last year’s state title winner graduated and the runner-up disappeared. However, the number one seed was the champion at the 112 lb. weight class and the 2nd seed was a 7th place finisher at 112 lbs in division 3 in 2018-2019. Both wrestlers will simply take it one match at a time, leaving it all on the mat. 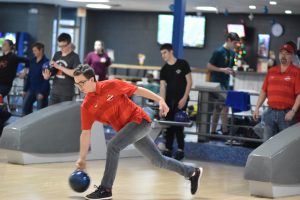 Varsity Bowling @ MHSAA Individual State Finals (Royal Scot — Lansing)
Saturday, March 7, 2020 @ 8:25 a.m.
Kent City qualified three bowlers for Saturday’s MHSAA Individual State Finals at Royal Scot Bowling Center in Lansing. Ty Pyne and Curtis Poling will represent the boys, while Peytin Brake made the cut in her second year as a varsity bowler. Pyne had the highest finish for Kent City at Regionals, finishing in 3rd place, while Brake ended up in 6th place and Poling came home in 7th place. On Saturday, 60 bowlers (top ten from each of the six regionals) will bowl six Peterson games. Following these six games, the top 16 boys and the top 16 girls will be seeded according to the results of the morning session in a head to head tournament pitting bowler against bowler in two complete games. With a possible four rounds to win it all, this adds eight more games to the six games already bowled! It is a marathon of bowling to say the least. Obviously, being in the top 16 after six games is key, and after that, anything can happen. Stamina and maintaining focus throughout the day will be paramount for a top 16 finish and a crack at an individual state championship. For the boys, twelve of the top 16 bowlers from 2018-2019 have graduated and all of the top eight are now alumni. Similar numbers exist for the girls with 11 of the top 16 gone due to graduation and seven of the final eight no longer at their schools. Last year’s cut score for the girls was 169.33 average, while the boys’ target average was ten pins higher at 179.6; both scores the Kent City bowlers are able to achieve, and have several times in the CSAA Jamborees throughout the season.