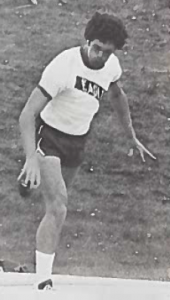 Inducted in 2020, Denny was the definition of a three sport athlete, leading the Eagles in football, basketball, and track and field.

Have we left someone out?  Please help us by nominating those student-athletes, coaches, and teams from Kent City.  Nominations for the 2021 Kent City Hall of Fame Class will be accepted until Monday, December 7, 2020.