Believe it or not, our winter sports season is quickly coming to an end.   It seems like it has really gone fast this year, but last weekend marked the beginning of the post-season for our wrestling team.  Always the first to start post-season contests, the wrestling team will be followed by our boys and girls bowling teams next week as they take part in the MHSAA Regionals.  Today, the pairings for the MHSAA Tournament in girls basketball were announced.  Kent City earned the 1st seed in our district which we are hosting in the Nest.  The Eagles will play our neighbors to the west on Monday, March 2 at 7:00 p.m.  The boys’s MHSAA Tournament pairings will be announced a week from today.   It is the time of the season that we want to be at our best, because if you lose, your season is over.  Kent City has some unfinished business this year, so I am expecting some of our winter seasons running well into March!

The varsity wrestling team hosted team Districts in wrestling for the 6th consecutive season, unfortunately, we were unable to beat a tough Carson City Crystal team again, losing to the Eagles, 43-22.  Kent City forfeited three weight classes in the District finals match, giving up 18 points.  Overall Kent City wrestled tough, with several matches going all three periods against last year’s division 4 semi-finalists.   In their opening match against Lakeview, Kent City easily defeated the Wildcats by a final of 60-9.   Kent City finishes the season with a record of 22-9 in dual meets.  On Saturday, Kent City had six advance to the MHSAA Regionals by finishing in the top four at Districts at Bloomingdale High School.  Senior Jayden Williams brought home the team’s only District title at 119 lbs., while freshman Zane Kik made the championship match but lost, settling for a 2nd place finish.   Junior Bradley Brooks finished in third by winning his consolation championship match, while Jake Anderson, Austin Neuman, and Dolan Bair all extended their senior seasons by finishing in 4th place.

Kent City’s varsity girls basketball team clinched at least a share of the CSAA Silver championship at Morley Stanwood on Friday.  Kent City ran into a much different Mohawk team than in their first meeting, beating Morley Stanwood 42-30 as opposed to 75-33.   Kent City built a double digit lead early in the second half, but Morley Stanwood would not go away, cutting the lead to just 2 points in the fourth quarter, 27-25.   Kent City responded, outscoring the Mohawks 15-5 over the final seven minutes of the game.   Juniors Kenzie Bowers and Jenna Harrison led Kent City with 19 and 17 points respectively.  Kent City is now 8-0 in the CSAA Silver and 16-1 overall.

The varsity bowling teams competed in their final CSAA Silver Jamboree on Saturday at the Alley Cat in Lakeview.  At the end of the day, three boys and three girls earned all-conference honors.   Leading the way was sophomore Peytin Brake who had the high score on the day with a 1,066 pins in six games (177.6 average), she finishes as the top bowler in the conference.   Also earning 1st team all-conference was freshman Lauren Witt.  Witt finished in 3rd place in the conference after averaging a 150.16 on Saturday in three games.   Freshman Abby Pecynski earned an honorable mention all-conference finish with a fourth place finish in total pins and a fifth place finish in average.  For the boys, Ty Pyne finished in 2nd place overall for a 1st team all-conference nod.   Pyne knocked down 1,167 pins (194.5 average) on the day, his second best showing at a CSAA Silver Jamboree.  Also earning 1st team all-conference was Curtis Poling for the second year in a row, he shot a 948 on Saturday (158 average), putting him in fourth place for pins and average.   Sophomore Denver Golden earned honorable mention all-conference honors finishing in fifth place for pins and sixth place for average. 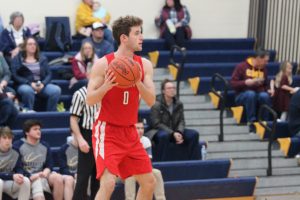 Varsity Boys Basketball vs. Kenowa Hills
Tuesday, February 18, 2020 @ 7:00 p.m.
The varsity boys basketball will welcome the Knights of Kenowa Hills to the Nest on Tuesday for the third consecutive year of this non-conference battle.  After playing in the Delta Plex the first two seasons, we decided to host the game in our gym since several of our non-conference games were on the road.  The Eagles have split with the class A Knights in their last two meetings, Kent City picked up the win in 2017-2018, 49-44, while Kenowa Hills won last year, 46-43.  Kent City has dropped two straight, losing to Fremont and Morley Stanwood and is in need of win to get back on track.   Kenowa Hills is 7-8 overall and 4-5 in the O.K. Black Conference which features all Class A schools.  On Friday, the Knights picked up a 65-44 victory over Muskegon Mona Shores.   A familiar face leads the Knights in coach Ross Willick who led Kent City to the MHSAA Semi-Finals in 2004.  If Kent City can keep the scoring in check like they have in the previous two meetings, they should have success against the Knights — Kenowa Hills has not won a game in which they scored less than 52 points 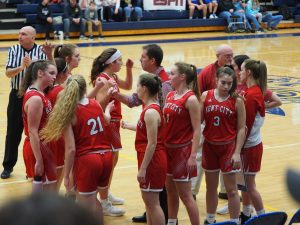 Varsity Girls Basketball @ Hesperia
Friday, February 21, 2020 @ 5:30 p.m.
The Eagles can officially clinch their 6th consecutive CSAA Silver championship on Friday with a win over Hesperia.  The series has been one-sided since joining the conference in 2014-2015 with Kent City taking 11 of 11 games from the Panthers, and by very wide margins.   In the first meeting Kent City handed Hesperia their biggest loss of the season, defeating the Panthers in the Nest 62-17.  It is important to give credit where credit is due though, the Panthers have been improving in girls basketball, as they are not far removed from a string of one or two win seasons.   This year Hesperia is one game under .500 at 7-8 overall has three games in their last fives that they should be competitive in.   However, Friday will not be one of them as Kent City still rules the court in the CSAA Silver. 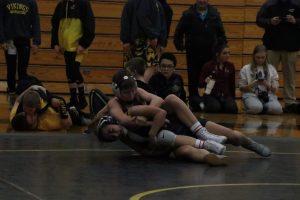 Varsity Wrestling @ MHSAA Individual Regionals (Carson City Crystal)
Saturday, February 22, 2020 @ TBA
Kent City will travel to Carson City Crystal on Saturday for the MHSAA Individual Regionals.  Just like the Districts, a top four finish advances wrestlers to the next round, in this case, to Ford Field for the State Finals on Friday, March 6 and Saturday, March 7.    The top four from the Bloomingdale district will meet the top four from the New Lothrop district at Carson City Crystal.   Kent City has one wrestler who has made the final before in senior Jayden Williams.  Williams won a match last year, but then lost two consecutive matches, failing to make the cut.  This year, Williams enters Regionals as the District champion in the 119 lb weight class and is seeded 1st at Regionals.  Freshman Zane Kik should also have a good shot at making it out.  The other four qualifiers will have to beat a higher seed to advance, but it is a matter of how good was the New Lothrop district?  Bradley Brooks will have to face a 2nd seed in the first round, while Jake Anderson, Austin Neuman, and Dolan Bair will all wrestle District champions in their opening bout.  We will know the answer when the dust settles on Saturday at Carson City-Crystal.