It is Morley Stanwood week.  Sure we have a lot of great events for you in the next six days, but none bigger than Kent City vs. Morley Stanwood on the hardwood on Friday night.  Since joining the CSAA Silver in 2014-2015, the Kent City vs. Morley Stanwood match-up has developed into a very nice rivalry between the two schools.  However, the rivalry between the two schools dates back to 1960 when Morley Stanwood joined the Newaygo County Athletic Association and remained in that conference until it disbanded in 1997 when many of the teams joined the Western Waterways Athletic Conference — C (Kent City included).   These days, when Kent City and Morley Stanwood meet up, a conference championship is usually at stake, which has intensified the rivalry.  Friday’s games at Morley Stanwood are no different, both teams need a win as the final two conference titles for the 2019-2020 winter sports seasons are at stake.  The best part of the rivalry is the mutual respect shown between the two competing schools.  When we are not playing the Mohawks, we are cheering for them, and I would like to think they do same for us.   The rivalry is heated on the playing field, but out of the arena, several of our student-athletes are friends.  So on behalf of Kent City, we wish Morley Stanwood the best of luck . . . next Friday when they travel to White Cloud 🙂

At Sparta Lanes, Kent City’s bowling teams picked up the 2nd and 3rd conference championships of the 2019-2020 winter season.  The varsity boys defeated last year’s conference champions, Lakeview, 26-4 in the first dual.  Ty Pyne led the team with a 180 and 211.  Denver Golden (182 and 171), Curtis Poling (151 and 192), Jud Weber (153) and Devin Bair (154) all helped secure the win.   Then in the second dual against conference arch-nemesis Morley Stanwood, Kent City defeated the Mohawks 21-9.   Ty Pyne again led the team with a 172 and 180, while Jud Weber chipped in with a 171 and Devin Bair contributed a 160.  The Eagles finished 6-0 in the CSAA Silver winning their first conference championship since joining the league.

The varsity girls basketball team flexed their muscle this past week, easily defeating Central Montcalm on Tuesday, 72-48 and then traveling to Lakeview on Friday, defeating a struggling Wildcat program 67-2.  Against the Hornets, Kenzie Bowers scored 27 points, while Taryn Preston and Jenna Harrison added 14 and 13 points respectively.  Then on Friday, Bowers again led the scoring with 16 points, followed by Lexie Bowers and Mikayla Loew with 10 points each.   Kent City now stands at 15-1 overall and 7-0 in the CSAA Silver conference.

Kent City’s varsity boys basketball team also remained perfect in the CSAA Silver conference with an 80-40 victory over Lakeview on the road on Friday.  Eli Carlson hit eight three pointers in the win, finishing the game with 33 points.  Freshman Kyler Larson was also in double digits with 10 points.   Kent City is 9-4 overall and 7-0 in the CSAA Silver.

On Wednesday, the varsity wrestling team traveled to Tri-County for a quad with the Vikings and the Grant Tigers.  Kent City defeated the Tigers, but fell to Tri-County.  Then on Saturday, Kent City took part in the CSAA Championships at Central Montcalm High School.  The Eagles did not have a good day, as no one earned 1st team all-conference and only four wrestlers were honorable mention all-conference (3rd or 4th place).  Those earning honorable mention all-conference included Zane Kik (3rd place), Dolan Bair (3rd place), James Farrington (3rd place), and Pedro Diaz Charles (4th place). 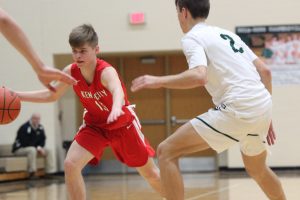 Varsity Boys Basketball vs. Fremont
Tuesday, February 11, 2020 @ 7:00 p.m.
Last week we had a crossover of the two top CSAA teams in girls basketball, this week, we will do it again, only this time we have the top CSAA teams in boys basketball.  Kent City is currently 9-4 overall on the season and 7-0 in the CSAA Silver (1st place), and they will take on Fremont who is 11-3 overall and 8-1 in the CSAA Gold (1st place). The match-up is one we have been trying to line up for years now, and we were finally able to find a common open date this season. The two teams share several opponents on the schedule, although Grant is the only opponent both have played at this point in the season. Kent City opened the year with a 65-53 victory over the Tigers, while Fremont beat Grant 67-63 in mid-January. Fremont suffered two consecutive losses last week, including their first conference loss of the season. On Tuesday, the Packers lost in overtime at home to Orchard View, 63-60, while on Friday, Fremont fell on the road at Big Rapids 60-50. 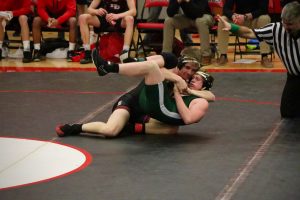 Varsity Wrestling MHSAA Team (Kent City) & Individual Districts  (@ Bloomingdale)
Thursday, February 13 (Team) @ 5:30 p.m./Saturday, February 15 (Individual) @ 10:00 a.m.
Wrestling’s post-season begins this week. On Thursday, Kent City will host the MHSAA Team Districts in the Nest for the sixth consecutive season. Kent City will open the night against CSAA Silver foe, Lakeview, a team they defeated during the conference season 54-24. If the Eagles can pick up the win against Lakeview, they will most likely face Carson City Crystal again, who ended Kent City’s string of consecutive District championships at eight last year when they handed Kent City a 58-12 loss. Carson City Crystal is having another great season, despite losing several key wrestlers to graduation last year. Then on Saturday, Kent City will travel to Bloomingdale for the MHSAA Individual Districts. Wrestlers must finish in the top four to advance to Regional round at Carson City Crystal on Saturday, February 22. Last year, Kent City had five wrestlers advance with Jayden Williams, Jesus Hernandez, and Jake Anderson among the group. In addition to those three, Bradley Brooks (junior) advanced to the regional round as a freshman.  Finally, don’t count out some of the newcomers to Eagles’ line-up as well as veterans who are making their final bid at advancing in the post-season. 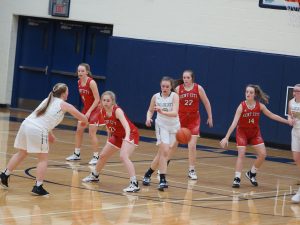 Varsity Girls and Boys Basketball @ Morley Stanwood
Friday, February 14, 2020 @ 5:30 p.m. (Varsity Girls) and 7:00 p.m. (Varsity Boys)
Round 2 of this rivalry will take place in the wood on Friday night. Both Kent City teams picked up wins in the Nest in this CSAA Silver championship determining game back in January. The varsity girls unloaded on the Mohawks, handing Morley Stanwood their only loss of the season with a 75-33 victory. The Mohawks’ defense failed them on that night, as the Eagles are the only team to break 50 points against them the entire season. In fact, Morley Stanwood’s 54-49 victory over 13-1 Lake City was the second highest output by an opponent, a 26 point difference! This will most likely not be the last meeting in 2019-2020 between the Eagles and Mohawks, if the MHSAA tournament were to start today, Kent City would be the number one seed and Morley Stanwood would be the number two seed in the Districts. In the nightcap, the varsity boys can pretty much seal a CSAA Silver championship with a victory on Friday. In their first meeting, Kent City held on for a 67-61 victory. The loss to the Eagles, is Morley Stanwood’s only one this year, but they have had a number of close calls. In fact, the first game after the Kent City loss, Morley Stanwood went into overtime with a 3-8 Leroy Pine River team, pulling out the win, 58-50. The Mohawk’s scores vs. Holton have also been close: 52-46 in the first meeting and 43-35 last Friday. You can bet that both Morley Stanwood teams will be ready for the challenge in front of a home crowd. 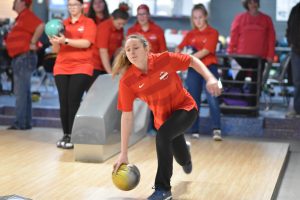 Varsity Bowling @ CSAA Jamboree (The Alley Cat)
Saturday, February 15, 2020 @ 1:00 p.m.
The varsity bowling team will travel to the Alley Cat in Lakeview on Saturday, for the final CSAA Silver Jamboree of the season.  The third and final jamboree of the 2019-2020 season, each bowler will bowl six games with the scores being added to the final all-conference standings.   Kent City has some work to do with several bowlers within striking distance of finishing in the top eight in the conference and earning all-conference or honorable mention all-conference.  Sophomore Peytin Brake has a comfortable lead atop the conference with a 162.92 average and 3,910 pins, which is a 20 pin margin for average and 586 pin advantage in total pins over the 2nd place bowler, who is also from Kent City — freshman Lauren Witt.  Abby Pecynski is also in good shape, currently residing in 5th place, while freshman Madi Brake is right on the cusp of an honorable mention nod as she is in the top ten.  For the boys, Ty Pyne has seen his lead dwindle atop the conference with a late charge from Lakeview’s Riley Devereaux.  Pyne still owns the top spot with a 198.50 average (0.17 lead) and 4,764 pins (4 pin lead).  Curtis Poling moved back into fourth place following the weekend while Denver Golden is in 5th place.   Jud Weber is right in the mix and can reach an 8th spot with a good day on Saturday.