This week’s featured image is a great depiction of the kind of winter it has been for Kent City Athletics . . .  fun-filled, exciting, and SUCCESSFUL.   Amber Larson captured this panoramic view late in Kent City’s varsity boys basketball victory against conference arch-nemesis and previously unbeaten Morley Stanwood.  Last week, the varsity wrestling team delivered Kent City’s first official CSAA championship of the winter in a win over Hesperia.  This week the varsity bowling teams can clinch conference championships on their home lanes in a double dual against Lakeview and Morley Stanwood.   Our varsity basketball teams remain alone atop the CSAA Silver with four more conference games remaining.  If you have not been following this year’s winter sports teams, we are down to the final month (essentially) of the season, and you are missing out on arguably the most successful, collective winter season in school history.   There will be plenty of opportunities to catch the Eagles in February, so stay tuned to the schedules and watch the 2019-2020 version of the Kent City Eagles, I promise you, you will be glad you did!

It was a big week for the varsity girls basketball team with a short trip to Sparta and conference match-up with an up-start White Cloud team in the Nest on Friday.  On Tuesday, Kent City struggled to knock down shots, but still picked up their 16th win in 17 tries over the Spartans, 40-34.   Kenzie Bowers led the Eagles with 18 points.   On Friday, Kent City overwhelmed the Indians, especially defensively, scoring a 54-20 victory.  Lexie Bowers led all scorers with 17 points, while Kenzie Bowers added 13 and Jenna Harrison had 11.   The Eagles are now 13-1 on the season and 6-0 in the CSAA Silver conference.

The varsity boys basketball team also beat Sparta on Tuesday, 78-71.   Kent City jumped out to a 16-0 lead and a 43-26 halftime advantage, before growing a bit complacent in the 2nd half.  The Eagles held on down the stretch though, never trailing their neighbors to the south.   Four players were in double figures, Eli Carlson, Shawn Anderson, and Will Wright who all hit for 18 points, while Max Hudson pumped in 15 points.  Eli Carlson eclipsed the 1,000 point mark for his career with some late free throws.   On Friday, White Cloud showed some fight early in the game, but Kent City’s balanced attack put the Indians away, 68-48.  Will Wright was the high scorer with 19 points, followed by Eli Carlson with 17 and Max Hudson with 14.   Kent City is now 8-3 overall and 6-0 in the CSAA Silver.

It was a busy week for the varsity bowling teams with three events, including a make-up CSAA Silver Jamboree.  On Monday, the varsity boys bowlers defeated Hopkins at Sparta Lanes, 22-8.  The three amigos led the way with Ty Pyne bowling a 199 and a 185; Curtis Poling scoring a 185 and 204; and Denver Golden adding a 161 and 170.  Then on Tuesday, the varsity girls defeated Potter’s House at Park Center Lanes 22.5 to 7.5.   Carissa McCullough led the Eagles with a 138.

On Thursday, Kent City traveled to Northway Lanes to compete in a CSAA Silver Jamboree that featured six regular games.   Peytin Brake led the way for Kent City (and the conference) with a total score of 912 (152 average).  Freshmen Lauren Witt scored a 825 (137.5 average) while Abby Pecynski totaled an 821 (136.6 average) for the fourth and fifth best scores on the day respectively.  Peytin Brake still holds the top spot in the conference through 20 games while Lauren Witt is in 2nd place, Abby Pecynski is in 4th place , and Madi Brake slipped down to 9th place.  For the boys, Ty Pyne (1,188 — 198 average) was good enough for 2nd place on the day.  Curtis Poling came in 3rd best of all bowlers with a total of 1,067 (176.2 average).  Ty Pyne holds a slight lead in the conference standings through 20 games while Curtis Poling and Denver Golden are tied for the 4th spot.   Freshman Jud Weber is making a late charge jumping up to 11th place after another solid day on Thursday. 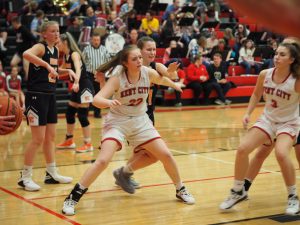 Varsity Girls Basketball vs. Central Montcalm
Tuesday, February 4, 2020 @ 7:30 p.m.
The varsity girls basketball team will be looking for revenge on Tuesday as Central Montcalm travels to Kent City.  Last year, the Hornets beat the Eagles late in the season on their way to a perfect regular season (20-0) and an appearance in the Regional Finals where they fell short against Division 2 runner-up, Freeland.  Central Montcalm did lose some key players to graduation, but are having another successful season in 2019-2020, sporting a 9-4 record and a five game win streak.   The Eagles are 13-1 with their only loss coming to Muskegon in double overtime, since that loss Kent City is 6-0 including a blow out victory over previously undefeated Morley Stanwood.   The Hornets are strong defensively, surrendering only 36 points per game.  In fact, Central Montcalm is 1-2 in games where their opponent reaches or surpasses 50 points.   Kent City has only been held below 50 points twice on the season, but they won both of those games.  The Eagles are averaging 60.7 points per game and will need to have better offensive performances than their last two outings.  All signs point to Kent City adding another high quality win to their resume in this match-up, which will help them as they enter the post-season. 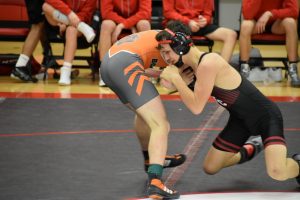 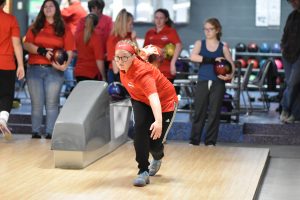 Varsity Bowling @ CSAA Silver Double Duals (Sparta Lanes) (vs. Lakeview and Morley Stanwood)
Saturday, February 8, 2020 @ 9:00 a.m.
The varsity bowling teams will have an opportunity to secure Kent City’s 2nd and 3rd conference championships of the winter on Saturday as they take part in their final CSAA Silver double dual of the 2019-2020 season.  Both teams are undefeated within the conference (4-0), and have beaten all challengers the first time around.   For the girls, Kent City easily defeated Lakeview in their first match, 28-2 and then got by conference arch-nemesis Morley Stanwood in January by a final score of 17.5 to 12.5.  The Lady Eagles need to get off to a better start against the Mohawks, they dropped both Baker games in the first meeting.   Kent City’s varsity boys picked up sweet revenge against Lakeview in their first meeting in December, shutting out the Wildcats 30-0.  Against conference arch-nemesis Morley Stanwood, Kent City earned a 23-7 victory.  In addition to counting towards the team standings, the four Peterson games count towards the bowler’s all-conference status.   This will be the last chance for our bowlers to give themselves a boost on their home lanes (Sparta Lanes), meaning those bowlers on the edge need to have a good day to put them in position heading into the final CSAA Silver Jamboree at Alley Cat on February 15.