Earlier this month, we conducted a coaches meeting for all sports in the high school auditorium.  The topic of conversation was PLT4M.   If you do not know, PLT4M is an online training tool that we use to develop our student-athletes both in and outside of our weight room.  It is a program that all of student athletes have access to created by professionals with the high school student-athlete in mind.   We are going on the offensive to ensure all of our student-athletes are taking advantage of this game changing resource (compliments of the Kent City Sports Boosters).   This is not your grandpa’s weight training program (most grandpa’s probably never lifted weights), in fact, it is much more than just the weight room.  A trend over the years has been the adoption of “weight training programs” used by collegiate athletes.   The problem has been exactly that, collegiate athletes train year round for ONE sport, our student-athletes seldom are out of season because they go from one sport to the next.

That is why I point out hat this is a program built for high school student-athletes.   We first were introduced to PLT4M by Coach Carlson, our varsity girls basketball coach.  They have been using this same program with girls basketball program for a number of years.   Gone are the programs aimed only at making our young men into big, strong incredible hulk looking creatures.   We (PLT4M) are into making our student-athletes into better athletes — regardless of the sport.  We do not have a coach in our school who does not want better athletes, and if we do, I want to know about it.   Here is the best news — it is free (Thanks to the Kent City Sports Boosters) for our student-athletes.  Here is some even better news — we use this program in our 1st and 6th periods in our physical education classes.  Our student-athletes (if they can fit it into their schedule) can earn credit to become a better athlete as well as habits that will help them live long and healthy lives, among other qualities.   If not, we run PLT4M workouts from 3:00 p.m. — 4:00 p.m. every Monday, Wednesday, and Friday following school.  And if not after school, our in-season student-athletes should be getting this done with their coaches and teams.

The varsity girls basketball team ran roughshod over conference arch-nemesis Morley Stanwood on Tuesday, 75-33.  It was clear from the start it was going to be a dominating performance as Kent City jumped on the Mohawks, building a 17-4 first quarter lead.   Kenzie Bowers led Kent City with 21 points, while Jenna Harrison added 18 points and Taryn Preston chipped in 17 points.   The Eagles connected on 16 triples against the previously undefeated Mohawks.  On Friday, the Eagles traveled to Holton and picked up a 61-21 victory over the Red Devils.   Kent City’s suffocating defense allowed just two first half points from the host Red Devils.  Kenzie Bowers scored 17 points and Taryn Preston chipped in 12 points to lead the Eagles.   Kent City is now 11-1 overall and 5-0 in the CSAA Silver conference.

It was a great week for the varsity boys basketball team as well.  Against Morley Stanwood, Kent City fell behind early, but battled back and took a small lead at the half.   In the second half, Kent City built their lead to as many as nine points, but the 8-0 Mohawks would not go quietly into the night.  Down the stretch, Kent City made some important shots and came away with a 67-61 victory.  Senior Eli Carlson led Kent City in scoring with 20 points while fellow senior Shawn Anderson added 18 points.   Then on Friday, Kent City traveled to play a scrappy Holton team, but jumped on the Red Devils early and cruised to yet another conference victory 80-55.  Eli Carlson and Max Hudson each had 22 points, while Spencer Hartley added 16 points.   Kent City is in sole possession of 1st place in the CSAA Silver at the midway point with a 5-0 record.

The varsity wrestling team took one more step toward their fourth consecutive CSAA championship this past week.  On Wednesday, Kent City traveled to Wyoming Lee where they easily defeated Lakeview 54-24.   Then in the nightcap, Kent City picked up a second victory over O.K. Silver leading Belding, 42-27.   On Saturday, Kent City traveled to the Shelby Super Duals where they compiled a 3-2 record.  The Eagles beat Grand Rapids Catholic Central, Mason County Central, and Grant, but lost to Cedar Springs and Hart.  Freshman Zane Kik went 5-0 on the day while Jayden Williams, Jesus Hernandez, Bradley Brooks, James Farrington, and Logan McVicker all finished with a 4-1 record.  Kent City’s record now stands at 18-7 overall in dual matches and 2-0 in the CSAA Silver.

The varsity bowling teams had a successful week as well, with the varsity boys defeating Wellspring and a great showing at the 1st CSAA Silver Jamboree of the season.   On Monday, the varsity boys bowling team picked up their sixth victory of the season with a 27-3 win over Grand Rapids Wellspring Academy.  Ty Pyne, Curtis Poling, and Denver Golden (the three amigos) all shot a 191 in the first game.  In game two, Pyne flexed his muscles with a 237 followed by Poling with a 199, and Golden with a 155.  At Saturday’s CSAA Silver Jamboree, Pyne maintained his stranglehold on the league lead with a 203 average after 14 games.  Peytin Brake is in the same position in the girls’ race with a 165 average after 14 games.  Others in position after 14 games include Curtis Poling (162 average) and Denver Golden (155 average) for the boys, and Lauren Witt (147 average), Abby Pecynski (138 average), and Madi Brake (131 average) for the girls. 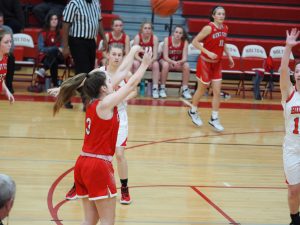 Varsity Girls and Boys Basketball @ Sparta
Tuesday, January 28, 2020 @ 5:30 p.m. and  7:00 p.m.
The war on the ridge is renewed for yet another season, this year’s installment happening at Sparta High School.   In the girls’ game, Kent City will look to add to their 15-1 series lead since 2003-2004 with a win over the 5-6 Spartans.  Last year, Kent City ran away with this game beating Sparta by 25 points in the Nest (62-37).  If you are looking at common opponents, give Kent City the edge as they share one team that both schools beat (Grant), but there are three teams who Kent City beat and Sparta lost to: Comstock Park, Coopersville, and Cedar Springs.   However, games are not played on paper and with any bigger school (Sparta 780 students and Kent City 340 students) you had better bring your A game or it will prove to haunt you.  In the nightcap, the varsity boys game should prove to be an intriguing match-up.  Sparta started the year off on fire, winning their first five games and garnering state wide recognition (MHSAA’s Road to the Breslin).  Since that time, Sparta has failed to win a game, dropping five straight.  Last year, the Eagles squandered a lead late and Sparta took full advantage, winning in double overtime (58-55).  Two common opponents adorn their schedules in Holton and Grant — teams both Sparta and Kent City defeated.  The Eagles would love to add another W to the win column in this series, which they lead 10-6 since 2003-2004, but it will not come easy. 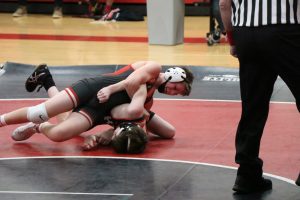 Varsity Wrestling vs. Hesperia and Belding 5:00 p.m. (Parents’ Night/Senior Night)
Wednesday, January 29, 2020 @ 5:00 p.m.
Both schools had this date circled on their calendars long before the season even began. In the CSAA Silver — Kent City vs.Hesperia = League Championship. This year is no different. Kent City (2-0) and Hesperia (2-0) will face each other in the CSAA Silver deciding dual on Wednesday in the Nest, as Kent City chases the team’s fourth consecutive CSAA Silver championship. The Eagles have slowly put some distance between themselves and the Panthers since 2016, the last time Hesperia beat them (46-30). In 2017, Kent City jumped out to a 30-6 lead before Hesperia came roaring back. Kent City held on for a 40-36 victory on their way to their first of three league titles. Then in 2018, Kent City came up with some big wins to earn a 39-32 victory over the Panthers. Last year was much less dramatic as Kent City scored a 53-18 win over Hesperia. Kent City has defeated two schools who beat the Panthers: Belding and Orchard View. That does not hold much weight in this rivalry though, as you can expect that Hesperia will have everyone ready to go on Wednesday chomping at the bit to knock the Eagles from their perch. Following the CSAA Silver match-up, Kent City will wrestle O.K. Silver champion Belding in the nightcap. Wednesday will be intense in the Nest — if you have never been to a wrestling meet, this would be a good one to introduce you to the sport. 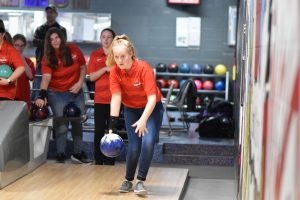 Varsity Bowling @ CSAA Silver Jamboree (Northway Lanes)
Thursday, January 30, 2020 @ 11:00 a.m.
The varsity bowling team will head to Northway Lanes on Thursday for a make-up CSAA Silver Jamboree that was originally scheduled for Saturday, January 11.  Thursday’s jamboree will be the second of the season following last Saturday’s event at the Alley Cat.  Each bowler will complete 6 games, all of which will go towards the individual conference standings to determine all-conference.  The top four bowlers in the CSAA Silver were be 1st team all-conference, while bowlers 5-8 will be classified as honorable mention all-conference.   Currently Kent City has 7 bowlers in contention for All-Conference after 14 games. Leading the way are junior Ty Pyne (1st) for the boys and sophomore Peytin Brake (1st) for the girls. Others in position for league honors include freshman Lauren Witt (2nd), freshman Abby Pecynski (4th), junior Curtis Poling (tied for 4th), sophomore Denver Golden (tied for 4th), and freshman Madi Brake (6th). Four more bowlers are still in the hunt and could really improve their standings with a great day on Thursday — freshman Devin Bair (13th), freshman Judd Weber (16th), freshman Luke Braman (17th), and junior Mia Schwartz (17th). This is especially true considering 16 of the 30 games are still left to bowl before the final all-conference roster will be determined.