We are to that point in January when the conference races will be decided for our winter sports teams.  As of today, all five of our winter sports teams are in 1st place in the CSAA Silver, which has never been the case since joining the conference back in 2014-2015.   Each team is at different stages of their conference race, but we will know much more by this week’s end.   On Tuesday, we will host conference arch-nemesis Morley Stanwood in boys and girls basketball which will give the winner a huge leg up on this season’s championship.  The following Wednesday, the varsity wrestling team will host conference rival Hesperia in a dual that will surely decide the league.  And then on Saturday, February 8, the varsity bowling team will have the opportunity to put the finishing touches on a league championship at their home lanes, Sparta Lanes.   I invite you to take advantage of the Eagle’s success and come out and support our student-athletes as they battle for conference championships at HOME!

The varsity bowling teams are both one win away from securing a conference championship following Saturday’s double duals at the Gate in Big Rapids.   The Eagles have now defeated all challengers in the CSAA Silver conference, both defeating conference arch-nemesis Morley Stanwood on Saturday.  For the girls it was a close match, but the Eagles were able to secure a 17.5 to 12.5 victory over the Mohawks.   Kent City dropped both Baker games, but dominated the Peterson games behind a 183 from freshman Lauren Witt, a 168 and 164 from sophomore Peytin Brake, and a 143 and 148 from freshmen Madi Brake and Abby Pecynski respectively.   In their second dual against Holton, the girls again fell in the first Baker game, but were able to recover and win the second as well as both Peterson games for a 22 to 8 victory.   Lauren Witt continued with the hot hand recording a 172 and 163 to lead the Eagles while Abby Pecynski chipped in with a 170.  Kent City is 4-0 in the CSAA Silver and 6-0 overall in duals this season.

The varsity boys also took care of business at the Gate, defeating Morley Stanwood 23-7.  Junior Ty Pyne had his best game of the season in the opening Peterson game with a 264, followed by a 189.   In their second dual, Kent City defeated Holton again, 25-5.   Ty Pyne led the team with a high score of 227, while freshman Luke Braman contributed a 153 and sophomore Denver Golden added a 168.   Like the girls team, the Eagles are 4-0 in the CSAA Silver, but 5-0-1 overall in dual matches.

While the bowling team is two-thirds through the 2019-2020 conference season, the varsity wrestling team just started their CSAA Silver journey this past week.   On Wednesday, Kent City traveled to Holton where they took on the Red Devils in the opening dual, easily picking up a 57-10 victory.   Then on Saturday, Kent City won their first tournament of the season at Lakeview where 12 of the 14 wrestlers earned medals.  Leading the way were Jayden Williams, Jesus Hernandez, and James Farrington with 1st place finishes; Zane Kik, Bradley Brooks, Jake Anderson, and Logan McVicker with 2nd place finishes; while Brayden Armstrong and Dolan Bair picked up bronze medals.

The varsity girls basketball team had a busy week finishing 2-1 in their three games.  On Tuesday, the Eagles fell short to class A Muskegon in double overtime, 60-57.  Then on Friday, Kent City dominated Hesperia from the start on their way to a 62-17 victory over the Panthers.   Kenzie Bowers scored 17 points to lead all scorers, while Jenna Harrison and Mikayla Loew contributed 11 and 10 points respectively.   Finally, on Saturday, the Eagles made the short trip east to Cedar Springs and came away with a 51-46 victory over the Red Hawks.  Bowers was the leading scorer again with 22 points, while Jenna Harrison added 10 points.   Kent City is 9-1 overall and 3-0 in the CSAA Silver.

On Friday night, Kent City’s varsity boys jumped out to a 25-1 lead following one quarter against Hesperia on their way to a 77-16 win.  Eli Carlson led all scorers with 18 points while Hayden Carlson, Max Hudson, and Casen Armstrong each had 11 points.   On Saturday, the Eagles fell short against Cedar Springs, 68-60.  Overall, Kent City is 4-3 on the season with a 3-0 record in the CSAA Silver. 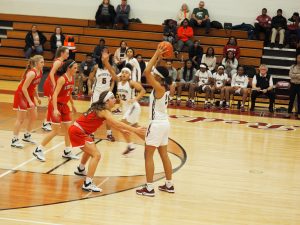 Varsity Girls Basketball vs. Morley Stanwood
Tuesday, January 21, 2020 @ 5:30 p.m.
Any time Kent City welcomes their conference arch-nemesis Morley Stanwood to town, it is always a must see. This year’s match-up is shaping up to be extra special as the Mohawks appear to be back in championship form with an 8-0 record.   Morley Stanwood picked up a signature win last week, defeating previously unbeaten Lake City, 54-49.  Kent City let their signature win slip through their fingers in their double overtime loss to Muskegon last week.  The Mohawks are the only team in the league to defeat Kent City since the Eagles’ first year in the CSAA Silver, that victory came on January 22, 2016 in the Nest, a 55-41 Mohawk victory. It is highly likely that these two rivals will play three times this year, twice during the regular season and again in the District Finals which will be hosted in the Nest. The winner of that game will travel to, you guessed it, Morley Stanwood for Regionals. 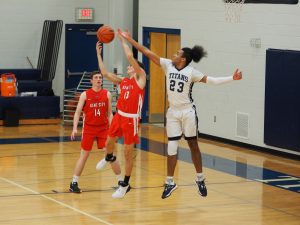 Varsity Boys Basketball vs. Morley Stanwood
Tuesday, January 21, 2020 @ 7:00 p.m.
Over the past four seasons Kent City and Morley Stanwood have finished in first or second place in the CSAA Silver in boys basketball, with each team capturing two league titles. It started in 2015-2016 when Kent City won the league championship, followed by Morley Stanwood in 2016-2017, the Eagles and their perfect regular season in 2017-2018, and the Mohawks with an 18-2 record last year. Morley Stanwood is off to another great start in 2019-2020 with 7-0 record, while Kent City has a 4-3 mark.  Kent City enters this game as the under dog against a Morley Stanwood squad returning several key players from last year’s team who beat Kent City by 11 and 12 respectively.  A win at home would put the Eagles in the driver seat for the CSAA Silver race. 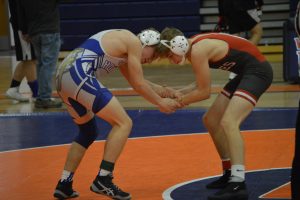 Varsity Wrestling @ Wyoming Lee (vs. Lakeview & Belding)
Wednesday, January 22, 2020 @ 5:00 p.m.
Kent City can move one step closer to a fourth consecutive CSAA Silver championship in wrestling with a win on Wednesday over Lakeview.   The two will meet in the first match of their double dual at Wyoming Lee.   A familiar foe, the Eagles have had Lakeview’s number the past few years meeting up with the Wildcats multiple times each year.   Last year, Kent City easily defeated Lakeview 66-6 in the Nest on senior night.   This year, the Wildcats are 0-1 in CSAA Silver action, losing to Hesperia last week 48-36.   Lakeview and Kent City have one common opponent so far in 2019-2020 in Muskegon Catholic Central.  Both teams defeated the Crusaders and by comparable scores.   The Wildcats defeated MCC 51-24 back in December, while Kent City scored a 57-18 win in January.   In the night cap, Kent City will face off with O.K. Silver front-runner Belding.   The Black Knights have dominated the conference since joining in 2016-2017.   A win over Belding would give Kent City wins over two other conference champions as they have already defeated Orchard View (Lakes Eight champions).

*** The dates and times may change for our middle school events on Saturday.