Hopefully everyone enjoyed a great holiday season.  We will ease into 2020 this week building towards our Service Saturday in the Nest featuring five basketball games beginning at 12:00 p.m. and ending with the varsity boys against conference arch-nemesis Morley Stanwood scheduled to tip-off at 6:00 p.m.   We will also pause to thank two long time, loyal Eagles for all of their unselfish service to Kent City Athletics, Bob Coalter and Lyle Hanna.     Although we have yet to compete in 2020, our performance from all of our winter teams in December points to a great winter season.

Leading up to the break and over vacation, Kent City was in action across west Michigan.  The varsity wrestling team competed in three events (one quad and two tournaments) to finish out 2019, improving their record to 10-4 on the season.   On Wednesday, Kent City traveled to Kelloggsville where they easily defeated last season’s Lakes Eight champions Orchard View, 64-18 and then dominated the host Rockets 67-12.   Then on Saturday, the Eagles competed in the Kent County Championships at Forest Hills Central High School where they finished in 9th place overall.   Kent City had two medalists in this 22 team individual tournament, senior Jayden Williams in 3rd place and freshmen Zane Kik in 6th place.   Then following Christmas, Kent City returned to the Coopersville Military Appreciation Tournament, a tournament they won last year, and picked up four more wins against Zeeland West (57-18), Northview (59-18), Coopersville (42-37), and Ravenna (57-24).   Kent City fell to Hastings (48-30) putting them in a three way tie for 1st place, but were awarded 3rd place due to criteria .  Seniors Jayden Williams and Dolan Bair, along with junior Bradley Brooks finished 5-0 on the day.

The varsity girls basketball team also played two games, easily winning both games.   On Friday, the Eagles cruised by Lakeview in their home opener 81-28.  The Eagles were lead by junior Kenzie Bowers and Jenna Harrison with 27 and 24 points respectively.  Then on Saturday, Kent City put on a show in the Cornerstone University Holiday Showcase against Kalamazoo Christian, defeating the Comets 79-33.  Kenzie Bowers lead all scorers again with 31 points, enough to surpass 1,000 points for her career at Kent City!  Jenna Harrison chipped in 16 points, while Taryn Preston added 10 points.

The varsity bowling teams had one non league dual against Allendale, as well as a tournament at Northway Lanes leading up to the new year.   Both teams easily defeated Allendale at Sparta Lanes giving them a 3-0 record on the season.  The varsity girls defeated the Falcons 25-5 behind a great game from freshman Lauren Witt (145).  The boys defeated Allendale 28-2 with Ty Pyne and Curtis Poling leading the way with a 204-176 and 152-202 respectively.

Then at the Orchard View Cardinal Invite the varsity girls finished the qualifying round in 2nd place.   They fell in the semi-finals Fruitport.   Sophomore Peytin Brake took home the top honors for total pins (414) and high game (224)!   The varsity boys fell short of the tournament play, finishing the qualifying round by only 28 pins in fifth place.   Junior Ty Pyne finished the day in 5th place for total pins (400), earning him a medal.

Three You Don’t Want to Miss 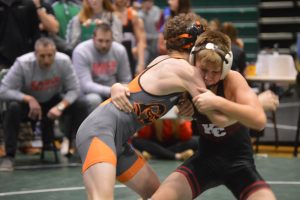 Varsity Wrestling @ Sparta Invitational
Saturday, January 11, 2020 @ 10:00 a.m.
On Saturday, the varsity wrestling team will make the short trip south to Sparta for the always tough Sparta Invitational. An individual tournament, Kent City finished in 9th place out of 20 teams in 2019. Overall, Kent City had five medalist including a 1st place finish by Evan Jones. Other medalist included Hunter Carr (3rd), Jayden Williams (4th), Alex Russo (5th), and Dolan Bair (6th). Both of the returning seniors will be favorites to medal again in 2020, but will strive for a higher finish. Look for some others to break through for a top six finish including a couple of freshmen who have had a great start to their high school careers in Brayden Armstrong and Zane Kik. 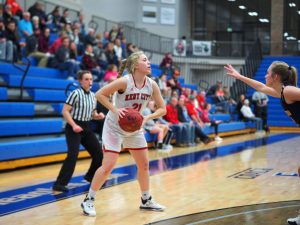 Varsity Girls Basketball vs. Morley Stanwood
Saturday, January 11, 2020 @ 4:30 p.m.
Any time Kent City welcomes their conference arch-nemesis Morley Stanwood to town, it is always a must see. This year’s match-up is shaping up to be extra special as both teams enter this first meeting with undefeated records. The Eagles are 6-0 and will play again on Tuesday at Grand River Prep in Kentwood, where they should have no problems. Saturday will be the Mohawks’ first game since Friday, December 20 when they crushed Holton 59-14. Morley Stanwood (6-0) has not faced anyone like Kent City, in fact, they have yet to beat anyone with a winning record. Kent City’s opponents have not fared much better, as the only victory over a team with a winning record came in their last game against Kalamazoo Christian (4-2) at Cornerstone University, a 79-33 drubbing of the Comets. The Mohawks are the only team in league to defeat Kent City since the Eagles’ first year in the CSAA Silver, that victory came on January 22, 2016 in the Nest, a 55-41 Mohawk victory. It is highly likely that these two rivals will play three times this year, twice during the regular season and again in the District Finals which will be hosted in the Nest. The winner of that game will travel to, you guessed it, Morley Stanwood for Regionals. 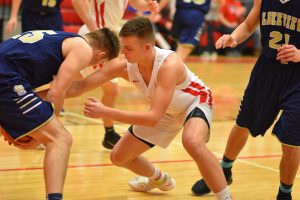 Varsity Boys Basketball vs. Morley Stanwood
Saturday, January 11, 2020 @ 6:00 p.m.
Over the past four seasons Kent City and Morley Stanwood have finished in first or second place in the CSAA Silver in boys basketball, with each team capturing two league titles. It started in 2015-2016 when Kent City won the league championship, followed by Morley Stanwood in 2016-2017, the Eagles and their perfect regular season in 2017-2018, and the Mohawks with an 18-2 record last year. Morley Stanwood is off to another great start in 2019-2020 with 4-0 record, while Kent City is close behind with a 3-1 mark.   The Eagles will travel to the Grand River Prep on Tuesday where they will have a tough game against the 4-1 Titans who the Eagles defeated in overtime last season.   The Mohawks have a busy week with a game at Central Montcalm on Tuesday and then a home game against Newaygo on Wednesday.   Kent City enters this game as the under dog against a Morley Stanwood squad returning several key players from last year’s team who beat Kent City by 11 and 12 respectively.  For a Kent City victory, it will take a big game from the supporting cast as #10 will garner a lot of attention, although he has shown a little extra attention won’t stop him.