Here is a quick pop quiz for you . . . how many schools in Michigan won a first round playoff football game, sent their girls cross country team to the state finals, and won a Michigan Competing Band Association state championship all in just two days time?   The answer is one.   Who is that school?   If you thought the answer was going to be anyone other than Kent City then you better brush up on your test taking skills.   It was a huge weekend for Kent City, demonstrating again the many opportunities our students and student-athletes enjoy at our school.  It is no secret why either, our student-athletes have a strong work ethic and are able to be involved in several activities.

For instance, three of our students competed in two state finals on Saturday, running at Michigan International Speedway in the morning and then driving to Detroit to compete at Ford Field.   Or how about the two football players who suited up on Friday night in the MHSAA playoffs and have played for the Kent City Marching Eagles at halftime (and at the State Finals) throughout the season.   It is not just these two teams either, the varsity sideline cheer team, the varsity boys soccer team, and the varsity volleyball team also have student-athletes who participate in athletics and band.

This is only one example of the “dual activities” that the students and student athletes are participating at Kent City.   In fact it is happening all of the time, whether it be athletics, band, drama, quiz bowl . . .  and the list goes on.  You will find students involved in many activities at Kent City and at an extremely high level.    It is a great example of the small school advantage — the Kent City advantage — that gives students the opportunity to get a well-rounded education with some super extracurricular activities!

The varsity volleyball team completed their regular season on the road at Holton on Wednesday.  Kent City came away with a straight set victory over the Red Devils, 25-13, 25-14, and 25-19.  The win improves the Eagle’s record to 31-13-3  and 6-4 in the CSAA Silver which is good enough for a third place finish behind Hesperia (2nd place) and state ranked, conference arch-nemesis Morley Stanwood (1st place) .

Kent City’s football team hosted their fourth consecutive home, opening round playoff game on Friday, defeating Grand Rapids Northpointe Christian 14-8.  The Eagles scored on their first possession of the game thanks to great field position from the punt return team, and kept the Mustangs from scoring right before the end of the first half, even though they had 1st and goal from the four yard line.  In the second half, Kent City scored on their opening possession and then used a clock killing drive to seal the game following Northpointe’s only score with just over four minutes remaining.   Max Hudson rushed for 79 yards with two touchdowns (1 rushing and 1 receiving) and Bradley Brooks had two interceptions. 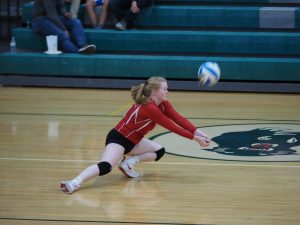 Varsity Volleyball @ Morley Stanwood (vs. Ravenna)
Wednesday, November 6, 2019 @ 6:00 p.m.
The varsity volleyball team will begin their post-season journey on Wednesday at Morley Stanwood, where the Eagles will play our neighbors to the west.   Kent City has played and defeated the Bulldogs in their only meeting this year at a quad at Covenant Christian.  In the first set, Kent City lost 23-25, before rebounding in the second set 25-17.  In the final set Kent City earned the win, 15-13.  Kent City is hoping to be at full strength this week as they have missed Hannah Vanderlught the past couple of weeks due to injury.   The winner of Wednesday’s game will most likely face off with conference arch-nemesis Morley Stanwood who are the heavy favorites to advance on the other side of the bracket.  Kent City has not advanced to the District Finals since 2016 when they won their first District title since 2000. 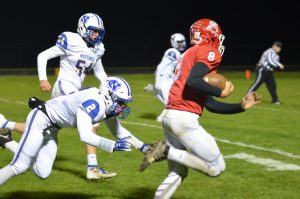 Varsity Football @ Pewamo Westphalia (District Finals) (Game Site May Change)
Friday, November 8, 2019 @ 7:00 p.m.
Kent City will travel to Pewamo Westphalia on Friday for the MHSAA District Finals against the 2nd ranked Pirates (10-0).  Friday’s game will be the latest into the fall Kent City has played since 1966 when they played on November 11 against our neighbors to the west.  At that time, there were no playoffs and the regular season started much later than it does now.  For instance, Kent City opened up with Gobles in 1966 on September 17.   This year, the Eagles had three games under their belt by then, with the Lakeview game only days away (September 20).  Part of the later date is because of how this year’s calendar falls (late Thanksgiving), but advancing into the sweet sixteen also is part of the late game.  Kent City has advanced to the District Finals three other times (2002, 2016, & 2017), failing to bring home a title in all three appearances.   The Pirates have a storied history in football, qualifying for the playoffs 22 times including 21 times in the last 22 years and eight consecutive district championships.  Due to field conditions, Pewamo Westphalia is considering moving the game to a neutral site.  We hope to have tickets for sale in the high school office by mid-week.