For the three  fall sports teams remaining, this is a big week.  The varsity boys soccer team and varsity girls golf team have completed their 2019 campaigns, leaving the varsity football, varsity volleyball and varsity cross country teams.  This is the final week of the regular season for football, while volleyball has one more week, and cross country heads into the post-season on Saturday.   With that being said, the Eagles have a lot left to accomplish before we close the books on the fall.

The varsity football team qualified for the MHSAA Playoffs for the fourth consecutive season, a new school record.   Kent City defeated Calvin Christian on the road 62-14 behind a four touchdown performance by senior Dolan Bair.  Kent City jumped out to a 35-0 lead by the end of the first quarter and 48-6 at the conclusion of the first half.   The Eagles gained 459 yards, compared to only 112 for Calvin Christian.   The win improves the team’s record to 6-2 overall with one regular season game remaining this Friday at Grant.

On Saturday, the varsity volleyball team finished 3-2 at the Sparta Invitational.   Kent City picked up two wins in pool play by defeating Comstock Park and Kalamazoo Hackett and losing to Sparta.  During the tournament, Kent City defeated Fremont in the quarterfinals before losing to Sparta again in the tournament semi-finals.   The three wins improves Kent City’s record to 28-11-3 overall on the season including a perfect record vs. CSAA Gold teams!

A shout out to the Kent City Marching Eagles who recorded back to back 1st place finishes the past two weekends at Belding and Jenison.   Several of our student-athletes are also members of the Marching Eagles who will compete at Sparta this coming weekend and then travel to Ford Field in Detroit for the state finals.   In addition to their first place finish, Kent City earned three caption awards: Best Music, Best Visuals, and Best General Effect!

In case you missed it, we currently have two BSN shops open on our website.  If you are looking for equipment for the fast approaching winter sports season check out these great deals in our winter team shop:

If you are looking for Kent City Athletic apparel, check out the following link: 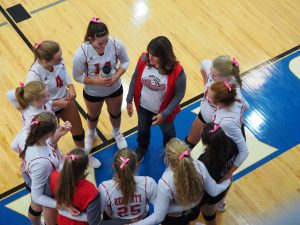 Varsity Volleyball @ Hesperia
Wednesday, October 15, 2019 @ 7:00 p.m.
The varsity volleyball team still has an opportunity to move up in the league standings with a victory on the road on Wednesday at Hesperia.   In their first meeting at Kent City, Hesperia overpowered the Eagles, winning in three straight sets: 6-25, 13-25, and 20-25.  Since that time, Kent City has steadily improved and will be ready for the Panthers this time around.  A win against Hesperia would put the Eagles and Panthers in a two way tie in the league race for second place.  This would be the highest finish by Kent City in volleyball since they won the conference title in 2016.   With a majority of the team in the 11th grade this year, a 2nd place finish may give the team confidence as we near the off-season. 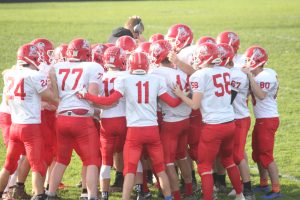 Varsity Football @ Grant
Friday, October 25, 2019 @ 7:00 p.m.
Kent City will travel to Grant in a rivalry game that was rekindled during the 2018 season.  Kent City won last year’s match-up 26-6, the first time this pair met since 2001 and 2002 (both games won by the Tigers).  Friday’s game will be the 52nd meeting since 1950, a series the Tigers lead 30-20-1.   Both teams have already qualified for the playoffs with identical records (6-2).  The one common opponent is Newaygo, who Kent Cit defeated 21-14, while the Tigers beat the Lions 27-7.  Grant has played great defense throughout the 2019 season, only allowing 74 points on the season.   To decide this rivalry, it will come down to offensive execution, which will also aid each team’s defense. 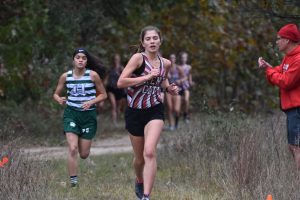 Varsity Cross Country @ MHSAA Regionals (Allendale)
Saturday, October 26, 2019 @ 10:00 a.m.
The postseason begins for the boys and girls varsity cross country teams as they travel to their traditional regional site on the campus of Allendale High School.   To qualify for the State Finals at Michigan International Speedway, student-athletes need to earn a medal (top 15) or be on a team placing in the top three.   Kent City’s boys and girls have qualified for the finals as a team for the past two seasons (2017 and 2018).  Expect the girls to make it three seasons in a row behind junior Layla Martini who is ranked second based on her season best time, but if she can find her kick from her sophomore season, she could come home as regional champion.  Look for Alyeska Linsely and Abby Ignasiak to make a run at a medal as well for the girls.  The boys do not appear to have enough fire power to qualify for a third consecutive season.  Senior Nick Flegel ran his fastest time of the 2019 season last Tuesday and has a great chance at qualifying individually.   Junior Ryan Wheeler is also capable of a top 15 finish and a trip to the State Finals.