Although we had to make some adjustments, Homecoming 2019 turned out to be great week for Kent City High School. A testament to our students, the amount of enthusiasm and creativeness throughout the week was admirable. Students did a great job with the dress up days, competed in the spirit games, and turned out in droves to this year’s dance. There were over 250 students in attendance! It was also exciting to see the turn-out for the Homecoming Celebration following the game where we recognized our fall student-athletes and crowned our king and queen. It was all around a Great Week to be an Eagle!

On top of all of that, Kent City’s varsity football team did not disappoint in the Homecoming game vs. Hesperia. The Eagles raced out to a 28-0 halftime lead, and then enacted a running clock in the 2nd half with 14 more points for a final score of 42-0. Kent City’s defense held the Panthers to just 46 yards, including -36 yards rushing. Offensively, Kent City racked up 294 yards rushing and 77 yards passing for 371 total yards. Casen Armstrong lead all rushers with 92 yards followed closely by Max Hudson with 85 yards, 3 touchdowns, and a 55 yard touchdown reception.

The varsity volleyball team traveled to White Cloud on Wednesday and easily defeated the Indians this time around in three straight sets. In their first meeting, Kent City jumped out to a 2-0 lead before White Cloud captured the next two sets forcing a fifth set that Kent City won. Not this time, Kent City put the Indians away 25=18, 25-17, and 25-23. Kent City is in third place in the CSAA Silver with four weeks remaining in the regular season.

On Monday, the varsity girls golf team picked up their second victory of the season, defeating West Michigan Christian 255-258. The Carr sisters lead the way, each shooting a 59. Also scoring for Kent City was Kierston Moorman (68) and Peytin Brake (69). Then on Tuesday, Kent City was nine holes into the CSAA Bronze Championship at the Falls before the event was postponed by Mother Nature. The girls will finish on Friday, October 11.

On Saturday, the varsity cross country teams traveled south to one of the biggest and most prestigious races held in Michigan, the Portage Invitational. Kent City’s girls finished in 7th place out of 42 teams. Senior Layla Martini raced to an 8th place finish while sophomore Alyeska Linsely came home in 34th place, also earning a medal. 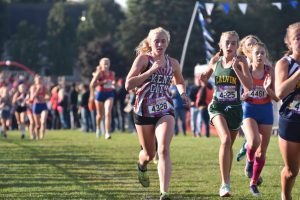 Varsity Cross Country @ CSAA Silver Jamboree (Long Lake Park)
Monday, October 7, 2019 @ 4:50 p.m.
This is a re-run from last week. The varsity cross country team will have home course advantage on Monday as the CSAA Silver comes to Long Lake Park for the third leg of their four jamboree season.  Kent City’s girls have a comfortable lead on the other five teams in the conference with seven runners in position to earn all-conference honors; a pretty remarkable feat considering that is half of the 14 all-conference positions available in the CSAA Silver!  Layla Martini should cruise to another victory followed by Alyeska Linsley, and Abby Ignasiak.   Others in position for all-conference include Elizabeth Sible, Emily Lantzer, Kierra Flegel, and Carley Denhof.   The boys team could secure at least a share of the conference championship on Tuesday if they can produce a repeat performance the second CSAA Jamboree where they easily outdistanced White Cloud.   Nick Flegel and Ryan Wheeler lead the boys’ team with other all-conference hopefuls Thomas Swanson, Casen Armstrong, Daniel Loew, and Brock Hearth also in good position for post-season honors. 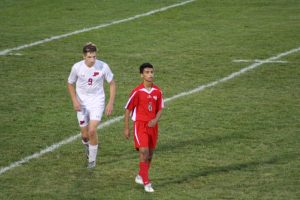 Varsity Boys Soccer @ MHSAA Pre-District (@ Pentwater)
Thursday, October 10, 2019 @ 4:30 p.m.
The varsity boys soccer team will start their postseason journey on Thursday as they travel to Pentwater for the MHSAA Pre-District game against the Falcons. Kent City should have the upper hand in this one, as there are three common opponents on Pentwater’s schedule: Walkerville, Montague, and Newaygo. Kent City defeated Walkerville 5-0 early in the season whereas Pentwater lost 6-1. Both teams fell to Montague, Kent City 5-4 and Pentwater 10-2. Newaygo was too much for both squads as the Lions defeated Kent City by mercy twice (8-0 and 10-2) and Pentwater once (8-0). The winner of this game will travel to McBain Northern Christian on Tuesday, October 15 for a 5:00 p.m. start against the host school. In fact, if the Eagles play their cards right this week (Monday vs. Hart, Tuesday @ Reed City, and Thursday @ Pentwater), they could be in position in the MHSAA District Semi-Final game to tie the school record for wins (8) in a season. 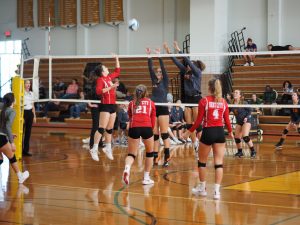 6th Annual Kent City Dig Pink Invitational
Saturday, October 12, 2019 @ 9:00 a.m.
For the 6th consecutive season Kent City will be hosting their Dig Pink Invitational. An event that is much more than just volleyball, the Kent City Volleyball Program has raised more than $55,000 for the Side-Out Foundation, an organization whose mission is to eradicate breast cancer through awareness and research. The Eagles are at it again, completing several fundraisers to raise more money this year for this worthy cause, including a t-shirt sale. In addition to raising money, the players and coaches each dedicate their performance to someone who is battling cancer or has lost their battle to this terrible disease. If you have never been, this is an event you need to check out. The volleyball action is great too, with eight teams vying for this year’s tournament championship. Grant has won the last two titles and are back again in 2019. Kent City has not won the title since the tournaments first year in 2014, but already have two tournament championships under their belt with championships at Lakeview and Muskegon Catholic Central. Make sure you wear pink and join us for this special event in the Nest on Saturday!