Growing up in a small town certainly has its advantages.   Friday night’s football game was a prime example of the tight-knit community we are living, working, and growing up in.   Prior to kickoff the varsity football team sponsored the 5th annual Military Appreciation Night.  Both teams greeted the military men and women before our pre-game ceremonies began and walked out with them together.  Then the two teams did battle on the field, with Kent City getting the better of Lakeview to the pleasure of a large home crowd.   Following the game, the lights went out as the varsity football team, family, friends and community sent lanterns into the night sky to honor the memory of Easton Kutzli.  It was a special night, in a special place that will not soon be forgotten by anyone who was there.

The varsity football team raced to a 35-0 lead in the 1st half, invoking a running clock in the 2nd half, where they scored one more touchdown to post a 42-0 victory over Lakeview.   Kent City’s defense turned the Wildcats over three times with two fumble recoveries and one interception.   Jayden Williams had a great night returning a punt for a touchdown, making an acrobatic interception, and getting in on 8 tackles.   Max Hudson lead the offensive attack with 108 yards and two touchdowns.

On Saturday, the varsity volleyball team traveled to the Muskegon Oakridge Tournament and finished the day with a 3-2-1 record.  Kent City opened up the day the day by tying Ludington 1-1.  Then Kent City easily defeated Algoma Christian and slipped by Mason County Central before losing to Muskegon Oakridge (0-2).  In their final match in pool play, Kent City defeated Muskegon Orchard View, earning the team the #3 seed.  In the first round, Kent City faced off with Muskegon Oakridge once again, losing to the Blue and White Eagles 2-0.

The varsity soccer team traveled to Lakeview on Monday to take on the Wildcats.  Kent City was down 2-1 late in the game when they were awarded a penalty kick with only seconds remaining.  Abel Diaz scored the tying goal and Kent City came away with a 2-2 tie.

Finally, the varsity girls golf team finished in sixth place in their CSAA Bronze Jamboree at Whitefish Lake Golf Course on Tuesday.  Kent City continues to improve and has two sisters with their sights set on All-Conference honors.  Senior Joan Carr and sister Michelle Carr are both in position for honorable mention all-conference with only the CSAA Bronze championships happening next week at the Falls Golf Course. 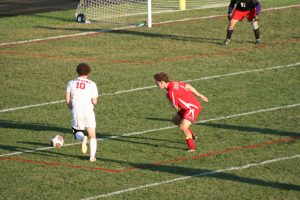 Varsity Boys’ Soccer @ Newaygo
Tuesday, September 24, 2019 @ 4:30 p.m.
This is a big week for the Eagles as the CSAA Bronze regular season comes to close and we find out where we will play in the inaugural CSAA Bronze Soccer Tournament beginning next Monday, September 30.   Currently Kent City is in 6th place in the nine team conference, with two games remaining.   On Tuesday, Kent City will travel to Newaygo to take on the first place Lions.  Then on Thursday, Kent City will welcome the 4th place Tri-County Vikings (4-2) to Ward Memorial Field for their final regular season CSAA Bronze game of the season.  Beating both of these teams would really shake up the conference standings before the tournament, but would only move Kent City up to 5th place.  Therefore, Kent City will start the tournament on the road next week. 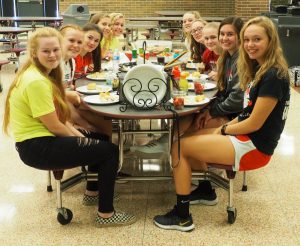 Varsity Volleyball @ Covenant Christian Quad
Thursday, September 26, 2019 @ 5:00 p.m.
An annual tradition, Kent City will travel to Grand Rapid Covenant Christian for a varsity volleyball quad featuring two traditional class C power houses in Ravenna and Covenant Christian as well as neighboring class B Sparta.  The Eagles have played and defeated the Spartans this season (WMVOA Scholarship Tournament) but have not played the Chargers or the Bulldogs.   This will be great opportunity to get a look at their first round opponent in the MHSAA post-season as Ravenna and Kent City will square off at Morley Stanwood in the post-season. 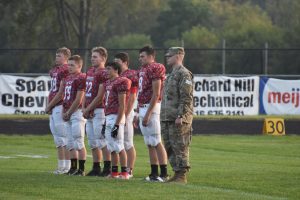 Varsity Football vs. Morley Stanwood (Youth Football Night)
Friday, September 27, 2019 @ 7:00 p.m.
Regardless of the sport, this game is always circled on the calendar prior to the season even beginning.   Both teams have been very successful as of late with Morley Stanwood qualifying for the playoffs for the last five seasons, while Kent City has been in the post-season the previous three seasons.   In fact, Kent City and Morley Stanwood met in the 2017 post-season, a game the Eagles won 31-6.  Kent City’s string of conference championships also began with a tie in 2016 with the Mohawks atop the CSAA Silver conference.   It is a new year and Morley Stanwood will enter Friday’s game after a week off thanks to Holton not fielding a varsity football team.  The forfeit win improves the Mohawk’s record to 2-2 overall, with their two losses coming to two teams with a combined 8-0 record (Central Montcalm & Hopkins).   Kent City is 3-1 on the season with their only loss to undefeated Orchard View (4-0).   To win on Friday night, the Eagles will have to somehow contain Morley Stanwood’s stable of explosive running backs, including a talented quarterback.