Welcome to Fast Five, where you can get to know a Kent City athlete or coach through just five questions! For our first edition, we talked to Eagle Senior Jared Lucht. Jared is an offensive guard and linebacker for the Kent City Varsity Football team. In the spring, he laces up the cleats again to play baseball for the Eagles. This summer, Lucht attended basic training in Missouri to begin his path toward becoming a U.S. Army Military Police officer. 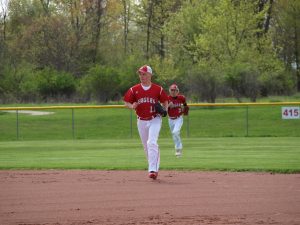 1. What was your favorite show growing up?

“My favorite show…would probably have to be the Suite Life of Zack and Cody.”

“Probably to visit Alaska. Yeah. I think that would be pretty cool. I just wanna see the state and the towns. It sounds like a really cool place.”

“My favorite food has gotta be tacos. I love Taco Tuesday.”

4. What are you looking forward to about the rest of your senior year of football?

“Just bonding with the team even more and having fun. Hopefully winning some more games as well.”

5. As someone who as already began a path toward a future in the armed forces, what does the annual football Military Appreciation game mean to you?

“The military appreciation game means a lot. I think it does for everyone in the community. It’s just good seeing the veterans from the [Grand Rapids Home for Veterans] and from all around Kent City come out and support our team. It’s fun seeing the smiles on the faces of the civilians and the veterans while they’re talking to each other. The veterans are always sharing stories, which is really cool.”

Kent City will take on Lakeview on Friday, September 20 at Ward Memorial Field in the fifth annual Military Appreciation Game.  All active duty military personnel and veterans will be admitted free into the game.  Prior to kickoff we will be honoring our nation’s heroes during our pre-game festivities.   For those who would like to be a part of this year’s ceremony, we will begin lining up at the gate by the concessions at 6:40 p.m.   Kickoff is scheduled for 7:00 p.m.