Before Rock Allen headed to Mt. Pleasant to attend Central Michigan University, and before he began his college playing and coaching career for the Chippewas basketball team, he roamed the halls and the fields of play at Kent City High School from 2008-2012. Allen competed in Varsity Football, Basketball, and Baseball in his time as an Eagle. He was the only male in his class to be a three-sport athlete in all four years of high school. 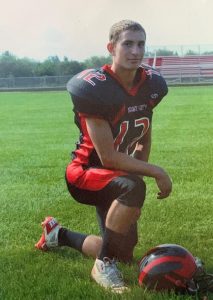 Rock was a member of the 2012 District Champion Baseball team, was a two-time captain in each varsity sport that he was a part of, and received the OK Silver Athlete of the Year award after his Senior seasons.

Nowadays, Rock is going into his first year as an assistant coach for Concordia University’s Basketball team in Portland, Oregon. Allen left his assistant coaching position at the University of St. Francis in Joliet, Illinois this past year to coach for the Cavaliers this upcoming season. Before departing, however, he helped lead the St. Francis Fighting Saints to a conference tournament championship as well as the Sweet 16 of the NAIA Tournament, defeating No. 1 seed Oklahoma Wesleyan in the first round.

To read Allen’s Bio at Concordia University, use the following link:

Allen on what his time as an athlete taught him about coaching: “My time as an athlete made me realize how much I love sports, and especially basketball! I knew at a very young age that I wanted to be a coach and work in sports. If you ask anyone who I grew up with at Kent City what I would be doing now, I bet a lot would say coaching. As an athlete I was not always the most athletic and had to work a little harder and play a little smarter to be successful on the field and court. I always tried to be a leader of our teams and an extension of the coaches on the field. Little did I know that I was learning on the field how to be a coach. The other things that I was able to learn about as an athlete that translates to coaching is work ethic and sacrifice.  I have learned that if you work hard at something and put everything you have into it, you are going to be successful. My time as an athlete at Kent City, playing for my dad in youth sports and playing for Coach Boyd, Coach Crane, Coach Thompson, and Coach Larson, I was able to learn about what kind of work and sacrifice you need to put in to be successful. This translates to coaching in a major way! In coaching if you don’t have a drive to be great and aren’t willing to make sacrifices for your team, the team will not be successful.”

One can only assume that it will be just a matter of time until Rock is given his first opportunity to be a head coach. He has done a fantastic job of taking the lessons he learned as an athlete in high school and college and translating them over into the world of coaching. Allen is great example of someone dedicating themselves to what they want to do and working hard to achieve it, and he has demonstrated that on the field and court as well as on the sideline.