It should come as no surprise that the weather cancelled games on Saturday and pushed our schedule into another week. This year’s weather as a whole has been anything but cooperative. Every season (fall, winter, spring) has seen cancellations due to weather. The weather has not stopped us from having a great year though. There have been countless successes in 2018-2019, including some as recent as yesterday.

Seniors Giovanni Weeks and Lauren Freeland put on a show when they were able to get on the track at Saturday’s MHSAA State Finals at Jenison High School. Weeks earned all state in all four of his events including two state championships in the 200 meter dash (21.93 — school record) and long jump (21’5.25″), a second place finish in the 100 meter dash (11.09), and a fourth place finish in 4×100 meter relay. In that race, Weeks teamed up with Jayden Williams, Dolan Bair, and Will Wright to break their own school record (44.04). Overall, the boys’ team finished in 5th place.

Lauren Freeland set school records in three of her four events, moving up one spot each time she took the track until she became a state champion in her final high school race of her career and the final race of the night. Freeland took the baton in the 4×400 meter relay team trailing Mason County Central by a step or two and turned a lap at 56.3 to propel her team to a 1st place finish and school record by nearly five seconds (4:04.15). Kent City used Taryn Preston, Kylie Brown, and Carlie Denhof to better their time by nearly 10 seconds from Regionals at Saugatuck. Earlier in the day, Freeland broke her own records in the 1600 meter run (4:51.75) for a third place finish and again the 800 meter run (2:14.37) for a second place finish. Sophomore Layla Martini earned all-state honors with her 7th place finish in the 3200 meter run (11:27.90), while freshman Taryn Preston also earned all-state honors with a 7th place finish in the 300 meter hurdles (48.09). The girls finished in 6th place overall.

The varsity softball team picked up two victories over Fremont on Wednesday. Sophomore Alyssa Larson was credited with both wins from the circle. In the first game, Kent City defeated the Packers 7-4. Freshman Taryn Preston hit a first inning grand slam, her first home run as a varsity player. In game two, Kent City came from behind to secure a 14-11 win. Sophomore Kenzie Bowers lead the team offensively with a single, two doubles, and triple. 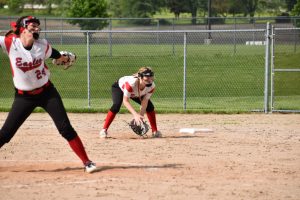 Well we are still awaiting our first District game for the varsity softball team. It appears it will happen on Monday against North Muskegon who defeated our neighbors to the west 16-12 last Tuesday. The Norse can sure hit the ball so Kent City’s defense will need to be up to the task. However, the Eagles certainly can score runs as well. Kent City will also have home field advantage, which can not hurt. With a victory, Kent City will advance to the District Finals for the tenth consecutive season! That’s right, Kent City has found themselves in the District Finals in nine out of the past nine seasons, including three District championships. Last year, Kent City lost to Central Montcalm 8-0 in the District Final, the Hornets advanced to the quarterfinals. If the Eagles can make it 10 in a row, they would face another West Michigan Conference team, Montague. The Wildcats easily defeated West Michigan Christian on Tuesday, 13-0 and then won a rain shortened game on Saturday 7-0. A regional semi-finalist in 2018, Montague features a balanced line-up with only four seniors on the team. They have a 14-14 record on the season including an 8-5 mark in the always tough West Michigan Conference.
Here is this week’s schedule: