On Wednesday, I did something I have never done before, I attended the Meijer West Michigan All-Star Meet at Reeths Puffer High School in Muskegon.   I also made my three kids attend as well, because like I told them as we were piling into our car, this will be the last chance you will have to see Lauren Freeland and Giovanni Weeks compete for Kent City (we were/are unable to attend any other meets).   I am glad I made them attend.

While I waited for the presentation of the Rich Tompkins Multi-Sports Award ceremony, I watched Giovanni Weeks come from behind at the tape to win the 100 meter dash.  I also saw Weeks pick up a 1st place medal for his 21’11” long jump.   Then Larry Merx from from the Michigan High School Coaches Association presented Lauren Freeland with a plaque for being chosen as the Class C Multi-Sport Athlete of the Year.   On my way off the infield, I spoke to a local reporter and a friend from another school.  I heard about the other girls who were running the 1600 meter and how it would be a great race — very little was said about Lauren Freeland.

When the race started Lauren Freeland was on a mission.   From my vantage point on the first turn, you could see it in her body language and facial expression.  Her non-verbals reeked of dominance.  On the bell lap, the non-verbals of the other two front-runners quickly turned to panic when Freeland showed them she was just getting started.   The senior motored around the track beating two of the state’s best and resetting her own school record by over four seconds (4:52.78).   It was amazing.

At the Mitchell Creek Meet of Champions in Big Rapids, junior Dolan Bair was named the Male Athlete of the Meet after he won four events on the night.   Bair won the 300 meter hurdles with a personal best time, the 110 meter hurdles, and was on the winning 4×100 meter relay and 4×200 meter relay teams.   In the 4×100 meter relay, Bair teamed up with Mateus Mello, Spencer Hartley, and Will Wright, and then in the 4×200 meter relay Bair and Giovanni Weeks, Jayden Williams, and Will Wright set a new meet record with their 1st place finish.  Giovanni Weeks was the other Kent City first place finisher with a new school record in the 400 meter dash (49.99).

With two wins at Morley Stanwood on Monday, Kent City’s varsity softball team secured a 2nd place CSAA Silver finish for the third consecutive season.  The Eagles finish 13-7 in the CSAA Silver and currently are 18-10 overall with one regular season game remaining.   In game one, conference arch-nemesis Morley Stanwood forced seven innings for the first time this season, but the Eagles still prevailed 14-5.  The second game was more typical of the Eagles, as Kent City defeated the Mohawks 22-1 in only three innings.   Alyssa Larson struck out 11 in game one while Mackenzie Mortensen sat down five in game two.  Janelle Krueger had seven hits (all singles) in two games, while Kenzie Bowers added a three run homer, a double, and two singles in the doubleheader. 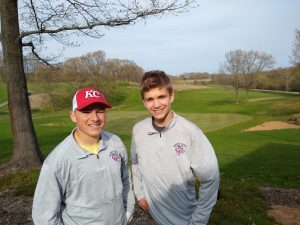 Varsity Boys Golf @ MHSAA Regionals (Pigeon Creek Golf Course)
Wednesday, May 29 @ 9:00 a.m.
On Wednesday, the varsity boys golf team will look to advance their first golfer to the MHSAA State Finals since Oliver Shepardson made it in 2011.   Since that time, the MHSAA has changed the format of the post-season tournament, eliminating the District round following the 2016 season.  That was the last time an Eagle advanced in the tournament, senior Chase Freeland finished in 5th place at the MHSAA Districts to advance to the MHSAA Regionals.   With today’s format, Kent City will need to finish in the top three with the combined score of their top four golfers, or individually, a golfer can advance by being in the top three of the golfers who did not qualify with a team.  Last year, Kent City was towards the back of the pack for team (14th out of 19 teams) and had no one in the vicinity of the 78 cut score.   However, these standards will fluctuate based on the strength of the 2019 teams and individuals.   The best round by any golfer for Kent City this year has been an 86, meaning the team/individuals are going to have to play the round of their lives to qualify.  Kent City previewed the course on Friday and will be ready to give it their best shot on Wednesday! 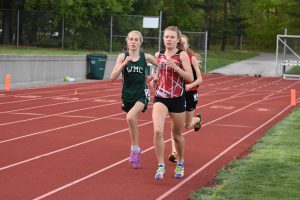 Varsity Track & Field @ MHSAA State Finals (Jenison High School)
Saturday, June 1 @ 9:30 a.m.
For the first time in 19 years, the Division 3 MHSAA State Track and Field Finals will not be held at Comstock Park High School.  Before any of this year’s state qualifiers were born, the “Class C” finals were held at Saginaw High School on June 5, 1999.   At that time, the location seemed to move from one school to the next until it remained at Comstock Park starting in 2000.  This year’s finals will remain in west Michigan at Jenison High School.  The threshold for all-state is a top eight finish.   Last year, Kent City came away with seven all-state performances between the boys and girls teams, including one state champion (Giovanni Weeks — 200 meter dash).   On Saturday, Kent City will be in line for the same number of all-state performers — give or take.  It is very hard to predict because there are so many variables involved.  With favorable weather on Saturday though, I am confident that at least two more school records will be eclipsed and Kent City will come home with two, perhaps three state champions.  Our teams are battle tested with several chances to square off with the best of the best in the state, so we can just relax and WIN! 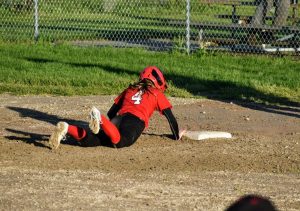 Varsity Baseball & Softball MHSAA Districts Semi-Finals
Saturday, June 1 @ 10:00 a.m. (Baseball) and 12:00 p.m. (Softball)
Kent City will play host to the 2019 MHSAA Baseball and Softball Districts which officially begin on Tuesday.   The Eagles drew a first round bye in the tournament, meaning, they advance to the District Semi-Finals on Saturday.  On Tuesday, four schools will travel to Kent City to play in the MHSAA Pre-District round and determine who will move onto Saturday’s semi-final and final rounds.  Both Kent City teams await the winner of Ravenna and North Muskegon.  Neither the softball or baseball teams have faced the Norsemen or the Bulldogs this season.   For softball, Kent City will most likely face their neighbors to the west in the District Semi-Finals and with a win, would play Montague in the District Finals.  The Wildcats narrowly defeated Ravenna in the District Finals last season 7-6 and then played in the Regional Semi-Finals at Kent City losing to Delton Kellogg 4-1.   In baseball, the same scenario should present itself, with a match-up with the Bulldogs first thing on Saturday, and then most likely Montague.  Both Montague and Newaygo played at Kent City last year in the MHSAA Regionals where the Wildcats won the championship, advancing to the quarterfinals.  From top to bottom, the baseball District is easily one of the best in Class C in Michigan.   Several of the teams coming this week could win a District championship elsewhere.  Since it is an MHSAA event, we will be charging admission to the games.  All tickets will cost $6.00 — no passes will be accepted.