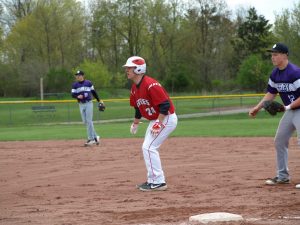 After picking up a couple wins on Monday night at White Cloud, the baseball team traveled to Holton on Tuesday night looking for a couple more wins.  The Eagles got things going right away in Game 1 as they scored 5 runs in the top of the first inning.  Eli Carlson, Brendan Boyd, Nick Brummel, Rylan Kerwin, and Casey Carew all had base hits in the first.  Holton would battle back to score 4 in the bottom of the inning to make the score 5-4.  Kent City would add 1 run in the second inning and 2 more in the fifth to take an 8-5 lead into the bottom of the seventh.  That inning would not go as planned for the Eagles as a couple miscues by Kent City, and a couple of hits by Holton would lead to the 9-8 walk-off win by the Red Devils.  Boyd would go 3 for 4 at the plate as Carlson and Bryant Fahling would add 2 hits apiece for the Eagles.  Carew and Boyd would combine to pitch Game 1. 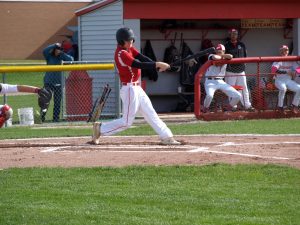 Game 2 would be a back and forth battle between the two teams and Holton would end up earning the season sweep of the Eagles by the score of 10-7.  Offensively the Eagles were lead by Bryant Fahling who went 2 for 4 with 2 Doubles  and 1 RBI and Brendan Boyd who was 2 for 3 with 2 RBI’s.

Kent City will be back in action this Friday as they will travel to Lakeview for a Doubleheader.  First pitch is scheduled at 4:00 pm. 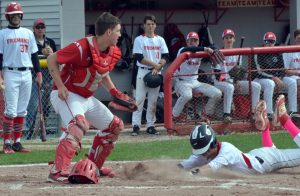