I want to wish all of the moms out there a happy Mother’s Day.   Nobody plays a bigger role in the world of athletics than mom’s.   I know I owe my love of sports to my own mom.  Not only did she support me and my sisters in all of our athletic endeavors, she also took a great interest in sports in general.   This was passed down from her own mother who also loved watching sports.  My grandma especially enjoyed any team from Detroit.  She could tell you every detail about every player for the Pistons, Tigers, Red Wings, and Lions; which to a kid, was pretty cool to be able to talk to grandma about the things I was interested in.  This love of sports continued with my mom at home growing up, and still today.  She takes her sports seriously whether it be the future of Matthew Stafford with the Lions or a call at the minors little league baseball game at Hawley field.   Although I do not always agree with her opinions when it comes to sports, I do appreciate her passion when it comes to athletics.  Thank you Mom for your love of sports and to all of the moms out there for supporting your own children/grandchildren as they participate in athletics!

Kent City’s varsity softball team has found their stride as of late, stringing together nine wins in a row, including six in last week.   On Tuesday, Kent City welcomed conference arch-nemesis Morley Stanwood to town and were anything but good hosts, thrashing the Mohawks in two games 16-1 and 15-0.  Alyssa Larson picked up the win in game one facing only 11 batters, striking out four.   Kenzie Bowers led Kent City from the plate with two doubles and four runs batted in.    In game two, Lauren Schnicke set the tone from the circle, also facing only 11 batters while striking out three.   Nicole McCullough hit one to the fence but had to settle for a triple, while Alyssa Larson and Janelle Krueger each had two hits a piece.

On Thursday, the Eagles exacted revenge on Hesperia, who swept Kent City early in the season.  The Eagles chose to win in dramatic fashion in both games, coming from behind to beat the Panthers 5-4 and 9-8.  In game 1 the Eagles were down 4-2 in the bottom of the 7th when Alyssa Larson delivered a double to score Madelyn Ellicott and Kenzie Bowers.   Junior Mikayla Loew was the next batter and calmly hit a single to get Larson home and secure the Kent City victory.  In game two, Kent City found themselves down 8-3 at one point, before they started chipping away at the Panther lead.   Down by one (8-7) in the bottom of the seventh, Kennedy Campbell drove in the tying run and Madelyn Ellicott came through in the clutch hitting a fielder’s choice to score the game winner.

Then on Saturday, Kent City traveled to Kelloggsville for the Liz Jensen Memorial Tournament and came home as champions.  In game 1, Kent City easily dispersed of the host school, beating the Rockets 12-1 behind a great performance by Alyssa Larson who struck out 11 and only gave up one hit.   Janelle Krueger hit a solo home run in the effort, while cousin Alyssa Larson helped her own cause with a three run home run.   In the championship game between Kent City and Allegan, the Eagles had no problem with the Tigers with Mackenzie Mortensen in the circle.  The senior struck out 12 batters while Nicole McCullough added a home run.  Final score Kent City 14 Allegan 4.

The varsity boys golf team picked up a win over Grand Rapids Wellspring at the Mines on Wednesday.  In a two man scramble, Kent City’s Dylan Denhof and Jacob Sikorski, as well as Alec VanNorman and Dakota Stevens combined for a 72, 34 strokes better than the host Wolves.   The prior day, Kent City was at their 3rd CSAA Bronze Jamboree of the season at Katke Golf Course on the campus of Ferris State University.   Alec VanNorman became the third different Eagle to lead the squad this year in CSAA action with his 91.  Dylan Denhof shot a 97 to remain in the hunt for all-conference and R.J. Mortensen (105) and Paul Yates (115) rounded out the scoring for Kent City.  After three events, Kent City remains in 2nd place, well behind first place Big Rapids and 17 strokes ahead of 3rd place Fremont.

At Morley Stanwood, the final score was a little closer for the boys, but the Eagles pulled away from conference arch-nemesis Morley Stanwood for a 185-121 victory over the Mohawks and the rest of the conference.   Kent City won seven of 17 events on the night including 1st place finishes by Giovanni Weeks (100 & 200), Dolan Bair (300 hurdles), 4×800 m relay (Ryan Wheeler, Alex Russo, Nick Flegel, & Evan Jones), 4×200 m relay (Spencer Hartley, Carter Magoon, Mateus Mello, & Will Wright), and the 4×100 m relay (Dolan Bair, Jayden Williams, Giovanni Weeks, & Will Wright). 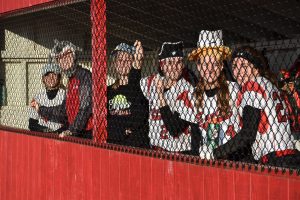 Varsity Softball @ Holton (Doubleheader)
Tuesday, May 14 @ 4:00 p.m.
On Tuesday, the varsity softball team will have one more crack at 1st place Holton.  In their first meeting, Kent City dropped both games to the Red Devils 0-6 and 3-10.   That doubleheader was the fourth and fifth losses in a five game losing streak for the Eagles.  Since then, Kent City has won nine consecutive games, including Saturday’s Liz Jensen Memorial Tournament at Kelloggsville.  The Eagles currently sit in third place in the CSAA Silver with an 8-5 record.   On Monday, Kent City travels to White Cloud again, to finish the season series with the Indians who have a one game lead on the Eagles with a 9-4 mark.  Kent City is 2-1 against White Cloud so far in 2019.  A victory in that make-up game and one or two wins over Holton would pretty much guarantee Kent City a second place CSAA Silver finish — which would be the third consecutive 2nd place finish to Holton for the Eagles. 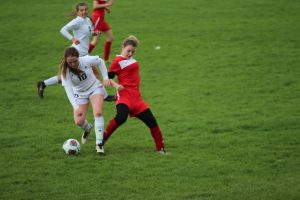 Varsity Girls Soccer vs. Carson City Crystal
Thursday, May 16 @ 6:00 p.m.
This could be a big week for the Kent City girls’ soccer team.  The Eagles play host to Newaygo on Monday and invite Lakeview back to Kent City on Wednesday, and close the week out with a non-league game vs. Carson City-Crystal.  Kent City has yet to play the 2-5-2 Lions this season, but all signs point to a competitive game.  Newaygo’s two wins this season came against Hart and Chippewa Hills.   Kent City fell to Chippewa Hills 4-0 earlier this season, but seem to be improving with each game.  On Wednesday, Kent City welcomes Lakeview back to Ward Memorial Field for their official CSAA Bronze match-up.   In the first game, Lakeview defeated Kent City 5-0.  Kent City will relish another crack at the Wildcats, especially since they will see them one more time this season when they travel to Lakeview for the first round of the MHSAA Districts.  Then on Thursday, Kent City welcomes Carson City Crystal to town, the one team Kent City defeated early in the season, 5-0.  All three varsity games are at home this week including two middle school/varsity double headers on Monday and Thursday. 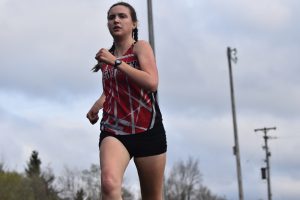 Varsity Track and Field @ MHSAA Regionals (Saugatuck)
Friday, May 17 @ 1:00 p.m.
The varsity track and field team will travel to Saugatuck for the MHSAA Regionals on Friday.   Both teams have several State Finals hopefuls.  Student-athletes can qualify two different ways; they can finish in 1st or 2nd at the Regional meet, or they can meet the qualifying standard for the event.  Several all-state athletes from 2018 are looking to make a return trip including last year’s 200m state champion and multi all-state finisher Giovanni Weeks for the boys and multi all-state finisher Lauren Freeland for the girls.  Those two have a chance to punch their ticket in four events for what will be their final appearance at the State Finals.   They may not be the only two with a chance of qualifying in four events, freshman Taryn Preston could pull it off too if she can muster a top two finish in the 100m hurdles.   One person standing in her way is teammate Zara Weber.   Weber has yet to match her PR from 2018 that she set at the MHSAA Regionals.    Overall the boys should qualify student-athletes in five different events, while the girls will send student-athletes in nine different events including some events with more than one qualifier.   The girls team will also make a run at regional championship trophy.