Well, spring sports are here.  All of our high school spring sports teams will begin their practices on Monday, although it will not be outside in spring weather, well maybe spring by Michigan standards.   Even though spring sports are starting, we still need to finish up on the winter season though, as the varsity girls basketball team has some unfinished business to attend to.

Kent City won their seventh District championship in their past nine appearances on Friday with a 59-31 victory over West Michigan Christian at Ravenna.  Kent City scored 20 points in each of the first two quarters behind a pressure defense that turned the Warriors over 16 times in the first half and took W.M.C. out of their game.  The Eagles led 40-17 at the half and extended that lead by the final buzzer by outscoring West Michigan Christian 19-13 in the second half.  Kenzie Bowers led the Eagles with 16 points, while Jenna Harrison added 13 points.

On Monday, Kent City easily defeated North Muskegon 65-26 to advance to the District Semi-Finals.  Kent City outscored the Norse in every quarter, including a 24-0 run in the first quarter that gave the Eagles a 29-5 advantage after trailing to start the game.   Kenzie Bowers led Kent City with 17 points, while Zara Weber added 13 points.   In the next game, Kent City played CSAA foe Holton for the third time this season.   During the course of the game, Kent City set a new MHSAA record for three point baskets made in one season.   Monroe St. Mary’s Catholic Central held the previous record of 237 set in 2004.  On Wednesday, senior Zara Weber (makes sense) hit the tying three point shot, and then fellow senior Janelle Krueger buried number 238 to set the new mark.  The Eagles easily bounced Holton from the tournament with a 55-13 victory.   Jenna Harrison led the way with 13 points. 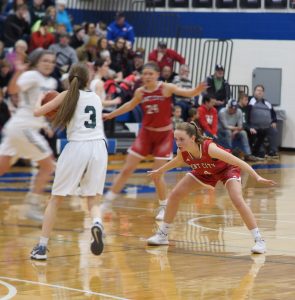 Varsity Girls Basketball @ MHSAA Regionals  (Kent City) vs. Pewamo Westphalia
Monday, March 11, 2019 @ 7:30 p.m.
This match-up has been talked about since the MHSAA released its tournament sites last May.  The Pirates ended Kent City’s season in the quarterfinals last year at Cedar Springs High School with a 45-30 victory that saw Pewamo-Westphalia maintain a double digit lead for most of the game.   In the next round, the Pirates fell to eventual State Champions, Detroit Edison 50-39, the same team who handed Pewamo Westphalia their only loss this season (54-39).  Detroit Edison moved up to Division 2 (on their own accord) which is good news for the winner of this game.

The Pirates are the most athletic team Kent City has played all season — they will run a pressure defense and challenge every shot.  The Eagles need to get off to a good start in this game, they can not dig themselves a hole early.  Kent City also needs to use their home Nest advantage — no one shoots better in the Nest than Kent City!  The Eagles need to limit the Pirates runs and make the most of every possession by knocking down open chances.   Confidence will be key and Kent City has no reason to fear anything in this game, they simply need to execute the game plan and good things will happen. 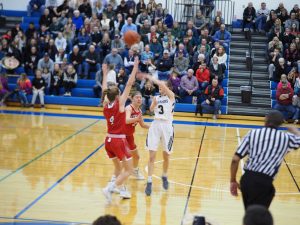 Varsity Girls Basketball @MHSAA Regionals (Kent City) vs. TBD
Wednesday, March 13, 2019 @ 7:00 p.m.
With a win on Monday, the Eagles will move on to the Regional Finals for the second consecutive season and third time in four seasons.   Last year Kent City got the monkey off their back advancing to the Quarterfinals for the first time in 29 seasons, the furthest a Kent City Girls Basketball Team has ever gone.   This year, the opening game will be much more challenging than the Regional Finals match-up.  The Eagles will play the winner of the Calvin Christian vs. Morley Stanwood game to advance.  We are very familiar with conference arch-nemesis Morley Stanwood who Kent City defeated in both meetings (47-37 and 74-30).   Kent  City has not played Calvin Christian since 2015-2016 when they defeated them 62-44 in a non-league game.  The Squires are 11-11 this year with only one common opponent on their schedule (with the exception of Morley Stanwood on Monday), West Michigan Christian.  In the first game of the season, W.M.C. defeated Calvin Christian 55-48, which was a long time ago.  Over their final eight games, Calvin Christian has won seven.