Are you getting tired of talking about the weather?  I am.   It seems that a good portion of my days are spent watching the different forecasts, and trying to predict which forecaster predicted the day’s weather correctly.  I have spent so much time watching the weather, I thought I would try my hand at offering my own predictions.  This week’s forecast for Kent City Athletics is calling for a calm before the storm that will begin on Friday and then continue into March Madness.

Our teams will spend most of this week preparing for the big stage.  The bowling team is readying themselves for a run at a regional championship with an accumulation of individual qualifiers on Saturday.   The varsity boys basketball team will experience a record breaking warm-up from their previous meeting with Holton, a heat wave they will ride into next week’s MHSAA Districts at the Nest.   Over in the wrestling room, it will be a quiet week before we experience a flurry of activity as our three state qualifiers head to Ford Field for the MHSAA State Finals on Friday, March 1, and Saturday, March 2.  Perhaps the one to keep the closest eye on is the storm that is brewing in varsity girls’ basketball – this one will make the polar vortex pale in comparison – another state of emergency type deal.   The Eagles prepare for back to back regular season games that would be hard to rival in terms of magnitude as they close their 2018-2019 regular season.

The good news is we have some time to prepare.   However, looking at the extended forecast, you are going to want to cancel any travel plans and stay tuned to www.kentcityathletics.com as we experience what could be the storm of the century.

On Saturday, three of the five wrestlers who qualified for the MHSAA Individual Regionals at New Lothrop qualified for the state finals at Ford Field.   Senior Evan Jones remains perfect in his state finals appearances, with four trips in four seasons.   Jones finished in 2nd place again on Saturday, falling 5-0 in the finals to his opponent from Carson City Crystal.  Joining Jones will be junior Jayden Williams who, like Jones, finished in 2nd place on Saturday to the same opponent.   Senior Alex Russo also made it to the podium with a third place finish, winning 4-2 in the consolation finals.

The varsity boys basketball team picked up their tenth win of the season on Friday night with a 50-15 victory over Hesperia.  Senior Giovanni Weeks led Kent City with 12 points while Max Hudson added 11 points.

Kent City’s girls’ basketball team ran their record to 14-2 with two victories this past week over rival Sparta (62-37) on Tuesday and CSAA Silver foe Hesperia (80-22) on Friday.  The war on the ridge has been a one sided affair, for at least the past 16 years with Kent City winning 15 of those meetings.  Senior Zara Weber led Kent City with 16 points while sophomore Kenzie Bowers added 13 points.   Against Hesperia, it was the same two scoring leaders but in reverse order as Kenzie Bowers hit for 23 points, while senior Zara Weber pumped in 22 points.   With the win, Kent City clinched their fifth consecutive CSAA Silver championship as they now stand at 9-0 in conference play.

If you have young children, or know someone who has does, we are still accepting signups for round two of swim lessons at the Kent City Pool.  Our Monday night sessions run for six weeks and begin on Monday, February 18, 2019.   We are also signing up children for our Saturday morning swim lessons which will run for five consecutive weeks and begin on Saturday, February 23.   For more information, use the following link: 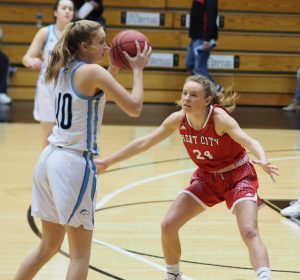 Varsity Girls Basketball vs. Cedar Springs
Tuesday, February 19, 2019 @ 7:00 p.m.
Kent City welcomes birds of a different feather into the Nest on Tuesday night as Cedar Springs comes to town.   The Red Hawks are 7-8 on the season and 3-6 in the O.K. White Conference.   Kent City can’t take the Red Hawks lightly – Cedar Springs is a class A school playing in a conference made up of primarily other class A schools.  They are athletic and have the ability to knock down triples if the defense is not extended.  Perhaps their best attribute is their defense.   Cedar Springs finds ways to limit the opposing team’s best players and keep’s scores low, only giving up over 50 points three times this season.   On Friday, the Red Hawks held O.K. White leading Northview (13-1) to just 43 points in a losing effort (43-29).  Kent City can make a statement not only by beating Cedar Springs, but also by how they beat them.  The Eagles are one week away from arguably the most anticipated regular season games in the history of the girls’ basketball program, but first they must navigate Cedar Spring’s defense. 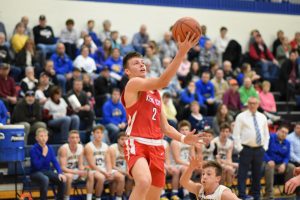 Varsity Boys Basketball @ Holton
Friday, February 22, 2019 @ 7:30 p.m.
In their final regular season game of the season, Kent City will be jockeying for position in the CSAA Silver with host Holton.   The Red Devils came into the Nest in January and simply outplayed Kent City for four quarters.  Kent City jumped out to an early lead scoring six of their ten first quarter points in the first minute of the game.   That’s when Kent City went ice cold and Holton took full advantage.   Kent City could not dig themselves out of the hole they had dug for themselves, losing 52-47.   A win on Friday night forces a tie for 2nd place in the conference, a disappointing consolation prize for the 2018-2019 Eagles.   However, all is not lost.   The following week, Kent City will play host to the MHSAA Boys Basketball Districts featuring some of the most talented Class C teams in the area.   A win on Friday will go a long way into helping Kent City gain momentum as they head into the post-season.  It is called March Madness for a reason – a team like Kent City with four losses of less than five points will have the potential to make some noise, especially with home-court advantage in the first round. 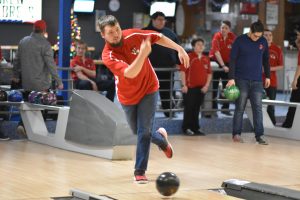 Varsity Bowling @ MHSAA Team & Individual Regionals (Sherman Lanes)
Friday, February 22 (9:00 a.m.) and Saturday, February 23 (8:00 a.m.)
It is a big week for the Kent City bowling teams as their post-season tournaments begin on Friday and Saturday.   On Friday, Kent City’s boys’ team could make a run at the top three and qualify for the MHSAA State Finals as a team but they will need to get off to a good start in the Baker’s games if they want to keep pace.   Last year, Kent City had similar hopes, but fell out of contention in the six Baker’s games.  The Eagles had the same issues this year in the CSAA Silver finale against Lakeview, losing both Baker’s games and then outscoring the Wildcats 14-5 in the Peterson games.  Kent City and Lakeview tied in that match, the same Lakeview team who is also eyeing a top three finish after falling four pins short of qualifying as team in 2018.

On Saturday, Kent City has four boys and two girls who will contend for a top ten finish and a trip to the MHSAA Individual Finals.  For the boys, senior Mason McVicker will attempt to make a return trip after finishing in 5th place as a junior.   Senior Nick Brummel and sophomores Ty Pyne and Curtis Poling have a good chance as well in what should be an experienced field – eight of the ten qualifiers are back in a group that was separated by 34 pins from first (195 average) to tenth (189 average).   For the girls, senior Chelsea Torres made a run last year at Regionals, finishing in 22nd place after a slow start and equally slow finish.  In the four games in between, Torres averaged a 158 which if she could have kept that pace for all six games, would have qualified for the finals.  Freshmen Peytin Brake should also be among the leaders when the dust settles on Saturday.  Last year’s cut-off to advance to the finals – a 155 average.