For most of the 1st half of the Eagles’ 13-6 victory over perennial football power Beal City, it appeared that Kent City’s 14 game regular season winning streak might be in jeopardy.  In the end though, Kent City persevered and found a way beat the Aggies on their home turf. However, beating a Beal City program that has spent 17 of the last 18 season in the MHSAA playoffs (including five appearances in the state finals during that time) was not the biggest victory of the week for the Kent City Football Family.   Rather, the premature birth of Defensive Coordinator Cameron Kutzli’s son Easton and his progress in the Neonatal Unit at Helen Devos Children’s Hospital has been the most important victory for the Eagle Nation to celebrate.  Earlier in the day, the varsity football team visited Coach Kutzli at Helen Devos Children’s Hospital.  Although we were not able to meet the future Eagle football star, Coach Kutzli took the opportunity to show the team pictures and explain the road ahead for Easton Kutzli. 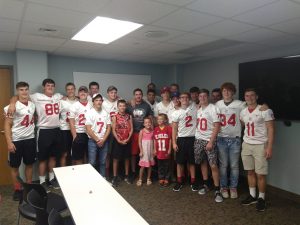 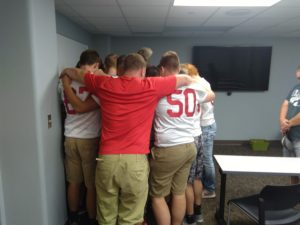 The Aggies jumped out to 6-0 1st quarter lead on their very first possession of the game.  Beal City put together a 14 play 62 yard drive.  On the extra point try, senior Nick Coalter broke through the line and blocked the kick.  On Kent City’s next two possessions, the Eagles punted and turned the ball over on downs.  The Aggies followed suit, punting on their next possession and turning the ball over on downs at the Kent City 5 yard line in what turned out to be a major play in the outcome of the contest.  On 4th and goal from the nine yard line, the Beal City quarterback scrambled left but was knocked out of bounds by Lane Dailey and Jayden Williams.

With ten seconds remaining in the first half, Kent City was faced with a 4th and inches from their own 12 yard line.  After a timeout to further discuss the situation, the Eagles elected to try to gain the 1st down.  Gio Weeks not only gained the three inches for the first down, he also raced another 3,168 inches for the first Eagle score of the game.  Senior Willie Salcedo added Kent City’s first extra point of the 2018 season to give Kent City a 7-6 lead. 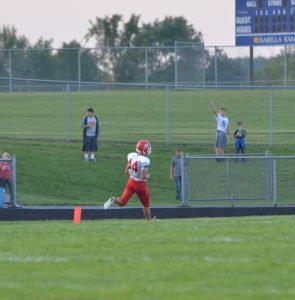 Kent City’s defense struck first in the 2nd half, forcing a Beal City turnover near mid-field when Jake Anderson hit the Aggie running back and Evan Jones pounced on the loose football.  The Eagles drove the ball all the way to the 1 yard line before Beal City stopped Kent City on 4th down.  It was Beal City’s turn.  The Aggies advanced to the Kent City 17 yard line before Evan Jones sacked the Beal City quarterback on 2nd down and Jayden Williams broke up a fourth down pass to give the Eagles the ball back minutes into the 4th quarter.  Following punts by both teams, Kent City began a 12 play 75 yard drive that would culminate in the game’s final touchdown.  Gio Weeks scored his 2nd touchdown of the season on a 4 yard plunge. Kent City elected to go for the 2 point conversion and a nine point lead, but Beal City was up to the task; Kent City 13 Beal City 6.

With under two minutes remaining, Beal City was on the move, advancing to the Kent City 40 yard line before Lane Dailey sacked the Aggie quarterback, causing the second turnover of the game which was again recovered by Evan Jones.  Kent City needed one more 4th down conversion to run out the clock.  This time, the Eagles used an off-sides penalty by Beal City to do just that.

Following the game, the Eagles posed for a picture to send to Coach Kutzli in what fittingly turned into a defensive struggle.  Coach Zach Gropp, who is filling in as defensive coordinator in Coach Kutzli’s time away from the team, made the key adjustments throughout the contest to give Kent City the edge. 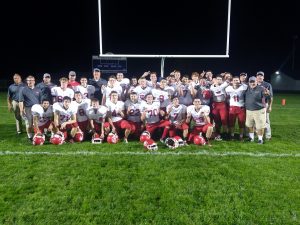 The victory improves Kent City’s record to 2-0 on the season and marks the end of their non-league schedule until week 8 when Lake City visits Ward Memorial Field.  Giovanni Weeks led Kent City with 207 yards rushing and two touchdowns.  The game garnered state wide coverage considering the Aggies have not opened the season 0-2 since 1999.   To see the game coverage, use the following links:

Next week Kent City returns to Ward Memorial Field for the 4th annual Military Appreciation game vs. White Cloud.  It also marks the beginning of the CSAA Silver schedule as Kent City pursues their 3rd consecutive CSAA Silver Championship.   All current military personnel and veterans will be admitted to the game for free.  We will once again be offering a tailgate catered by the Garden Patch for our nation’s heroes beginning at 5:30 p.m.  At 6:40 p.m. we will begin our pre-game festivities to honor those military personnel and veteran’s present at the game.  There are also rumors of a black hawk helicopter making an appearance.  You are not going to want to miss it!  Kickoff is set for 7:00 p.m.